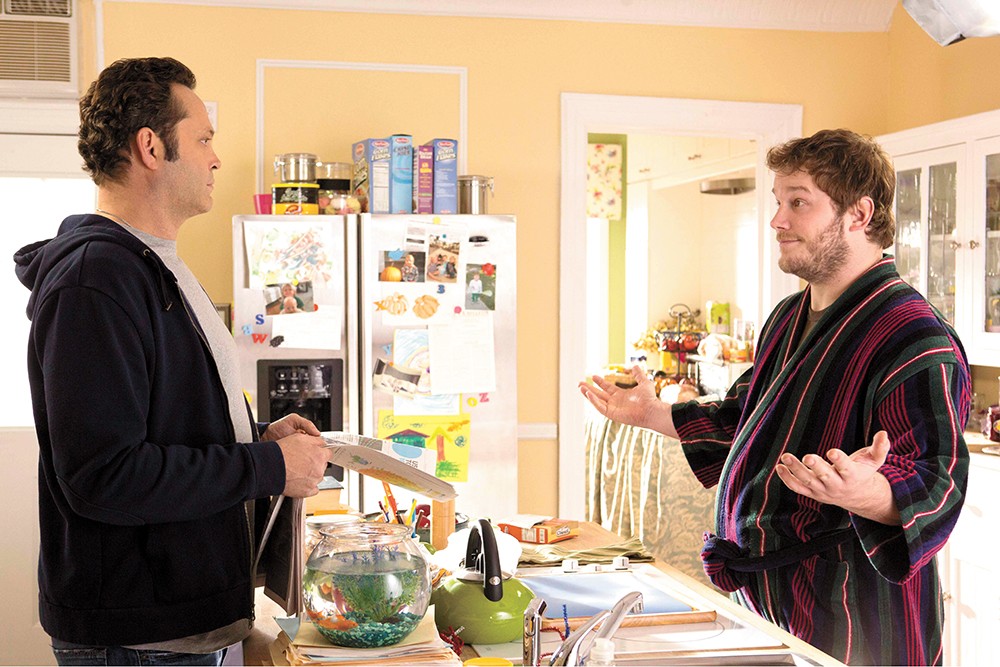 Believe it or not, these two guys are pretty serious in this movie.

Vince Vaughn isn't very funny in the latest Vince Vaughn comedy, and it's his best movie in years.

In Delivery Man, Vaughn plays David Wozniak, a well-intentioned screw-up who works as the delivery man at his family's butcher shop. When his girlfriend Emma (Cobie Smulders) announces she's pregnant and essentially breaks up with him in the same conversation, his world snaps into focus; being a father for the first time could really change things for him. That "first time" thing is just a little off, as he's informed that a sperm bank he donated to decades ago accidently overused his sample, resulting in 533 offspring. Now a group of 142 of Wozniak's previously unknown children, now in their 20s, are suing to find the identity of their father, code-named Starbuck.

Delivery Man is an almost direct translation by writer/director Ken Scott of his 2011 French-Canadian film Starbuck. While billed as a comedy, humor isn't Delivery Man's strength. But what the movie lacks in laughs, it more than makes up for in sweetness. Vaughn's jokes fall relatively flat — in part because they play too much on the same everyman buffoonery shtick he trots out for every role — but Chris Pratt delivers the comic punch as Wozniak's best friend and lawyer Brett. His belittling takedowns of Wozniak and jokes to his four little kids as an exasperated father consistently hit the mark.

When Wozniak is given a portfolio with profiles of all 142 offspring, he sneakily seeks them out and becomes a "guardian angel." He's an unexpected helping hand, whether enthusiastically subbing for a busker son or helping a daughter during a medical emergency. While meeting his offspring one by one, Scott's script and Vaughn's performance allow Wozniak to develop character depth well beyond Vaughn's stereotypical parts; he's more concerned with empathy than finding the next zinger.

Through the bonds Wozniak develops with his kids (and their relationships with each other), Delivery Man touches on themes of personal connection, family and destiny in a natural way. And while it appears only one of Vaughn's children is the least bit overweight and every potentially bad situation goes right, the momentary leaps of faith don't make the story feel less genuine.

Delivery Man might not be the comedic romp moviegoers expect, but its heart certainly is in the right place. ♦

Delivery Man is not showing in any theaters in the area.