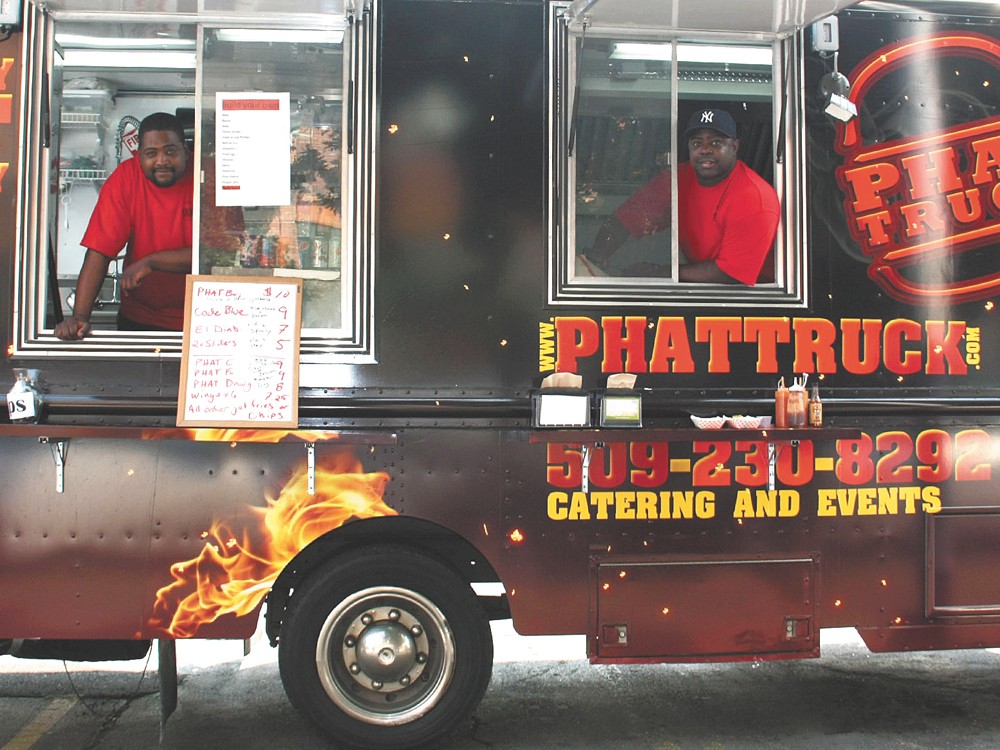 “We did wonderful, you can’t even imagine,” says Avont Grant, with some relief in his voice as he recalls The Phat Truck’s debut at Pig-out in the Park.

Phat Truck founder (and Grant’s cousin) Stoakley Lloyd explained that one of the food truck’s refrigerators had stopped working and at first there were difficulties in firing up the grill’s pilot light, but after six consecutive 16-hour days inside the boxy, flame-painted truck, the team, under the direction of chef Lesean Grant, refined its performance and menu.

The Phat Sliders ($5): whole beef patties grilled to an even medium and slathered in cheese and onions, beg to be tasted, not merely slid down a hungry throat. There’s a Code Bleu burger, with Cajun mayo and bleu cheese ($9); a Phat Chick featuring barbecue chicken, bacon, and ham; as well as the Phat Dog ($8), a Nathan’s frank with cheese and — yes — bacon.

Each item comes with chips or fries, and the chips are the unsung heroes of the whole enterprise — they are freshly cut and lightly fried. Crisp, warm and topped with seasoning salt, the fresh chips provide an excellent bed for the Phat Fidel ($9). A marvel of culinary architecture, the Fidel features ham, pulled pork, bacon, pickles, Swiss, chipotle mayo and stone ground mustard layered neatly between the pressed halves of a pub roll, and then pressed again. The pork is tender and the chipotle mayo gives an ever so slight burn — enough to remind a drunken mouth to chew.

But intoxicated patrons aren’t the only ones they feed. The Phat Truck has been setting up shop in the vicinity of Sprague and Washington from 10 pm ’til 3 am but, the truck is also open for lunch in the same area. On a recent Saturday, they provided an impromptu egg breakfast to the line in front of the Apple Store. The truck gets around, and will soon cater a tailgate event at Roos Field.

Lloyd isn’t opposed to expanding the business into a franchise and is willing to help other entrepreneurs set up a Phat Truck in Portland, Pullman or beyond. For now, the hours in Spokane are enough to keep the original team busy.

“I’m tired, but I’m happy. Working with my brother and cousin is really paying off,” says Avont.