A Nearby Earth-Size Planet May Have Conditions for Life 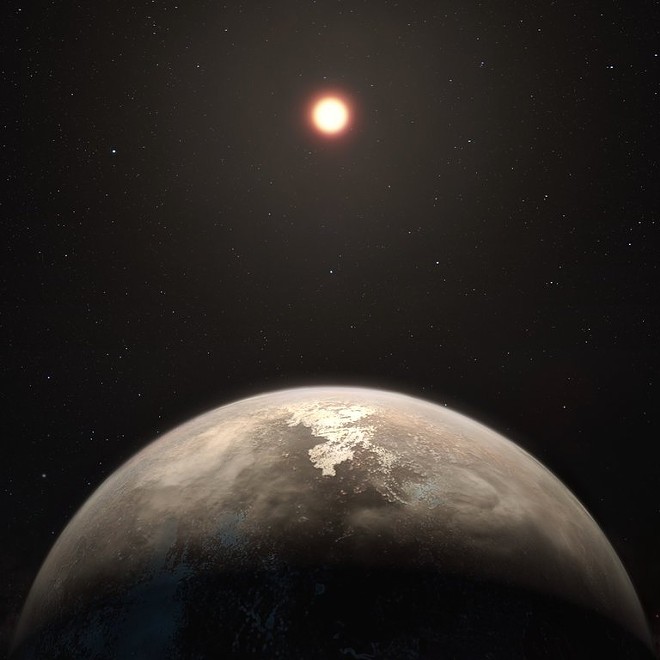 M. Kornmesser/European Southern Observatory
An artist’s impression of a newly discovered planet and its red dwarf star, Ross 128. The planet, 11 light-years away, is roughly the size of Earth but closer to Ross 128 than our planet, or even Mercury, is to our sun.
By KENNETH CHANG
© 2017 New York Times News Service


There’s a new place to look for life in the universe.

Astronomers announced Wednesday the discovery of an Earth-size planet around a small red star in our corner of the galaxy. The planet could hold liquid water and conditions favorable for life.

The star, Ross 128, is not the closest with a planet similar in size to ours. That would be the sun’s next door neighbor, Proxima Centauri, just 4.2 light-years away.

And there appears to be just one planet orbiting Ross 128 — not the bounty of seven Earth-size planets that circle Trappist-1, a red dwarf about 40 light-years from here.

But unlike those stars, Ross 128, about 11 light-years from Earth, appears to be a quiet, well-behaved star, without the violent eruptions of radiation that might wipe out any beginnings of life before they had a chance to take hold on the planet.

“Those flares can sterilize the atmosphere of the planet,” said Xavier Bonfils of the Institute of Planetology and Astrophysics in Grenoble, France, the lead author of a paper describing the planet. “Ross 128 is one of the quietest stars of the neighborhood.”

The findings appear in the journal Astronomy and Astrophysics.

The astronomers did not directly see the planet but instead used a telescope in Chile to measure wobbles in the wavelengths of light coming from the star. The wobbles are caused by the gravitational pull of the unseen planet.

If the newly discovered planet were the same distance from the red dwarf as Earth is from the sun, it would be frigid. But it is close enough to Ross 128 that it absorbs warmth sufficient for liquid water, one of the requisite ingredients for life, to potentially exist on the surface. (If anything, the planet may be too warm, more like the planet Venus.)