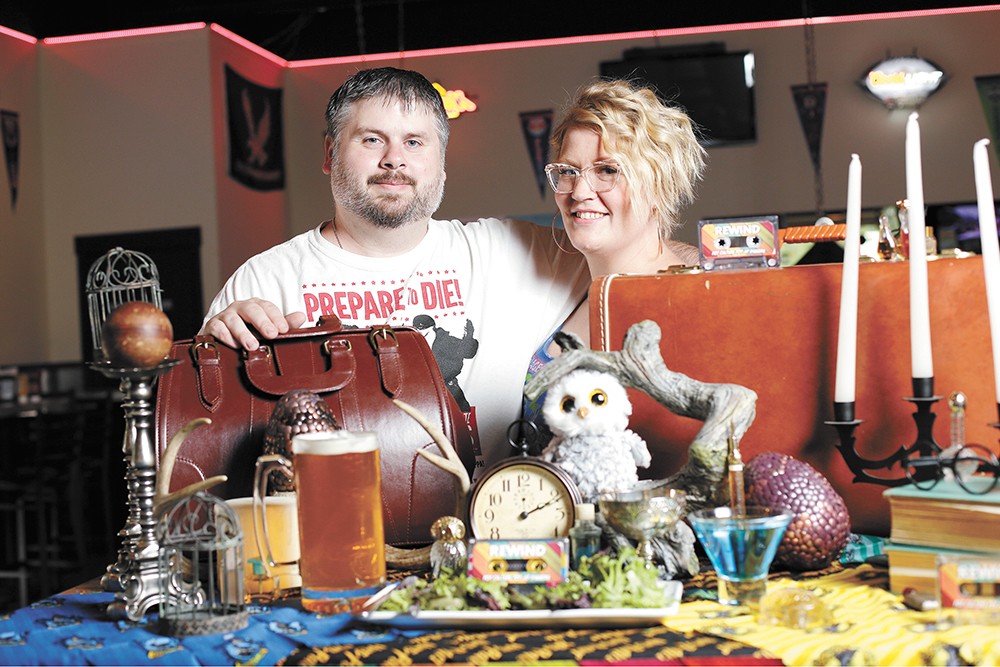 With food as the medium and some of the most beloved characters, worlds and stories in modern pop culture as the inspiration, a new local pop-up dinner series is bringing fictional realms into reality.

Rewind's second dinner, inspired by Saturday morning cartoons of the 1980s and early '90s, served dishes like "lasagna al Garfield," with "cereal milk ice cream" for dessert. Cheese boards for the first course were served on creatively upcycled mousetraps in a nod to Tom & Jerry. Guests were encouraged to come in pajamas to nostalgically relive a piece of childhood.

Next, Rewind is paying homage to the Boy Who Lived — Harry Potter — on the beloved book character's birthday, July 31.

Unfortunately for fans who haven't already reserved a seat, that event is now sold out. Rewind's organizers plan to, however, host many future themed dinners, and possibly some popular reruns.

Rewind is the creative venture of Spokane foodies Kris Kilduff and Sara Thorpe, a couple who share an appreciation for nerd and pop culture, and enjoying good food with friends.

"Outside of any food thing, I'm an uber nerd," Kilduff says. "I collect toys and things, and one thing I always did for fun was taking things like The Princess Bride and saying 'How fun would it be to create a menu that is all Princess Bride-themed?'"

On the menu for Harry's birthday dinner are dishes each inspired by spells from the book and film series' wizarding world.

"It's about the experience. Each one of our courses is somewhat interactive," Kilduff explains. "So for, say, dessert, the spell is a breaking spell, so we're creating a golden sugar cage that you break into to expose your dessert."

For each dinner, Rewind partners with many local artisans and vendors. Lucky Lady Bread, Bombshell Sweets gourmet cotton candy and Devin's Desserts are partners for the third dinner.

Those active in the region's culinary community may recognize Kilduff's name; he was an early adopter in local food blogging and has organized several local food-focused events, including the Restaurant Wars competition (currently on hiatus) and Secret Burger, a ticketed off-menu dining series. For Rewind's events, the self-taught chef does most of the cooking, all from scratch.

Thorpe, meanwhile, grew up in a restaurant-owning family, learning scratch cooking skills from her grandmother and parents. She's worked in the industry all her life; bartending, waiting tables and other positions. In addition to managing the front-of-house details for Rewind's dinners, Thorpe oversees each event's detailed decor to evoke an immersive atmosphere.

Most of the table and event decor is thrifted, upcycled or handmade by the couple, like dragon eggs made out of foam and spray-painted thumb tacks for the Game of Thrones' dinner.

"Every time we do one, we take over the room and recreate it into a scene from whatever it is that we're doing," Kilduff says.

For Harry's birthday, guests will be "sorted" into Hogwarts houses and throughout the evening can earn points for their house during activities. On-theme music, games and other interactive elements are always a part of each Rewind event.

Rewind's owners aim to keep ticket prices to under $40 per person. To do so, specialty cocktails and other alcoholic drinks are optional add-ons, which means the series is also all ages.

Upcoming pop culture dinners are announced on Rewind's social media channels, on Facebook and Instagram, several weeks in advance. Seating so far has been limited to between 40 and 60 people, hence each dinner so far quickly selling out. While the couple plan to host pop-up dinners at venues around the region, the first three have been at the Ref Sports Bar in Spokane Valley, in a private event space.

For Rewind's next event, on Sunday, Sept. 8, the theme is Stephen King's It, timed with the release of the sequel film, It: Chapter 2.

"It's going to be scary," Thorpe says. "It's all been so fun and whimsical, but this one is going to be very horror themed, and definitely for Stephen King fans."

The plan is for admission to include a pre-dinner showing of the film.

"Food has that nostalgia profile. Everyone has an 'oh my mom made this,' [moment]. Pop culture is the same... it brings you to an exact time and place," Kilduff reflects. "We really try and just spur that nostalgia when you come to these dinners." ♦

Oscar hosts with the most