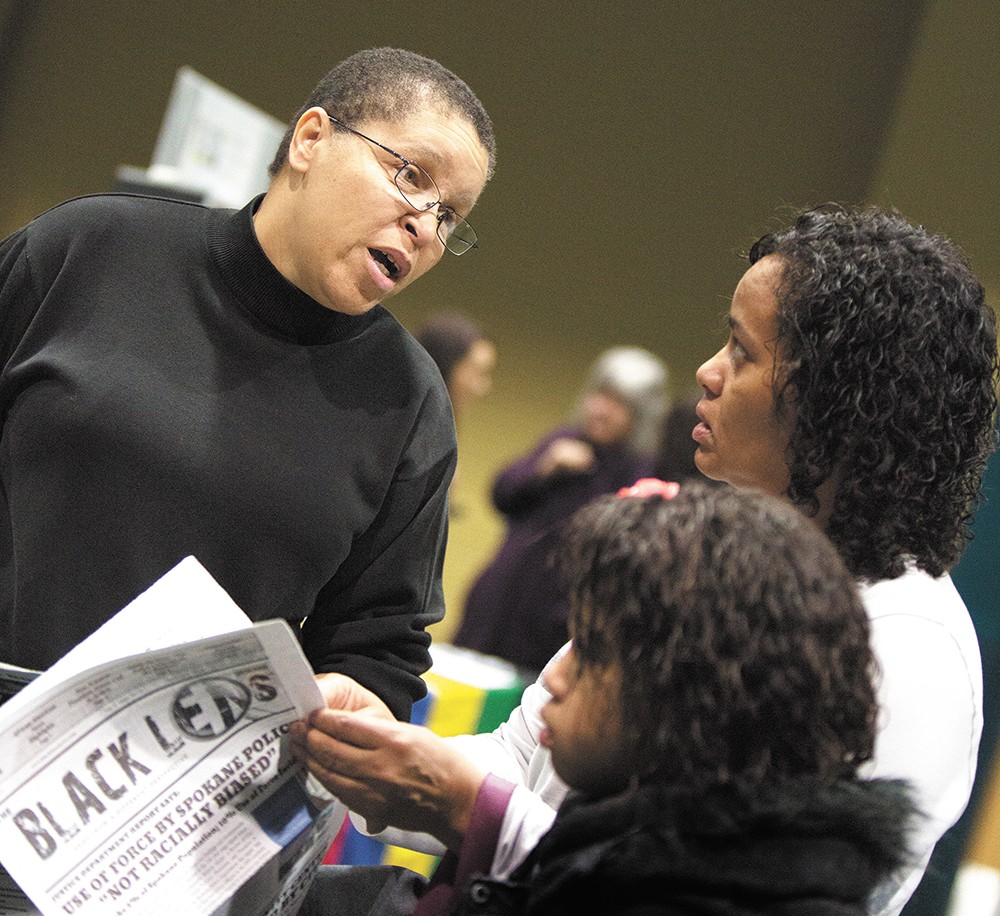 Young Kwak
The editor and publisher of the Black Lens, Sandy Williams, left, speaks with Charlotte Lewis and her daughter after the Martin Luther King, Jr. Day rally on Monday.

Sometime in the early '90s,

Sandy Williams was invited to sit on a community advisory committee for the Spokesman-Review. A social justice advocate for people of color and the LGBT community, she and the two other black people on the committee took the opportunity there to voice their concerns about the representation of African-Americans in the newspaper. It seemed, she remembers, that "you never saw folks, unless it was negative."

Committee members agreed they would commission a formal study on that matter, but Williams didn't see the point. Irritated, she went home and for the next month, clipped out every single article in the paper featuring a black person. At the next meeting, she dumped her findings in plastic baggies on the table.

"There were only three options," she says. "You either had your criminals, sports — there were a lot of those, a lot of sports stuff — or entertainers."

She writes about that experience in her inaugural editor's column in the Black Lens, a newspaper she founded a month ago for Spokane's black community. Williams, who later resigned from the committee, was frustrated, she writes, by what seemed like "not a lot of interest from the powers that be in addressing their portrayal of Blacks in a substantive way. And to be honest, decades later, it seems to me that very little has changed."

"I think I naively at the time believed that was going to incite some action, and it didn't," Williams says in her office at Eastern Washington University, where she runs the LGBT Pride Center. "We didn't feel like there was motivation to do anything about that. That was an eye-opener for me."

As protesters marched throughout the country in demonstrations against the deaths of Trayvon Martin, Michael Brown and Eric Garner, the timing for a new black newspaper "just felt right," Williams says. The mainstream media's depiction of African-American people, particularly boys and young men, has long been criticized as one-dimensional and potentially dangerous. Williams, the one-woman show behind the Black Lens, sees the paper as an opportunity to take that power back, create a platform for the black community to express themselves and tell stories from their perspective.

Williams is the first to admit the idea to start a black paper in the city isn't hers alone. Spokane has a century-long history of black community newspapers. At the turn of the 20th century, there was the Citizen, a five-cent broadsheet paper, and the Voice of the West, an illustrated magazine. In the '40s, the Spokane Star billed itself as the "Northwest's Leading Negro Weekly." In the late '60s, the Black Shoppers Guide was published by a group of citizens, "disturbed," the paper noted, "by the complacency and indifference of many residents in Spokane."

"It kept us informed of what was going on; it kept us in touch with each other and it showed us places of entertainment to go," says local historian Jerrelene Williamson, 82, who grew up in Spokane at the height of racial segregation across the country. "There were stories in there that let them know we were here. There weren't a whole bunch of us back at that time, but we were here."

In 1995, photographer Robert Lloyd and his wife, Diane, printed the first edition of the Spokane and Pullman African-American Voice. Staffed by about 20 volunteers — including founding editor Alfred Mutua, a journalism student at Whitworth College who went on to become the first official spokesman of the Kenyan government and later a Kenyan governor — the Voice operated on an "if you believe it, write it" mantra. Writers would gather in the Lloyds' living room at their South Hill home and debate the news. They wrote about Sandpoint folk guitarist Leon Atkinson, the radical "other side of Martin Luther King," the movie The Green Mile and the death of local civil rights pioneer Alfonse Hill.

"The beautiful thing about our paper was... it was nobodies," Robert says. "The little people, who were sitting around this room here, talking about those problems."

Robert built a database of 5,000 people whom he mailed his free paper to every month. He passed the Voice out at every black church on Sunday and distributed it at gas stations, restaurants, barbershops and beauty parlors around the East Central and West Central neighborhoods.

In 2000, the Lloyds stopped printing the Voice. They had lost their biggest advertiser, Nate Greene's Empire Ford, and their volunteer staff had graduated from college, left town or moved on. Although a version of the Voice still lives online at 4comculture.com — Robert's sporadically updated blog — people felt its absence. So about a year ago, Williams started seriously thinking about starting her own black paper. She met with Robert for coffee and received his blessing.

The reaction so far to the Black Lens, Williams says, has been overwhelmingly positive. Initially, she was worried about how the paper would be received by the black community, whether she would be accepted, whether they would welcome a publication that presumes to speak for them. Who am I to do that? she wondered.

"We're not a homogenous community. We're a diverse community with a lot of diverse thoughts and beliefs and ways of being," she says. "To try to capture that is challenging."

Putting together the paper was harder than she imagined, too. Williams, a self-trained journalist, wrote nearly every story in the 12-page paper, including a lengthy feature on management concerns at the East Central Community Center and an above-the-fold article on the Justice Department's report on Spokane police. ("African Americans make up 2.3% of the population of Spokane," she notes, "but 10% of Use of Force Incidents.")

She signed up for a black newswire service, bought a web address (theblacklensnews.com), learned how to mock up a paper and spent every night for two weeks writing, editing and tweaking until she finally emailed her publication to Garland Printing on Dec. 31. The Sunday after New Year's, she dropped copies off at every black church before services started. She took them downtown, to Chicken-N-More, the Martin Luther King, Jr. march and the NAACP meeting. She estimates she spent at least $1,000 out of pocket to publish and distribute her 500 copies. She didn't want any advertising in the first issue.

"It's sort of my gift to the community," she says.

In future papers, Williams hopes to explore issues like disproportionate African-American dropout and incarceration rates. She's currently getting to work on the February edition, collecting submissions from people who've offered to write articles and take photos.

"I really want to make sure that this community has a voice," Williams says. "I care about this community. I've known a lot of these people since I was a kid. And as I have grown up and have had different positions of authority, I have watched folks be sort of marginalized and not understand what to do about that. My hope is that I can give some voice to that." ♦