A Place to Call Home

The Bartlett still has miles to go, but the spirit of the new music venue is very much alive 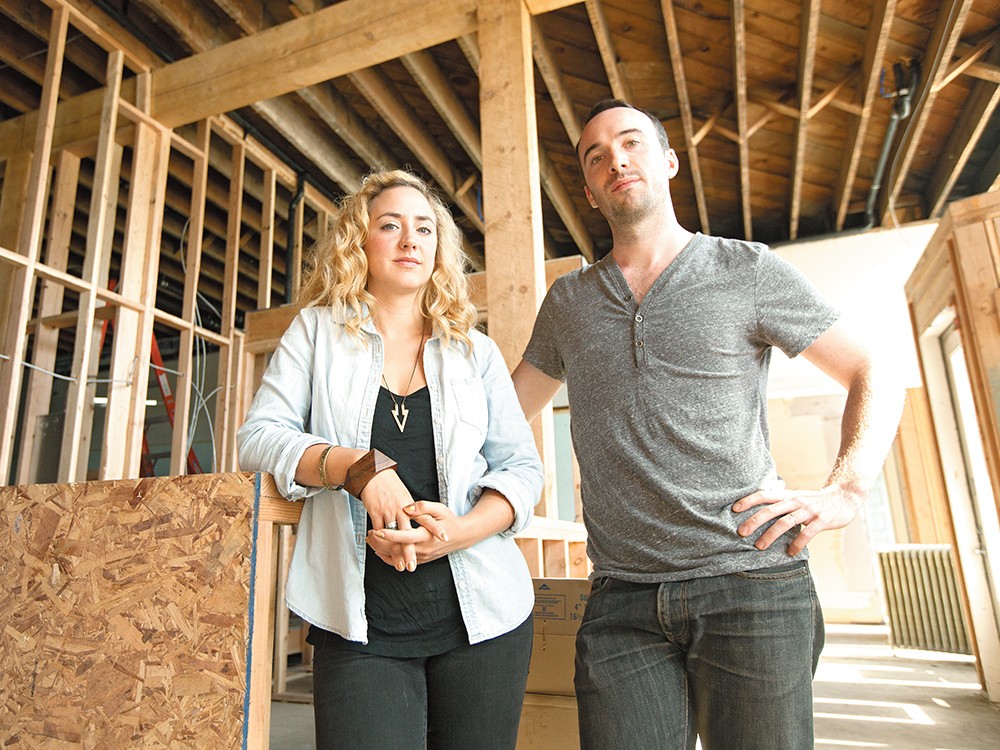 Young Kwak
Karli and Caleb Ingersoll inside the space that will soon become the Bartlett.

Progress is in full view. Tubing, rubble piles, sawhorses, electrical cords — one has to be careful not to trip over jagged edges while meandering through the Bartlett, Spokane’s soon-to-be-open all-ages music venue.

Envisioning where the stage and bars will be isn’t too challenging while touring the downtown old-brick structure — unfinished slats stand as placeholders.

This dusty space is Caleb and Karli Ingersoll’s baby. They want the feel to be modern. Exposed walls, white and black space, minimal artwork. But the building hasn’t been occupied in 10 years.

Last week, Caleb made the leap and quit his job as a sound technician. He and his wife are now official business owners of a place that won’t be open until November. The vision: to cultivate the local music scene, help it evolve, make sure young people can get involved.

“It’s a no-brainer for us to create an all-ages venue,” Caleb explains. “We both grew up going to shows, and we want the next generation of Spokane to be able to experience that too.”

This will not be just another place hipsters go to hang out and drink Pabst Blue Ribbon. While there will be alcohol (only wine and beer), the venue will not focus on the beverages — it’s about the music. That’s why everything will be set up with musicians in mind.

From the state-of-the-art sound system to the built-in merchandise booth, the pair is going off of what they expect of a venue. As touring performers, both as solo acts and with their band Cathedral Pearls (currently on hiatus in lieu of the Bartlett), they’ve catalogued a wish list of what they require.

They’ve had this dream — to have a venue of their own — even before they got married three years ago. After waxing poetic to enough friends and family about it, they were encouraged to start an Indiegogo account, which raised $21,000 to throw at the idea.

But the toughness of the industry isn’t lost on them. They’ve watched as numerous live music clubs shut down in this town.

“We expected this thing to be impossible,” Caleb says. “We looked at eight or nine different buildings and found the process discouraging. We weren’t sure we’d find something.”

But then their friend Dan Spalding stepped in. The well-known local artist had just bought a property and thought it would make a great space for live music. The couple agreed.

While the neighborhood doesn’t cater to the country club set, with nYne next door and Mootsy’s and Jones Radiator, among others, coloring in the Sprague Avenue blocks, the Ingersolls believe it will work well for their operation.

But how will they succeed where countless others have failed?

The plan is to open the front part of the space every day at noon, sell coffee and choice nibbles during the day, then turn into a bar at night. The back area, with the stage, will host four or so acts a month along with a weekly open mic.

“From touring around, we’ve seen that having a separate part is huge,” Karli concludes. “Dual income with a separate café allows us to make money, as the shows won’t.”

Cover charges will be a bit more substantial than the usual $3 to $5 range you might find at a dive bar. They see the 200-capacity space as a stepping stone to the Knitting Factory. The goal is to bring in more national acts with local openers.

“We want this to be a higher quality experience,” Karli says. “There won’t be that many shows happening every month, so we want this to be more of the ‘fine dining’ venue of the music scene.”

There’s already been a setback. The soft opening, scheduled for Oct. 6 and featuring Pickwick, has been moved next door to nYne, but the Ingersolls aren’t deterred. They’ve booked multiple shows, including Sallie Ford & The Sound Outside and Shelby Earl, for the end of the year. They’re charging ahead.

“We care about this scene,” Karli says. “We come into this business with a musician’s perspective. We’re almost there.”

Speaking of Preview 2013 , The Bartlett