In the race for governor, boring old problem-solving trumps the excitement of ideological warfare 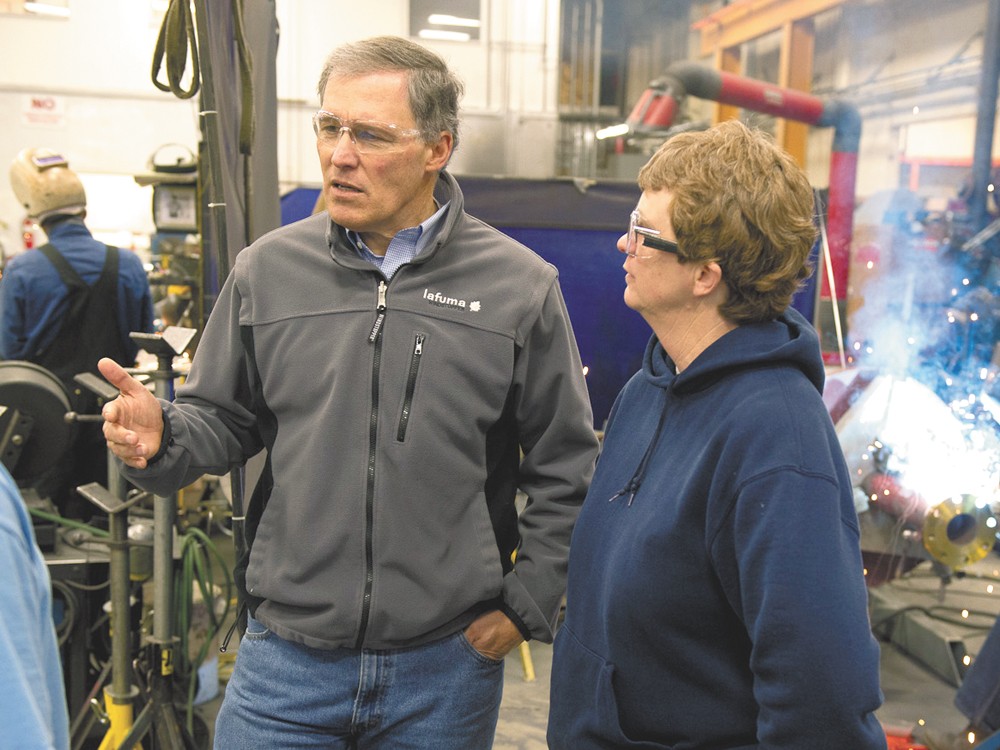 Jay Inslee visits MacDonald-Miller’s shop. The West Side contractor is a leader in energy-efficient construction.

Washington is getting bluer and bluer, so to become the first Republican governor since 1985, Rob McKenna needed a perfect campaign. He has been a solid attorney general, a smart campaigner with appealing ideas, but one thing has stuck out — and it may cost him the election.

When McKenna joined the lawsuits being filed by many states to challenge the Affordable Care Act, he got out ahead of public opinion in this state, which favored the ACA. He told the state the sweeping new law was unconstitutional. He clearly believed that. Sometimes an elected official has to follow his or her conscience — but when they do, they better be right.

The Supreme Court judged that he was wrong. The law is constitutional. The entire episode reveals the kind of leader he might be, and it’s a big red flag.

A governor needs to be more practical than political; governors can’t punt our problems and hide behind TV ads the way Congress can. They need to live in the real world. But that’s not stopping governors around the nation from turning their offices into clearinghouses for all the nutty ideas that fire up the fringes of their party. Restricting voting rights and creating new rules for women exercising their right to choose are just two recent examples of governors gone wild.

In signing all Washingtonians onto that lawsuit, McKenna showed himself to be cut from a similar ideological cloth. We don’t need someone to join in the games the GOP likes to play. We need a problem-solver in Olympia.

The AG’s office is probably a better training ground for a governor — it’s a complex operation that requires strong leadership. But Jay Inslee’s political career has prepared him well, too. He knows both sides of the Cascades, as he has served in Congress representing districts on both sides of the mountains. And he’s has spent his time wisely, listening to constituents and developing into a big-picture policy wonk with progressive, original ideas about economic development.

Jay Inslee also understands the correct balance we must strike between austerity and investment. For too many, the answer to every question is always less government, less public investment. Tough choices are being made all over the state, but we cannot categorically sacrifice our long-term quality of life to obstinate orthodoxy. The governor needs to defend the good things that have been built in this state, so that when the economy does bounce back Washington is ready for the new opportunities. Jay Inslee is best equipped to be that governor.

Washington state voters aren’t sure what to make of the candidacy of Michael Baumgartner to replace Maria Cantwell — we were just getting to know him here in Eastern Washington when he decided to run. Baumgartner has plenty of ambition, but little experience. He proves how empty the Republican bench has become in Washington. Maybe big-name candidates are sick of getting beat up on by Cantwell and Patty Murray. Both Senators are very popular and very good for Washington state.

Yes, the amount of money sitting U.S. Senators routinely have on hand to demolish challengers is quite obscene, but that’s a longstanding, bipartisan arrangement. What matters most is that Cantwell is on the right side of many issues for Washington, in particular her advocacy for the innovation economy.

In a busy election, it can be hard to keep up with the issues all down the ballot. But the Washington Attorney General is the state’s second-most powerful job and deserves the voters’ attention. We don’t know the two candidates much here in Eastern Washington — Bob Ferguson and Reagan Dunn are both members of the King County Council, where Rob McKenna served before he became AG.

The attorney general leads 500 attorneys advising and defending the state’s agencies and Legislature. Sometimes they get themselves into a big, national fight, as Chris Gregoire did in the tobacco settlement and McKenna did in challenging the Affordable Care Act.

There’s a lot of talk that neither of these men have enough experience, having been elected officials longer than they’ve worked in private practice. Bill Clinton, it’s worth remembering, had almost zero experience when he became the Arkansas AG at age 30. Still, Dunn’s brief stint as a federal prosecutor does stand out as one edge over Ferguson.

Named for Ronald Reagan (for real), Reagan Dunn is also the son of the West Side’s legendary congresswoman, the late Jennifer Dunn. Another edge is that he has a leader’s natural ease. Dunn is also socially moderate, as he supports gay marriage, believes in climate change and supports a woman’s right to choose.

Washington needs two good political parties to function, and the GOP is losing ground statewide. Dunn could wake up on Nov. 7 as the de facto leader of the statewide party. He’s a solid choice for AG — and to be a role model for his party’s rebuilding project.

Lisa Brown’s sudden retirement was a blow to Spokane, as she had been such an effective advocate for so many local projects — and for our most vulnerable citizens. So we’re lucky to have Andy Billig, all warmed up and ready to come on in relief.

Billig has already worked on the medical school for the Riverpoint campus, he helped write the budget that included funds for the North Spokane Corridor and he has worked to protect the Spokane River. Billig will hit the ground running.

As a local business leader, and more recently as a legislator, Billig has shown an even temper and open mind. He has run a tireless, positive campaign that proves a solid work ethic — and that he’s more interested in solutions than playing political games. Too often, these politically charged times are counterproductive to the people’s needs. That’s why we need more leaders like Andy Billig who stay focused on getting the job done.

The 3rd District faces some of the toughest economic issues in the state; it’s also the heart and soul of Spokane and the Inland Northwest, so it needs effective representation.

Timm Ormsby has been working hard behind the scenes in Olympia to deliver for the district for nearly 10 years now. His background in the building trades helps him connect with the issues that working people are dealing with.

Marcus Riccelli has had a front-row seat to state and local politics for years now, as an aide to both Lisa Brown and Maria Cantwell. Now he’s ready to take his place in the seat so ably held by Andy Billig. Riccelli brings a fresh perspective that’s in keeping with the overall youth movement we’ve seen in the ranks of our local leadership.

What do you do if your state representative seems to be way off the deep end? He votes “nay” on almost everything in Olympia. He berates fellow Republicans in public. He won’t share his views with constituents via the local media. He even menaces fellow citizens with a handgun. Sadly, if you live in Spokane Valley you may just vote for him anyway.

Amy Biviano is an accomplished candidate who has the smarts and perspective to represent the 4th District in the way it deserves. It’s a lively mix of urban, suburban and rural, and it has a great future — if more of its residents will let it blossom.

But even if you can’t stand Democrats, consider voting against Matt Shea so that a good Republican can take his place on the ballot two years from now.

Check out Commentary next week for more endorsements.