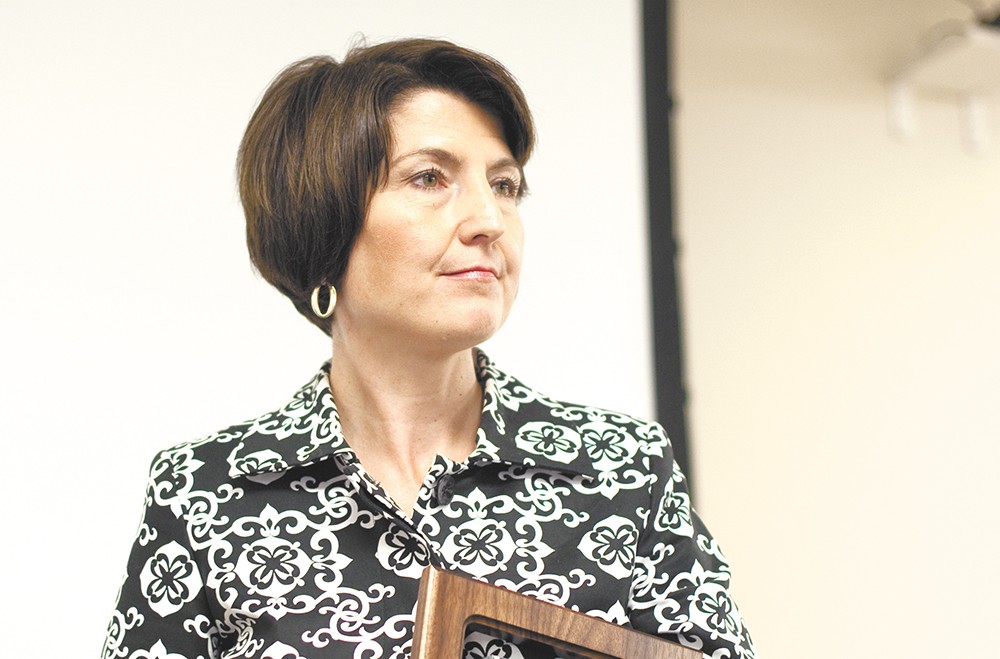 Since she was first elected to Congress in 2004, U.S. Rep. Cathy McMorris Rodgers has become the highest-ranking Republican woman in the House of Representatives. Then in January, her star power rose when she was tapped to deliver the official Republican response to the president's State of the Union address — the first woman to do so in more than a decade. Before that, she made history as the first member of Congress to give birth three times in office.

She has been heralded as a trailblazer, a "Supermom" and the Republican version of a feminist icon.

But to her critics, McMorris Rodgers is little more than "window dressing" for the Republican Party, to quote Marcy Stech, the national press secretary for EMILY's List, a political action committee that backs Democratic women candidates who support abortion rights.

"What we see, day in and day out, is Republicans continue to be on the wrong side of women and families in this country. They continue to block access to health care, to be against raising the minimum wage and against equal pay for women," Stech says. "I think the bottom line is, being a woman does not make you a pro-woman candidate."

McMorris Rodgers is seeking re-election this November against Democratic challenger Joe Pakootas, who — like nearly all Democrats in U.S. congressional races this year — hopes to win over female voters by drawing attention to his opponent's record on issues affecting women and families. Here's a look at how she's voted on equal pay, the Violence Against Women Act and entitlements for the poor and out-of-work.

On Equal Pay for Equal Work

During his State of Union address last January, President Obama announced, to rousing applause, that "a woman deserves equal pay for equal work." In an interview with CNN's Wolf Blitzer the next day, McMorris Rodgers said she agreed with the president.

But McMorris Rodgers voted against laws intended to end pay disparity between men and women. In 2009, she voted against the Lilly Ledbetter Fair Pay Act, a current law that gives victims of pay discrimination more to time to file a complaint, calling it a "treasure chest for trial lawyers" in an interview with Glamour magazine in September. That same year, she voted against the Paycheck Fairness Act, which would have updated the Equal Pay Act of 1963 banning gender-based pay discrimination. Passed by the House in 2009, the Paycheck Fairness Act would have, among other things, prohibited employers from retaliating against workers who disclose their wages and strengthen penalties for pay discrimination.

On the reauthorization of the Violence Against Women Act

In 2012, McMorris Rodgers opposed the Senate version of the reauthorized Violence Against Women Act, which added new domestic violence protections for same-sex couples, Native Americans and undocumented immigrants. She sponsored a stripped-down version of the bill in the House that excluded those protections before ultimately voting for the Senate bill a year later. In an interview on MSNBC's Hardball, she said the bill shouldn't feature protections for lesbian, gay, bisexual and transgender people because they are "side issues."

"There's nothing under federal law that currently recognizes same-sex couples," she continued. "So if we're going to have that debate in Congress, it should be a separate debate from the reauthorization of the Violence Against Women Act."

On food stamps and unemployment insurance

Last year, McMorris Rodgers voted with House Republicans to slash $40 billion from the Supplemental Nutrition Assistance Program. A few months later, in December, she joined congressional Republican leadership in blocking an extension of long-term unemployment insurance, cutting off 1.3 million jobless Americans from benefits. In taking these positions, her opponent, Pakootas, has criticized McMorris Rodgers for voting against the needs of her constituents.

"Twenty percent of our people live on food stamps, and a great number of that is children and young people," he says. "One in six people in the 5th Congressional District live below the federal poverty level, and our unemployment rates are 30 percent higher than the federal unemployment rate." ♦