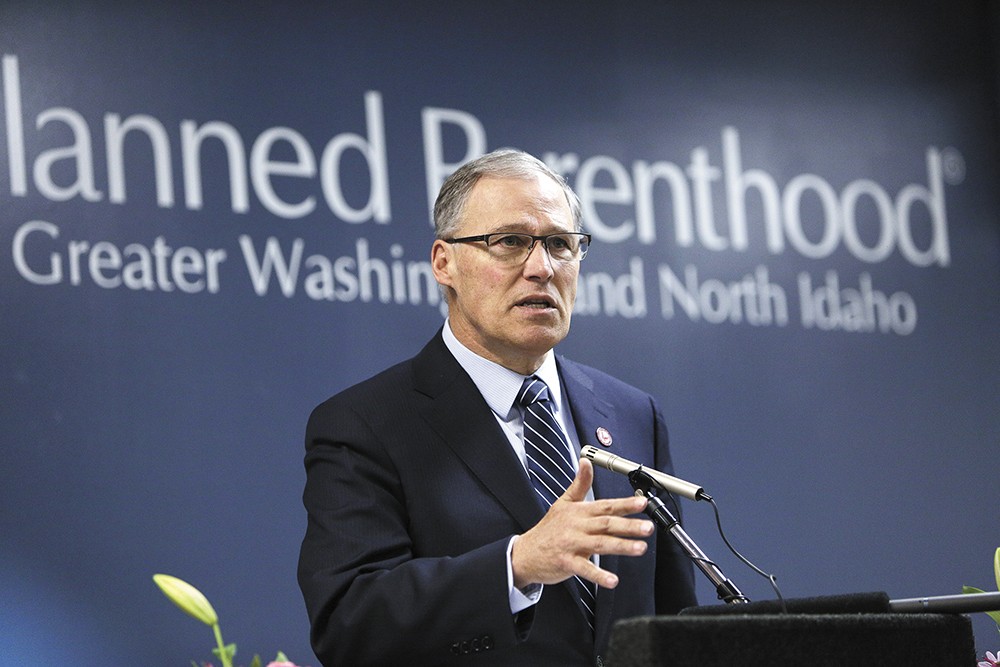 Young Kwak
Gov. Jay Inslee says Washington state will do whatever it can to fight proposed changes to the federal Title X family planning program.

When Alisha Merkt thought she might be pregnant about a decade ago, she wasn't sure what to do.

A friend told her about the Planned Parenthood health clinic in Kennewick, and despite the fact she made little money at the time, she was able to get an appointment and take a pregnancy test. As it turned out, the then-20-year-old wasn't pregnant. She received counseling on her reproductive-health options and learned she qualified for a free year's supply of birth control; each service was meant to prevent a future "pregnancy scare" and give her more control over her health.

"They were there for me when no one else was," says Merkt, who started volunteering for Planned Parenthood in Spokane in November 2016. "It's nice to know this is here."

But that same safety-net family planning that was provided to Merkt could be in jeopardy if proposed changes at the federal level are instituted, and it's not just Planned Parenthood clinics that are at risk.

In June, the Trump administration proposed changes to the federal Title X family planning program that would prevent doctors receiving Title X funding from speaking to patients about abortion unless a client brings it up on their own. Doctors also would no longer be allowed to refer that patient elsewhere for abortion services. The changes could require not just financial separation of federal dollars from money that pays for abortion, as currently required, but also a physical separation, which could mean requiring separate waiting rooms, staff or facilities.

"We have heard from our clinics that for most of them, meeting the physical separation requirement would be extraordinarily difficult," Fehrenbach says. "We expect many of them would drop out of the program if they were required to physically separate their programs. It could be hugely disruptive to our state if the draft rule goes forward as proposed."

The federal Department of Health and Human Services hasn't released an official timeline for the final wording of the rule, and an HHS media spokesperson said the timing wouldn't be clear until the more than 200,000 public comments submitted on the draft rule had been reviewed.

However, according to the nonpartisan health care-tracking Kaiser Family Foundation, current Title X funding ended on Aug. 31, and the final regulations are likely to be published in September, with implementation or legal challenges expected soon after.

Supporters of the new requirements, including many pro-life groups, say the changes are needed to keep federal money out of abortion, which they believe is not a valid form of health care or contraception. They argue other federally qualified health care clinics could pick up the family planning caseload if Planned Parenthood were to no longer qualify for Title X funding.

Meanwhile, health care providers and women's rights advocates argue that the changes would not only interfere with the right of patients to get complete medically accurate information from their doctors, but could also have negative health impacts.

"All of our clinicians feel it's a vital service to those folks who are in their childbearing years," says Barbara Middleton, chief operations officer for the NEW Health Association, which operates health clinics throughout Ferry, Stevens and Pend Oreille counties. "If there are limitations put on that service, then I think it would have a detrimental effect to the community as a whole, with potential increased pregnancy rates, increased seeking of alternative care that might not be in our best interest, and some people maybe not seeking advice or care altogether."

Title X is intended to prevent unwanted pregnancies and promote reproductive health by providing low-income patients with educational information, access to family planning methods such as birth control, screening for cancer and sexually transmitted infections and diseases, and more.

The Washington State Department of Health receives and distributes about $4 million per year in federal Title X funding, along with another $9 million from the state, which goes above and beyond the required 10 percent funding match for the federal money, Fehrenbach says. The department officially requested the federal government withdraw its proposed rule, citing "serious and grave concerns" about potential impacts to community health, particularly in rural areas.

In late July, Gov. Jay Inslee met with staff and volunteers at Planned Parenthood's Spokane clinic to offer his support for their work and rebuke the plan. If it comes down to it, Inslee said, the state will fight the measure in court as illegal and unconstitutional. If it still goes into effect, Washington could quit the federal program.

"We're going to fight the Trump administration every way we can," Inslee said, "because we are not going to be complicit in their effort to take away birth control, take away protection against STDs, [or] take away the woman's right of choice."

Inslee said he'll expect to work with state lawmakers to find a way to fill the $4 million funding gap if absolutely needed.

Many medical associations also submitted letters opposed to the changes, as they would interfere with the doctor-patient relationship and go against medical ethics, which require doctors to provide complete, medically accurate information to their patients.

If left unchanged from the draft language, the proposed rule would:

Prevent doctors from discussing abortion as an option unless a patient specifically asks them to, and then they may only counsel them in a way that doesn't promote the option.

Prevent doctors from referring patients elsewhere for an abortion. Instead they could provide a list of other health providers, "some (but not all) of which provide abortion."

Planned Parenthood operates 11 clinics throughout Central and Eastern Washington and served 80 percent of the more than 82,000 Washington state contraceptive clients who received Title X services in 2015, according to a report compiled for a Washington State Senate committee this year.

Due to a lack of other family planning service providers in rural areas, those clinics also serve people from neighboring Eastern Oregon and Idaho, Dillon says.

"This is something that expands beyond Planned Parenthood alone," Dillon says. "It's an attempt to take away women's basic rights, period."

Proponents of the changes have argued that other health clinics could pick up the slack if Planned Parenthood were to no longer receive Title X funding, but that's not true, according to the Washington State Senate report and health officials.

To take on just the role of providing contraceptives to low-income people in Washington would require other clinics to increase their caseloads by more than 400 percent, the report concluded. That doesn't factor in cancer screenings, testing and treatment for sexually transmitted infections and diseases, or other preventative measures covered by Title X.

"Our experience and conversations with [Federally Qualified Health Centers] is they could not afford to take on those potentially 80,000 clients that receive services from a provider that uses non-Title X money to provide abortion," says the Department of Health's Fehrenbach.

Those opposed to the changes have dubbed the proposal the domestic "gag rule," for the effect it would have on information shared between doctor and patient. If a global version of the "gag rule," known as the Mexico City Policy, is any indicator, the policy changes could also have an effect opposite to the pro-life goals of those who want abortion providers to be shut down.

Ronald Reagan was first to instate the policy. While Democrats Bill Clinton and Barack Obama repealed it during their time in office, the Republican Bushes kept or reinstated the policy, and President Trump did the same, reinstating the global rule just days after taking office in 2017. The move prevents billions in U.S. aid from going to nongovernmental organizations that also provide abortions or referrals for abortions with money from other sources.

Over the years, that policy has forced the off-and-on shuttering of family planning clinics in some of the neediest parts of the world and, at least one study shows, likely had an unintended consequence: actually increasing abortion rates. The abortion rate went up nearly 50 percent in 20 impacted African countries between 1994 and 2008, according to a 2011 study out of Stanford University published in the Bulletin of the World Health Organization. Specifically, the rate climbed in the years the policy was in place and particularly spiked in countries that were most impacted by the policy change.

"Our study found robust empirical patterns suggesting that the Mexico City Policy is associated with increases in abortion rates in sub-Saharan African countries," the authors note. "Although we are unable to draw definitive conclusions about the underlying cause of this increase ... if women consider abortion as a way to prevent unwanted births, then policies curtailing the activities of organizations that provide modern contraceptives may inadvertently lead to an increase in the abortion rate." ♦