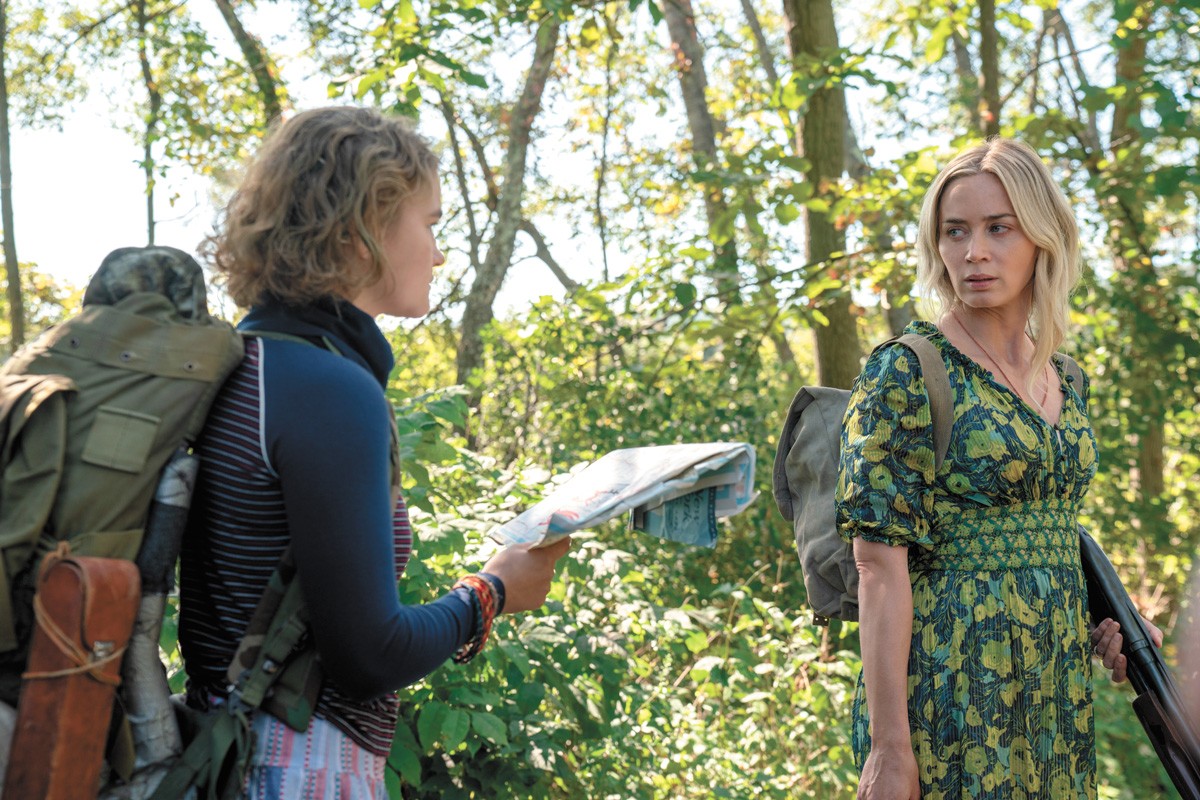 Emily Blunt keeps it to a dull roar in A Quiet Place Part II.

You've barely left home for more than a year, except maybe to pop to the store for essential supplies, because the outside world is rife with sudden onset danger. But now it's time to venture farther afield with newfound protection against the peril. Which isn't to say that you aren't still afraid, or that the risk has been anything like completely quashed...

I'm not sure there's a better film to welcome us back to big-screen mutliplexes — if you're ready for that again — than A Quiet Place Part II, which hits very differently now than it would have had it been released as originally planned, back in March of last year. We humans may not be getting slaughtered by vicious monsters with extraordinarily sensitive hearing who hunt by sound, but the apocalyptic predicament of the Abbott family resonates much more powerfully with us after our own year-plus of pandemic living. Now they, too, have to venture from the relative safety of their upstate New York farmhouse in search of, well, a new normal.

For these continuing travails of the Abbotts, returning writer and director John Krasinski has made a marvel of a sequel, smartly avoiding trying to recapture what made 2018's A Quiet Place so remarkable — because that hardly ever works anyway — in favor of expanding the horizons of this world in every way possible. (Spoilers for the first movie follow in a bit, but if you haven't seen it, this follow-up won't make a lot of sense anyway. This is not a standalone story but very much the next chapter in a bigger tale, with at least one more to come.) We see more of the world that is left beyond the Abbotts' refuge, learn a little more about the monsters, meet people who may or may not confirm some assumptions we made about this apocalypse based on the limited knowledge we gained from the first movie. And everything new we glean here is nothing more than the absolute barest bits we need to keep us hooked on wanting yet more.

Spoilers here: With the same brisk, crisp efficiency with which he told the previous chapter, Krasinski picks the action up in the immediate moment after that shocking ending, with dad Lee (Krasinki himself) dead, mom Evelyn (Emily Blunt) just having given birth, and the sound of a shotgun likely to bring monsters down on her, teen Regan (Millicent Simmonds) and tween Marcus (Noah Jupe). There is no room for rest: They have to leave, not least because their carefully constructed sanctuary has been destroyed.

And Krasinski allows us no rest, either. He ups the ante on himself as a masterful director of terror, crafting sequences of mounting suspense that intercut events happening in different places in a way that should feel forced and phony but simply don't. The first time he pulled that off, I was astonished. And then he did it again. It was almost as gratifying as the jump scare — the single, solitary one — that actually made me jump, which never happens to me while watching a (supposedly) scary movie.

I was truly, genuinely terrified watching this one.

Somehow, miraculously, Krasinski finds all the right notes to hit as he toys with our expectations, based not only on our experience of the previous film but what we bring with us from other science-fiction horror movies. After brilliantly holding the monsters in reserve for most of the first movie, he knows he can't do that again, because we've seen them and their appearance can no longer be a matter of tension or secrecy, but he finds other ways to surprise us with them. He has a keen eye for a gut-wrenching image of the human scale of enormous disaster, like one I'm certain was inspired by 9/11; it's not crass but poignant.

And after playing with quietude like he did in the first film, Krasinski goes in the opposite direction sometimes here: This sounds more like a typical horror movie — big sounds, lots of noise, even lots of dialogue — and yet the lingering need for silence gives all of it all the more impact. As a filmmaker, Krasinski remains as heedful of the effect of noise as his characters are, and yet this does not feel (or sound) like a carbon copy of the first movie. In any way at all. Instead, it is again a fresh, unique cinematic experience. ♦