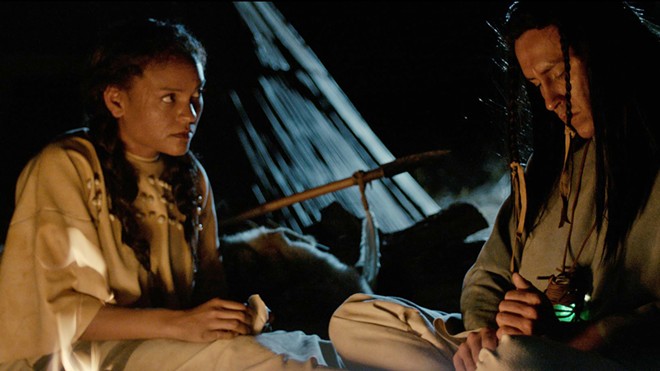 Actors exchange Salish dialogue in Strongest at the End of the World.

The fire crackles under the vast starry sky, keeping Quemtshena and Xwistu warm on this chilled autumn night. The pair huddle around the blaze and discuss what to name their unborn child in front of their tule mat tipi. The tension between the two is as visible as their warm breath through the cold air, crackling with an intensity that pops like the fire-engulfed tinder.

Then the director yells cut.

About an hour and a half north of Spokane on the Kalispel Indian Reservation, the second night of shooting has begun on the short film Strongest at the End of the World, a period piece/supernatural thriller in which the two lead actors speak entirely in Salish.

The brainchild of writer, director and cinematographer Ryan Abrahamson, a Spokane Tribe member, the project serves as a small but ambitious piece of artistic representation.

"I've never seen a Salish movie," says Abrahamson during our on-set visit, "so when we were rolling yesterday and they were speaking Salish in the hunting scene? That's f—-ing nuts.

"We've got them in [Pre-Colonial] period costume, speaking period Salish, in an actual region they existed in," he says. "It just feels like we're on the right path. All the local elders here and local leadership love this."

Authenticity was paramount for Abrahamson. The tipi in the aforementioned scene was crafted by Shawn Brigman, a member of the Spokane Tribe who works out of Spokane Public Library and Spokane Public School's communal space, The Hive. The tule mat tipi took eight hours just to assemble on-site for the shoot, which is a fraction of the time it takes to harvest the reeds and put together the mats in the first place.

"This is a really advanced Salish," says Abrahamson. "It's not just colors and numbers, which is Salish 1. They're on Salish 3, and they've never heard this stuff. Our guy Barry's been teaching it for several years, and he's like, 'These guys are great.' That said, even he recognizes Salish is f—-ing hard. It's not like studying Spanish. You don't know where the word stops and where it begins. Because the sounds are just wholly different."

Strongest at the End of the World falls under the umbrella of Counting Coup Films, Abrahamson's production company. Counting Coup's goal is to "preserve the past, share the future" in part by training aspiring young Native American filmmakers in various on-set roles. To date, the company has created a wide variety of shorts, PSAs, music videos, etc.

The stealth goal of Strongest is to try to push for more film incentives in Washington state, specifically ones directed at film shoots in Indian country. Washington notoriously does not have great incentives for film shooting — only $3.5 million annually. It's why so many shoots go to places that prioritize incentives that make productions financially feasible, such as Vancouver, British Columbia (which offers a 35 percent tax credit) and Georgia (which gave out $870 million in subsidies in 2019). Abrahamson thinks not taking advantage of the unique shooting locations that reservations provide is just foolish.

"There're like 29 [reservations] in Washington. All of them have dramatically different climates. They're all kind of like (popular filming location) New Zealand, because there's swaths of land that are undeveloped."

He's hoping Stronger can shake Olympia awake to the potential economic and social boon of Indian filmmaking in the state.

"Everyone wants to make movies," says Abrahamson. "They just want to be represented, right?" ♦

Halloween's horror slasher has cheated death countless times, whether we wanted it or not