A Sense of Détente

In only two months, the seemingly intractable battle between mayor and council has turned into an exuberant truce 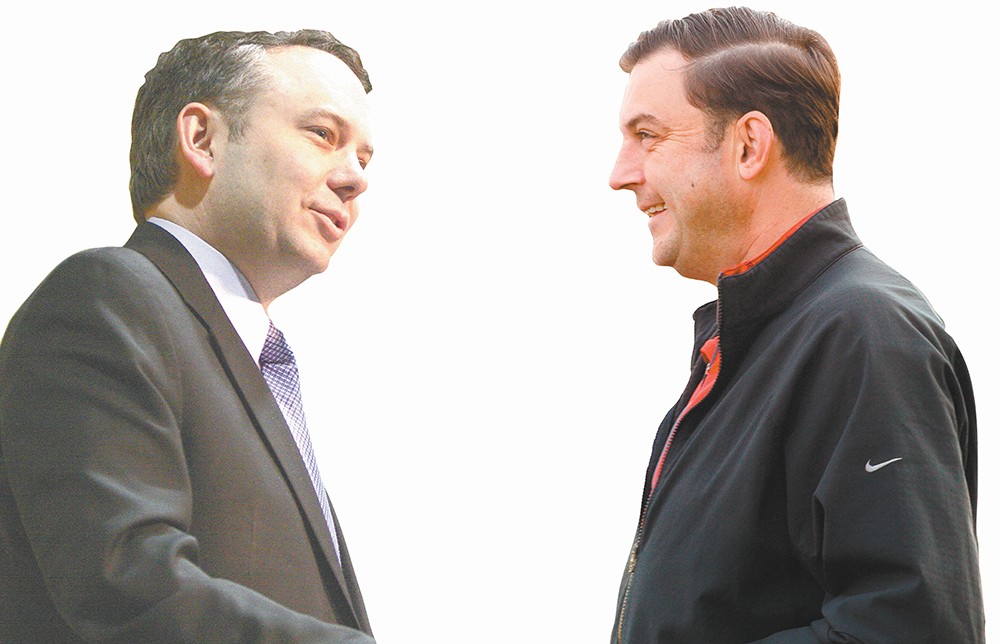 After fighting for months amid the police chief scandal, Mayor David Condon and City Council President Ben Stuckart have agreed to hit the "reset button" and focus on economic development.

A year ago, the last stop for victorious City Council President Ben Stuckart

on Election Night was the party celebrating the historic re-election of his occasional ideological opponent.

"The last thing I did on Election Night was to see the mayor and congratulate him," Stuckart says. He and Mayor David Condon talked that night about their shared vision for economic prosperity in Spokane.

Three weeks later, that alliance was blown to smithereens: Public records revealed that the mayor's administration had conspired to hide sexual harassment allegations against former police Chief Frank Straub from the public — and from the city council. For nine months, amid a contentious independent investigation, the two sides launched fiery salvos at each other.

Stuckart accused the mayor of being a "liar" and called his excuses "bullshit," while the mayor accused Stuckart of being driven by "political motivation" and of being willing to put "the citizens at risk" to serve his own agenda.

And that was before the investigator's report came out in late July, launching the explosive charge that the Condon administration had intentionally withheld the damning documents until after the election. Condon fervently denied the charges. City councilmembers called for resignations.

The lowest point came in August, when the mayor's city attorney pick, Laura McAloon, withdrew her name from consideration after a heated meeting with Stuckart.

She told the Inlander the meeting was "toxic." She said that Stuckart was a "bully" and that she was "flabbergasted by the animosity."

McAloon, mind you, was the one who intended to repair the broken communication between the mayor and the council. Back then, that goal looked hopeless to her.

But in the past two months, everything has changed: The city council and mayor's office have rapidly shed their mutual animosity — or at least set it aside — in an attempt to recapture the spirit of civic cooperation that had defined Condon's first term.

The turning point came on Sept. 13, when a Superior Court judge ruled that a recall attempt against Condon could not move forward.

Stuckart, who little more than a month earlier had demanded immediate resignations in the Condon administration, declared that it was time to move on.

"Now the entire city must turn the page, leave this ugly chapter in the past, and move forward," Stuckart said in a statement, specifically citing the need to "repair our damaged relationships."

He ran into Condon the next morning. They began talking in the hallway, and eventually moved to his office.

"It's an opportune time for us to hit the reset button on our entire relationship and keep moving," Stuckart recalls saying to Condon. He says that meant choosing to trust each other, despite their conflicts in the past.

"To me, that means really taking everything at face value and not questioning it," Stuckart says.

Their conversation, like the one at Condon's re-election party, focused on their common goal of boosting Spokane's economy.

"We need to go back to the lion's share of the first term, that was based on a lot of collaboration," Condon says, citing the widely praised way the mayor and the council came together to clean the river, fix the streets and rebuild parks. "To me, there was a big foundation to base this on."

He and the council began meeting to develop an economic development strategy. That, in turn, sparked a far broader conversation: For the first time in Condon's tenure, the mayor and the council would partner to create the same long-range plan.

"By early next year, we'll have a long-term strategic plan for the city that's agreed on by everybody," Stuckart says.

In the past two months, the mayor has swiftly sewn up other loose ends from the Straub scandal: He struck a deal with the National Organization for Women just hours before he was to be grilled before the ethics commission. The organization agreed to withdraw their ethics complaint accusing him of dishonesty, partly in exchange for including them on the task force updating the city's gender equity and sexual harassment policies.

On Monday, the council unanimously approved a $50,000 settlement to a public records lawsuit related to the Straub scandal, one that agreed to reform parts of the city's records policy and ethics code.

Councilwoman Lori Kinnear (left) worked to deescalate a conflict between the mayor and the council. Councilwoman Karen Stratton (right) has plenty of frustration with Condon, but she's been able to set them aside.

Neither deal required Condon to admit to any wrongdoing, but they've allowed both Condon's supporters and critics to turn their focus elsewhere. In his interview with the Inlander, Condon only mentions the police chief scandal obliquely, referring to it as "issues around personnel matters." But he says that bringing those issues to a close has made it far easier to communicate directly with city council members, on issues like hiring the new police chief.

In August, the mayor had outraged the city council by ditching a long, public process to unilaterally appoint Meidl, and initially refused to bring him before the council for confirmation.

Councilmembers Lori Kinnear and Breean Beggs scrambled to find a compromise, managing to avoid a showdown between the mayor and the council. The deal allowed both sides to save face: The council got a more thorough process that pitted Meidl against three other police chief candidates, while the mayor, ultimately, got his police chief pick overwhelmingly approved by the council.

"I've been very active and vocal about making sure that we were creating a different dynamic with the mayor's office," Kinnear says.

On the seventh floor of City Hall, less than 100 feet of hallway separates the mayor's and city council offices. But at times, the two offices operated like two different countries, with emissaries attempting to deliver communiqués between the two.

Tyler Whitney, a former fundraiser for Condon's re-election campaign, was hired in January as a policy advisor and to be a conduit between the mayor and the council. While Stuckart doesn't have anything bad to say about Whitney, he critiques the setup as unproductive.

"That doesn't really work," Stuckart says. "The mayor and the councilmembers need to be talking directly."

"I've talked to them on a more individual basis," Condon says. "And many of them appreciated that."

Chief Financial Officer Gavin Cooley describes recent meetings where the mayor's excitement to bring the city council into discussions has been obvious.

"The mayor will be hitting a good point in the conversation and will jump up and disappear," Cooley says. "And then the mayor and Ben Stuckart or a member of council will walk back in together."

At the end of September, Whitney left the city to return to his legal practice. While Condon plans to hire a replacement — he sees the policy advisor role as crucial for negotiating on the nitty-gritty aspects of proposed ordinances — he plans to continue his personal outreach to councilmembers.

"I guess what needed to happen for communication to improve, is they actually started communicating," says McAloon, who's kept an eye on City Hall since withdrawing as city attorney candidate. "That's what happened, it seems."

The relationship between the mayor and one councilmember, however, has remained strained.

Councilwoman Karen Stratton is the only councilmember who does not have monthly meetings with the mayor. She was the lone vote opposed to confirming Meidl as police chief, citing concerns about the process.

Her frustration with the mayor stretches back to before the Straub scandal. After Condon publicly endorsed her opponent during last year's election, she said in June that she struggled to forgive the mayor for what she saw as "a personal, public expression of no confidence."

Stratton has been a fervent critic of Condon's push for more mayoral-appointed positions, arguing that they've chipped away at the civil service provisions. This summer, she introduced three ordinances constraining the mayor's ability to make personnel changes without council approval.

Condon refused to sign the ordinances, saying he considered them void. The week before the recall hearing, Condon sent a letter directed at Stratton condemning her for "hampering the city's ability to be innovative and responsive to changing needs" with her "anti-innovation ordinances." He accused Stratton of attempting to "strip away essential executive power and hand it over to the city council." One of her ordinances, he argued, was "tantamount to wage theft."

While it concluded with an olive branch asking Stratton for collaboration, Stratton felt attacked.

"It kind of felt like a public spanking," she says.

Stratton's response came two weeks later. It was five pages, hammering home her frustrations and anger at the mayor. "Your administration has made very clear your disdain for Civil Service," she wrote. She accused him of hurting civil service employees in an attempt to "outsmart" the system to do it. She called the idea that the mayor could just "unilaterally ignore" ordinances he didn't like "both illogical and dangerous."

The mayor hasn't written back. But for Stratton, just the ability to say her piece — get it all out there — was liberating. It allowed her some sense of closure.

"I've just chosen to move forward and do what I can," Stratton says. "I'm good. I have no desire to live in the past. ... I'm not trying to pick fights or poke the bears."

She says that she and Councilman Mike Fagan met with Condon to discuss the police chief appointment, and that their meeting was positive and respectful.

"He's been nice. I've been nice," Stratton says. "I don't want to get in pissing matches every day."

More contentious issues are on the horizon: Several councilmembers plan to pursue a ballot measure next year that would allow voters, instead of the mayor, to choose the city attorney — a proposal that Condon fervently opposes. But for now, the mayor and the council — including Stratton — have forged something approaching peace.

Asked if he'd be willing to start having monthly meetings with Stratton, Condon responds with eagerness.