If this film has a point, it's this: "Life is pointless, and so is this movie." 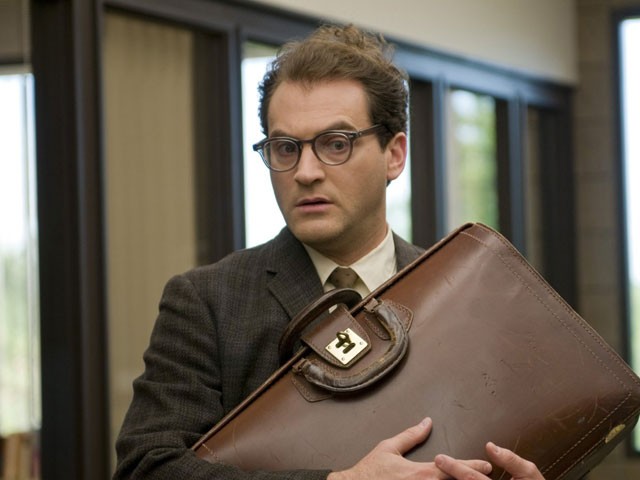 A Serious Man will be a serious challenge to many film-goers, even those who want more from movies than exploding robots. Aside from a cameo by Adam Arkin, it has no stars. It’s more philosophical than most moviegoers will have patience for. And if the film has a point, it’s this: “Life is pointless, and so is this movie. And if God exists, he’s a bastard who is either ignoring us or actively f------ with us.”

For this, we go to the movies? Well, yeah. If you like films that provoke thought and stimulate emotion, you’ll thrill to A Serious Man. In places, it’s droll but melancholy. In others, it’s hilarious yet heartbreaking. In all, it’s ironic but sincere. We could even call it “post-snark,” as if directors Ethan and Joel Coen (Burn After Reading, No Country for Old Men) are using the posture of sarcasm and satire to let us know they’re not kidding. They’ve got serious questions, serious concerns, and they’d like some goddamn answers from the management. (What they suspect, however, is that there are no answers and probably no management.)

The Coens express their angst through their new Job, physics professor Larry Gopnik, who, in 1967 Minneapolis, finds himself under metaphysical attack on all sides. His wife wants a divorce. His tenure at the university is threatened. His teenaged kids ignore him. Everywhere he turns, Larry is besieged — and New York theater actor Michael Stuhlbarg is so utterly sympathetic as Larry, so yearning for relief, that you can’t help but ache for him.

The film is semi-autobiographical, distilling the ethos and atmosphere of the Coens’ Midwestern childhoods in intellectual Jewish fashion. And it seems to me that right here, we may have the key to 2.6 h understanding the Coens’ entire oeuvre.

I’ve never studied the Torah, and I’ve never been terrorized by a rabbi who tells useless parables in the mistaken belief that this would make my troubles disappear. But at least now I get Barton Fink. I think…. (Rated R)