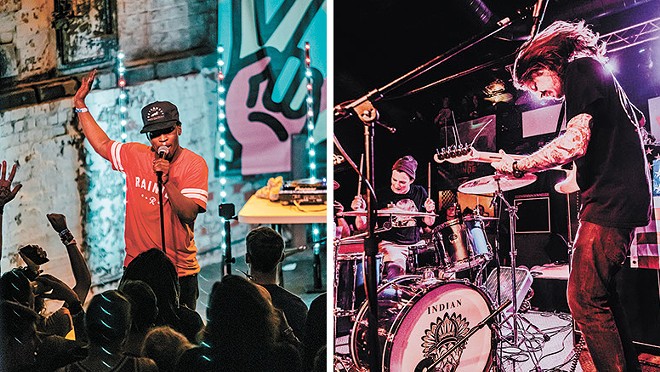 Heading into the holiday season, there's a lot going on in pretty much everyone's lives, and that extends to the live music beat. So we've made a list — and yes, we've checked it twice — of shows and benefits happening in the next week that we don't think you should miss.

The Spokane scene has lately been producing some high profile team-ups between the rap world and the rock world. Most recently, hip-hop performer and producer T.S the Solution teamed up on a track with the electro-pop project Water Monster, and long-running hip-hop fusion collective Flying Spiders has often appeared alongside the Spokane Symphony. This time around, it's hip-hop artist Jango and the drums-and-guitar rock duo Indian Goat, two of the biggest names within the local music scene, that will be sharing the stage. The hard-rock band has been selling out local venues for a couple years now and completed a short tour in the summer, and Jango has similarly been expanding his reach beyond the Inland Northwest with out-of-town collabs and viral videos. Both acts will be taking over the Lucky You Lounge this Friday night, alongside local blues-rock favorites Fat Lady and Seattle-based hip-hop act New Track City, for a show that'll bring two different fan bases together and might inspire some unexpected mashups. 1801 W. Sunset Blvd., 21+, $7-$10, luckyyoulounge.com

When you go to a winery to hear live music, you're probably expecting to sip a nice merlot while an artist plucks gentle pop tunes on an acoustic guitar. But Bridge Press Cellars, 39 W. Pacific Ave., is changing that. The corner storefront is apparently the first winery in the state to obtain a liquor license, and the "grand opening" for their full bar is happening this Friday at 5 pm. You can order a craft cocktail right alongside the wine you'd normally enjoy, and take in live music from the Kenny James Miller Band. Meghan Sullivan and Howard Davis perform Saturday night. See bridgepresscellars.com for details.

ROCKIN' IN THE FREE WORLD

There's nothing better than something that's free, particularly when it's also something that you'd happily pay for anyway. Case in point: This ongoing series hosted by local hard rockers Elephant Gun Riot, called Free for All, which is a perfect excuse to get out of the house and rock out. This weekend's lineup at the Big Dipper features the Riot alongside Still We Rise, Civiliance and Sovereign Citizen and the Non Prophets. Take that pocketful of cash you'd normally spend on a cover charge and put it toward a couple of tasty beverages instead. 171 S. Washington St., all ages, free, bigdipperevents.com.

GET WHAT YOU GIVE

'Tis the season for giving, and the folks at the Pin are hoping to put some extra presents under local Christmas trees. To benefit those in need, the all-ages venue is opening on Wednesday night, Dec. 11, and staging live music for a good cause. If you show up, bring a gift that will go to a local child via the local foster facilities Sally's House and Evangeline's House. The musical lineup, which leans toward hip-hop and EDM, includes CCB Krew and Dustfuzzz, and raffles will be held for those who donate. And if you don't have time to wrap a gift, cash will do. Doors open at 7 pm. 412 W. Sprague Ave., all ages, free, thepinspokane.com. ♦