A tale of two local sommeliers. 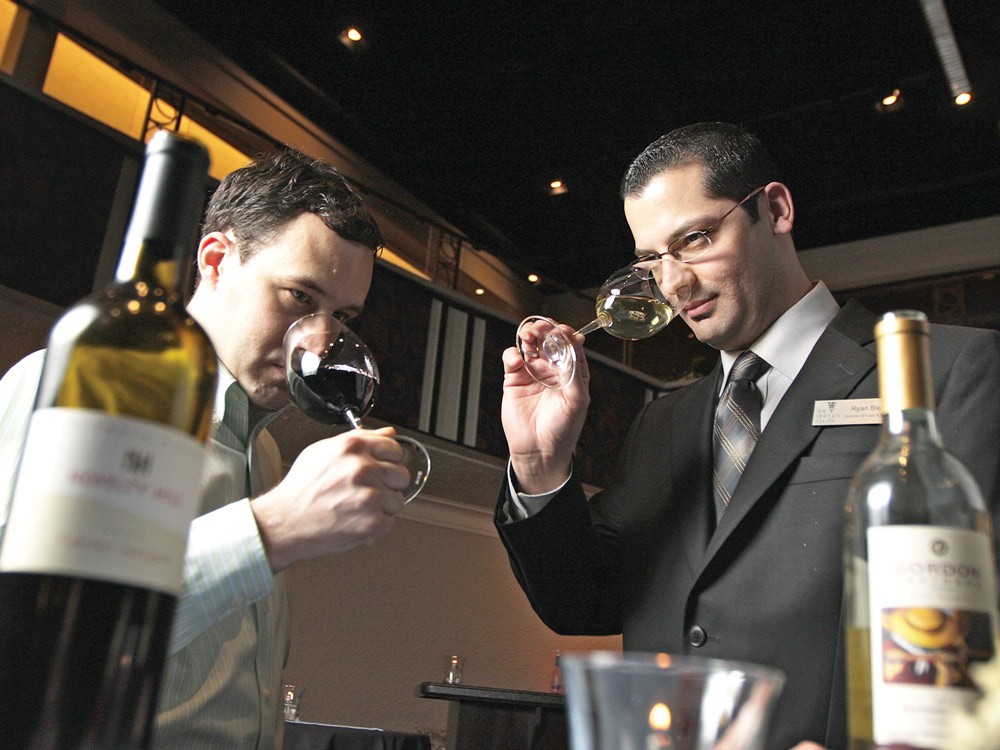 At the end, it was just Ryan Biesen and the six glasses. Two days and 12 hours into the Advanced Sommelier Certificate test — the second-highest honor in American wine — after multiple-choice tests and essay questions and etiquette checks, drills on how to suggest and cork and sell and present and pour wine, Biesen stood in a conference room at a hotel in Olympia.

Across the room from him, passing silent judgment, was the panel.

“There is always a panel,” Biesen says. He doesn’t remember the color of the carpet that day, or the drapes. He just remembers the panel — comprised of master sommeliers and educators — and his own nagging thoughts.

“It was one of those mornings you hope you put on enough deodorant and you’ve had enough coffee,” he says.

The panel would judge Biesen’s ability to identify characteristics of six different wines. “Characteristics,” here, doesn’t mean “red” or “white.” It means a wine’s clarity, its brightness, its concentration, its age, its fruit flavors, its earthiness, tannin, alcohol content, acidity, complexity and finish. And from all that, the panel would expect Biesen to tell them what grape or grapes the wine was made from, what climate it came from, the country and region the grapes grew in, and the year it was bottled, as well as a statement of the wine’s quality.

Biesen would have to identify all six in 25 minutes. Thankfully, Biesen loves wine. He has loved wine since before he was legally allowed to love wine. He works in hospitality and is currently the food and beverage manager at the Lincoln Center. Taking this test — which only requires a 60 percent score to pass and which most people still fail — was, in one way, a nice line in his resume. It was also, though, an expression of that love.

Thankfully, too, from as far back as he can remember, Biesen, now 32, has been a worker. He graduated from West Valley High School in 1997 — a year early. By 2001, at age 21, he had his doctorate in art history, taking 30 credits a semester, every semester.

The advanced sommelier exam, though, was a test on an entirely different level, Biesen says. “It was my [doctoral] thesis on crack.”

When Biesen was finished, the panel excused him and led another postulant in. Biesen had spent two full days — and several months before that — sleeping, eating, drinking and breathing wine. (It would be another week before he heard he’d passed.)

The first time Jeremy Wood heard someone describe a wine as having hints of gooseberry, he went out and found some gooseberries, so that he could know the flavor the person was talking about.

He says he has friends get down on their hands and knees and put fistfuls of dirt to their nose. He hasn’t gone that far, but he’s gotten close.

Wood, 31, is assistant restaurant manager at the Davenport Hotels. He says wine has taught him about the diversity of the world. Knowing and being able to identify the differences between a cabernet sauvignon from Walla Walla and one from the Yakima Valley means you can identify the difference in the ground in these places, and their climate.

Wood and Biesen are the only certified sommeliers in Eastern Washington. (Eric Cook, across the state line at Coeur d’Alene Resort, is also certified.) They’re young, in sommelier years. Biesen doesn’t think that’s a coincidence. They were growing up at a time when wineries were starting to pop up all over America and wine culture was taking off its cufflinks and monocle.

Wood says that, when he was growing up, “wine was just something you had with dinner.” He says people who do what he does love it. It’s not for money — especially around here, where there are no pure sommelier jobs — but for the sort of passion that breeds obsession. And so Wood spends much of his free time in pursuit of new wines and new food flavors with which to describe it.

A couple times in our talk, he seemed to geek out on the immensity of it all. “You can get leather, soil, tobacco,” he said at one point, “fresh fruits, dried fruits, fresh cut grass.”

And how does he know what fresh cut grass tastes like? Wood smiles and shakes his head. “I have definitely put cut grass in my mouth.”

Both Jeremy Wood and Ryan Biesen say wine should be fun. It’s alcohol. It’s meant for revelry. You should enjoy it the way you should enjoy life. When Biesen stared into the gaping maw of academia — “the awful monotony” — he stepped back and picked food and wine.

In a strange way, wine is like sports. The better you are, the more fun you can have. The caveat there, Biesen says, is not getting freaked out by the immensity of it all or selfconscious of any residual hauteur.

“Don’t overthink it,” he says, “don’t get stressed about it, don’t be intimidated by it. Be 100 percent present.”

Gone are the days of wine’s white-gloved inaccessibility. Outside the Court of Master Sommeliers (and the International Wine Guild, a similar organization), no one is keeping score.

Wood says he goes to work every day excited, because basically every day someone — a rep, a fellow sommelier, a random customer — teaches him something new.

“When you taste a good old-world wine, you can taste the love with which it was made,” Wood says. It only seems right to him that we would all drink it with such love.