A spoiler-laden breakdown of Star Wars: The Last Jedi and modern fan expectations

Love it? Hate it? Either way, Star Wars: The Last Jedi has inspired heated discussion amongst its fans.

"Let the past die.

If any line encapsulates the spirit of both Star Wars: The Last Jedi and the fan fallout the film has received, it's this line that Kylo Ren delivers when trying to woo Rey to join him. In many ways, writer-director Rian Johnson plays with the expectations viewers have when watching a Star Wars movie and swings a lethal lightsaber that strikes down some of the franchise's lore.

A lot of people love it, but a whole lot of people on the internet hate it with enough power to destroy a planet. It killed their pasts.

In the social media age, everyone can have their voice heard, but only extreme takes rise above the overflooded din of online white noise. It's a climate where everything must be framed as the best or worst, with little room for nuance, so a new Star Wars movie — one of the last true bastions of monoculture — has little chance to escape that wrath cycle.

In a fictional galaxy long defined by the polarity of light and dark, The Last Jedi exposes and explores the messy middle ground. Johnson adds gray to the palette. Luke Skywalker picks apart everything about the Jedi order's legacy as a beacon of light and hope, precisely tearing down the myth and his own "laser-sword" legend because of all the darkness raised under the noses of arrogant Jedi (himself included).

One's opinion of The Last Jedi probably hinges largely on how they view the treatment of Luke Skywalker. Detractors will scoff at his flippant humor, and take grave issue with him dying by fading into the Force instead of in the course of a direct, physical battle. But any anger in that direction ignores the wonderful character arc crafted for Luke over the course of the movie.

While the men grow as characters, it's the strong women who do the leading. Most everything that goes wrong in The Last Jedi comes via terrible decisions by men with ego-driven hero complexes who are actively ignoring correct female advice or orders. So much could be solved easily if Poe, Finn and Kylo respectively listened to Leia/Vice Admiral Holdo, Rose and Rey. The movie practically screams the much needed lesson, "Trust women!"

On a fan appreciation level, the Force connection scenes between Rey and Kylo are brilliantly crafted, and everything that happens in the finale on the red salt planet of Crait is scripted near flawlessly. There are other less weighty highlights, from the opening starfighter battle, to the porgs being cute and unobtrusive.

Perhaps it's unfair, but the biggest way The Last Jedi disappoints comes from the mysteries set up by The Force Awakens. Kylo revealing that Rey's parents were nobodies works on a "special people can come from anywhere" thematic level, but it crosses into the realm of cheating the audience by invalidating established information. (In fairness, Kylo could've been lying.) There's also no real information about Supreme Leader Snoke, a character whose non-existent lore needed fleshing out for his power and demise to be meaningful.

The Last Jedi certainly has flaws ripe for nitpicking: Leia's first real use of the Force being the witchy "flight" back to the bridge, Admiral Ackbar's death being an afterthought, the mirror in Ahch-To's pit (which still seems pointless after three viewings), and the sudden romantic pushes in the last scene that felt unearned.

But even my own nitpicks illustrate the problem with expectations, don't they?

Fan fiction reigns in the age of the internet, and if people invest their fandom energy into a franchise, they want their post-production idea for rewrites to be heard. It's hard to top one's own imagination.

Love it or hate it, we should all be happy that The Last Jedi and the larger Star Wars universe still sparks that fiery imaginative passion. ♦

Star Wars: The Last Jedi is not showing in any theaters in the area. 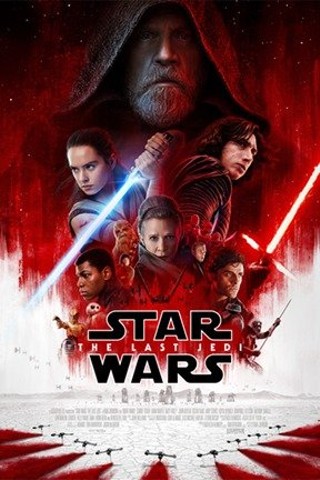