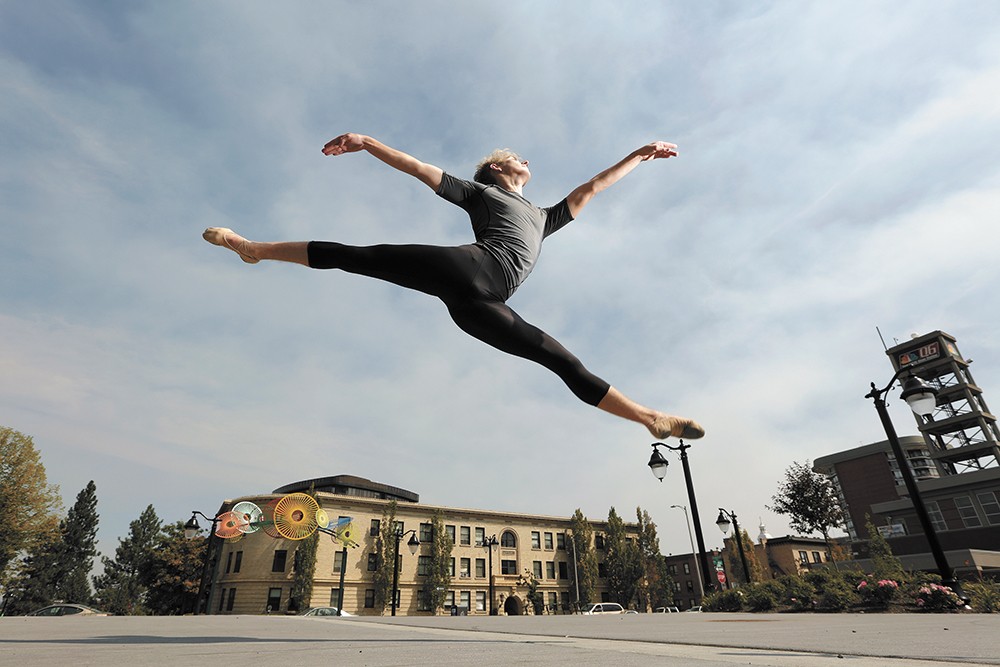 Harris Kahler was reluctantly put into his first ballet class at age 11. By the time he was 12, he knew he wanted to make a career out of it.

Now 17, he's off to Michigan to attend Interlochen Art Academy to further his ballet career and learn from some of the finest teachers in the country.

Finding the right dance partner made all the difference. At first, Harris hated ballet. It wasn't until he was paired with his now long-time partner Ryan Ham that he really began to love it.

"We had our first recital piece, and it was just walking around and bowing, but it was really fun because she was super nice to me and I totally loved it," Harris says.

After that first recital Harris was approached by his partner's mom, Jill Ham, asking if he wanted to start dancing competitively. Sure, he responded, as long as he could still find time to ski. They found a way for Harris to juggle both his old and new passions. He's been dancing ever since, putting in about 30 to 35 hours of practice weekly.

On top of being a dancer, Harris also goes to the Community School, where he juggles classes and a job in addition to his after-school ballet training.

His day begins at 5:30 am when he catches a city bus to school, where he works in the cafeteria. After a typical school day he goes to Spokane Ballet Studio until 5 or 6 pm. His mom then picks him up and takes him over to his other studio, Artistry in Motion, around 7 or 8 pm to train another hour or two.

For anyone, let alone a teenager, the schedule is intense, and Harris takes it all on with enthusiasm every day.

"He goes to the Community School, it's all project-based and they have been incredibly supportive and easy to work with," says Erika Kahler, Harris' mom. "Last year he had to leave school an hour early a couple days a week to make it to extra ballet classes and they were amazing to him and working with his schedule to make it happen."

"It's not just textbooks, I would hate that. School has taught us to find personal relevance in everything, so that's what keeps me in school," Harris says. "Knowing that the money I earn and getting up early and working will help me later on for dance. I love doing it and I want to make a career out of it."

When school isn't in session, Harris spends his summers traveling around the United States for summer intensives, which are a time to focus solely on dance and spend more hours practicing. They also serve as a chance for dancers to be with other people who have the same drive and passion for ballet. Intensives give dancers the chance to perform in front of different ballet companies and experience different ballet methods over the span of a few weeks.

He has worked at the International Ballet Academy, Oregon Ballet Theatre, Ballet Arizona, Pacific Northwest Ballet and Pittsburgh Ballet Theatre. Through all of these different experiences, Harris has developed friendships and created memories that will last a lifetime.

He tells a story about leading the dancers in his dorm out to a grassy hill after a rainstorm. They ended up playing in the mud and sliding down the hill.

"It's really fun to have all this crazy training, which is intense and hours of work, but we also get to have tons of fun going crazy and just being kids," Harris says. "It's such a great experience all around."

These intensives also allow Harris to have more experience with other male dancers, because in Spokane finding a male dancer as a mentor or peer is incredibly difficult.

"It's a totally different energy in the room when it's all guys because with dance there's a lot less tension between the guys than there is with the girls," Harris says. "There is a lot less competition for guys just 'cause there's not a lot of us. So, when we all get in a room, we have a great time and jump around and it's craziness."

This was one of the leading factors in deciding to pursue dance full time and transfer into a year-long program like Interlochen's.

"I realized pretty quick that I'd probably have to send him away for training," Erika says. "Most young dancers have to do that unless they live in New York City or Seattle or something like that."

The Kahlers saved money for a year for Harris to attend Interlochen. While he's there he'll be able to keep up with typical high school academics and dance all afternoon. Harris and his mom hope Interlochen will be a good next step to reaching his ultimate goal of being a professional dancer.

He wants to be able to take his passion and share it with everyone, especially boys in Spokane who want to dance.

"I think when I'm done dancing, I want to come back to Spokane and work on the programs here to make them better and more equipped, especially for guys," Harris says. "So, say someone like me is stuck and they don't have what they need here, this way, they wouldn't have to leave."

Harris already has a strong passion and deep understanding of ballet, but he hopes that at Interlochen he can further develop both as a dancer and a person.

"I love evoking emotions and making people feel something just by moving to music," Harris says. "It's so simple in principle because it's just beats and sounds. But somehow that mixed with moving and jumping brings out strong emotions in people." ♦

The journey of Vytal Movement Dance is illustrated in its upcoming performance, "Sanctuary"