Kay O'Rourke has spent well over 35 years creating: paintings and sculptures both, collaborations with other artists, an eclectic collection of artwork from countless Northwest artists, and elaborately cooked meals featuring ingredients from her expansive garden.

Her home and studio are both an extension of, and central to, O'Rourke the artist, the storyteller.

"It's always a bit of a wild place," says O'Rourke, who could as easily be referring to her narrative artwork as the semi-forested, rocky acreage where she lives east of the Little Spokane River. 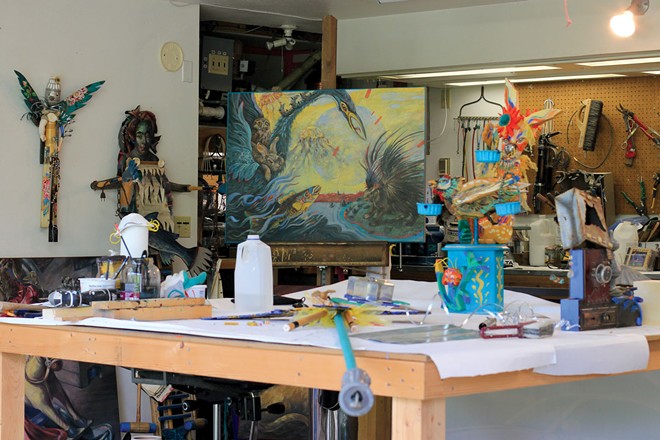 When she moved to the house five years ago, she reminded herself that she did not need or want stairs or a steep driveway. She got both. But working around the property keeps her healthy and active, says the 76-year-old O'Rourke. 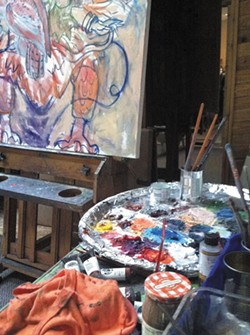 "At first I might whine, but it's worth it," she says, while seated in one of several garden areas around her 50-something-year-old home. She is wearing peach Converse sneakers, jeans, a cotton top, and an oversize ring that matches both.

She also thought she could live without a garden, explains O'Rourke, who grew up on her family's Walla Walla farm. She missed having fresh herbs, however, and has begun reclaiming the wildness of her yard, one piece at a time, incorporating art into every space. She expanded an existing seating area that had enough sun to sustain potted tomato plants, recently adding mosaic artwork by friend Melissa Cole.

She filled a below-ground retaining wall area with edible plants and commissioned artist Daniel Lopez to paint a mural on it. Near the base of the driveway, she installed a fenced, U-shaped garden that deer, turkeys and the other critters that live nearby have yet to get into, though the birds are bent on trying.

"You can grow food anywhere," says O'Rourke, the oldest of seven children, with parents who valued gardening, food, art, education and family. It just depends on the amount of work you want to do, she adds. 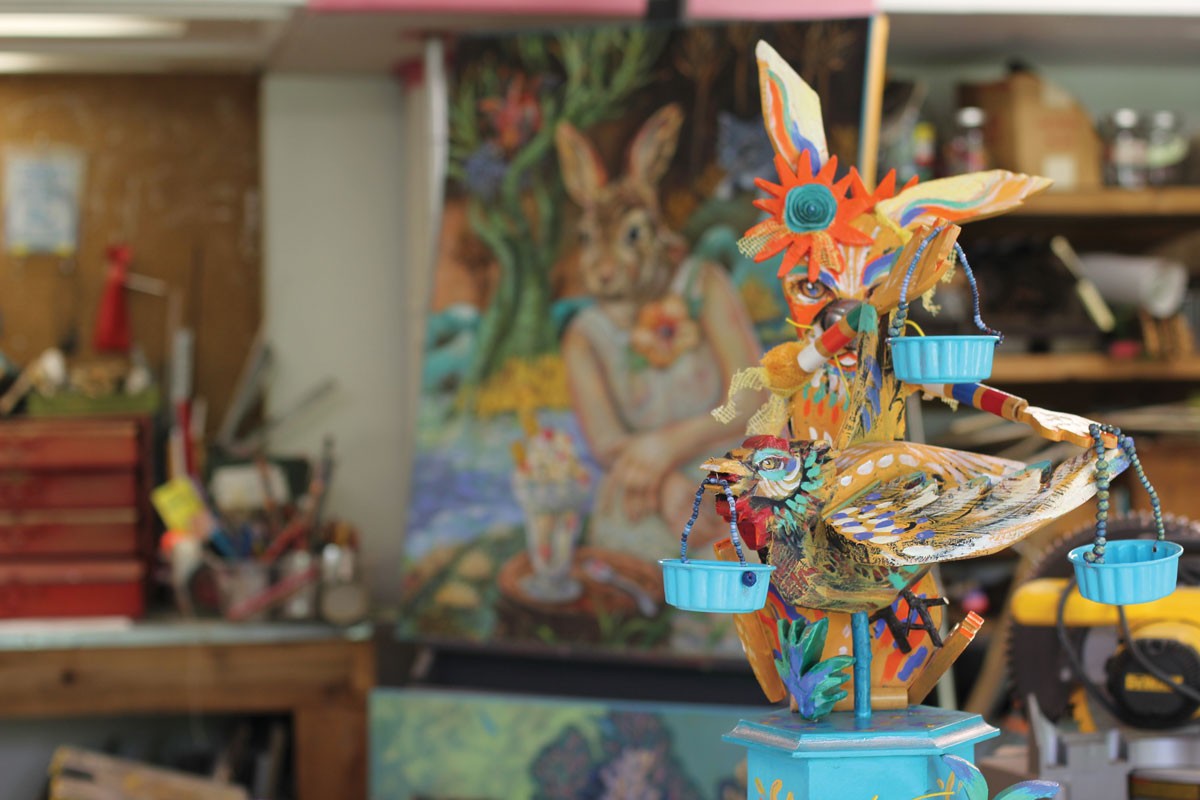 And work she does. A lot.

In the morning, when the weather is amenable, O'Rourke opens the garage door to what otherwise serves as a frame and prep shop for her prolific canvases stacked six or seven deep in places, many of them 3-feet or larger. Some are propped on easels, instantly recognizable as an O'Rourke: energetic brushwork, a mostly primary color palette tending towards variations of two distinct blues, and her trademark whimsy. 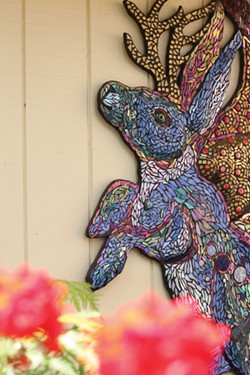 Diners at River Park Square's food court, for example, would recognize her River Dance, one of numerous commissions and collections throughout the Northwest. Elsewhere, her work can be seen at Sunset Elementary School, at St. Mark's Lutheran Church, at Spokane City Hall, and at Spark Central where 30 paintings commissioned by developer Jim Frank narrate the Spokane River's history until Expo '74.

Her exhibition list is mostly Spokane-based, too: the former Lorinda Knight Gallery, Object Space, the MAC, Chase Gallery — or nearby, such as the Art Spirit Gallery and Emerge in Coeur d'Alene, and the Yellowstone Art Museum in Montana. She also had a few out-of-state exhibitions and has done some unusual collaborations, including one where she tricked out a car for charity, Kay O'Rourke-style.

Her garage-level studio is filled with the makings for assemblages, 3D manifestations of many of her 2D narratives. An old yard tool, colorful netting, a thick wood cutout in the shape of a bird that's been painted and holds a turquoise tin in its beak. Several of these pieces populate O'Rourke's garden and yard, too.

Later in the day she'll head upstairs to paint in her studio there. 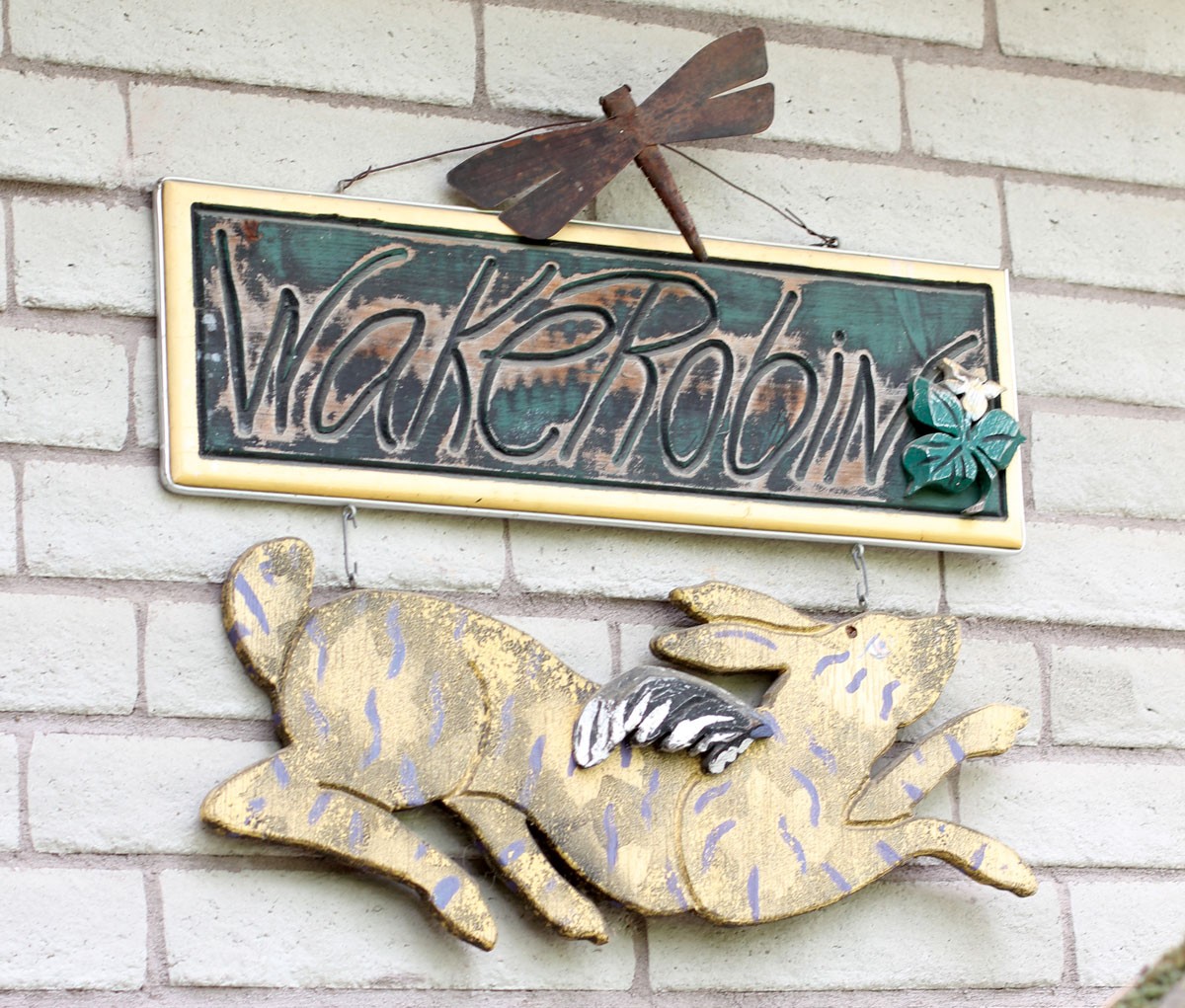 She'll walk past a sign that features the word "WakeRobin" It's a literal nod to the wake-robin trillium flower from where she used to live, and also incorporates a leaping bunny with wings, a fitting embodiment of her boundless energy and creative spirit.