A tribute to Deb Abrahamson, a prominent Spokane activist, who died Jan. 1 at age 65 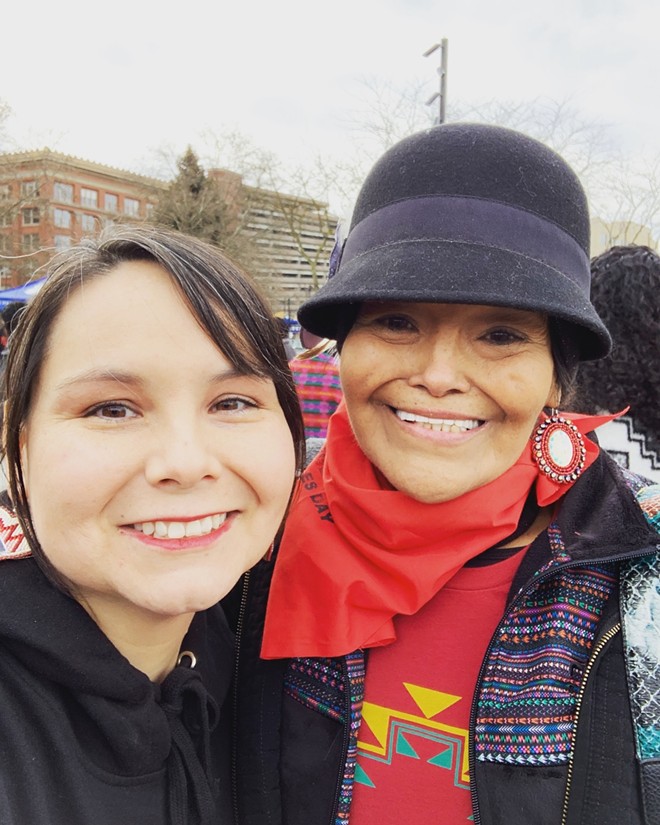 Deb Abrahamson, right, and Tara Ramos in Spokane at the march in solidarity with the Indigenous Peoples March on Washington, D.C., on Jan. 19, 2019.

My name is Tara Ramos. My Inupiaq name is Qallaq. I am of the Atoruk family from Kiana, Alaska. I write to you from the ancestral lands of the Sp’q’n’i? in what is now known as Spokane. I ask that my elders and cultural leaders from the local tribes and the urban Indigenous people forgive me any break of protocol or tribal practices.

Deb Abrahamson is walking with the stars after she passed on New Year’s dawn in the town that often forgets its first people. The cancer that so many get from the immoral and unethical mining practices finally succeeded in its destruction of a warrior of the highest caliber. It was a long-fought war, one in which Deb was the victor in many of the skirmishes that ravaged through her body until the very end.

Those of us who knew her also know she was the most humble leader, so a recitation of all her achievements would be tedious to her. So I won’t bother to list all she did in her activist portfolio, but you should know that Deb Abrahamson lived and died fighting for clean water, air, and land on and off the Spokane reservation. She also stood for Missing and Murdered Indigenous People and Black Lives Matter. Her activism was rooted in her identity, and that meant she stood up for any injustice to our people, our land, our water, our air for all of us.

The thing about her embrace was that it made you feel good, but even more, it made you want to do good and do better.

If you had the honor of meeting Deb, you know the quality of human she was. And as I try to write about her, I can’t help but feel completely inadequate as a writer for I am humbled by the power of her spirit. She was someone who wore her humanity on her sleeve, unafraid to face derision or hate.

Her eyes saw all. They took in your spirit and lovingly returned it to you soothed and comforted. That was just her eyes. When she hugged you, it was a hug with the power to heal and you felt infinitely better even if you thought you were good. As you embraced her, her arms were like being hugged by Mother Earth herself; not an exaggeration I promise you. There are countless people on an online memorial saying similar things.

The thing about her embrace was that it made you feel good, but even more, it made you want to do good and do better. She held within her the standard for humanity and goodness and Indigenous love. Since I was a little girl, she inspired me to fight the destruction of our Earth. She was a walking call to action, and few could resist her siren.

And as she walks on, it’s my duty and my honor to write to you about how she taught so many of us to be good humans so that she can continue to inspire all us. So I want you to think about the power of this woman inspiring so many to stand up for what they believe in; fighting the good fight. Imagine standing next to her as she rises to meet the environmental and social justice issues that we face today. For she is with us, even now. Her spirit lives in me and in you, if you choose, for she was the most selfless human I know.

In Indigenous culture, auntie means so much more than just a paternal or fraternal aunt. Auntie means any woman older than you who takes on the role of loving you, looking out for you, guiding you, sharing knowledge, etc. It is both an honor to be able to call someone an auntie and to be called auntie by more than biological nieces and nephews. Deb Abrahamson was my auntie. I have no doubt that if COVID-19 wasn’t a thing, her memorial service would be packed by the hundreds, maybe into the thousands for she was auntie to so many.

So as the family lays their mother, their grandmother, their sister to rest, I can’t help but feel a deep sense of loss for them, for myself, for Spokane, for we have lost one of the most important leaders of our time. I can only hope that through these words that she inspires you to stand up for our environment, stand for Black Lives Matter, stand for Missing and Murdered Indigenous People, and stand for women’s rights. For Deb Abrahamson will be standing with you.  ♦

Tara Ramos is Inupiaq, a mother to three beautiful children and a champion of justice and equity for all people in our community. She is currently a consultant for Diversity, Equity, Inclusion and is an occasional writer.