A Week in MONTH 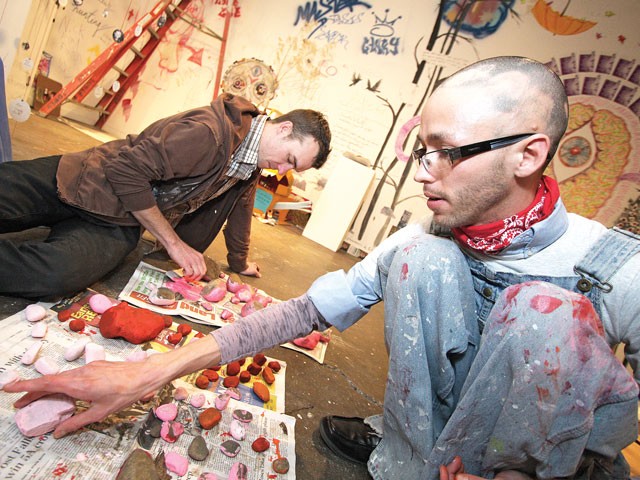 “When you eat bacon you are eating bunny.” In one person’s handwriting.

“Preferring kosher.” In yet a third.

For two weeks, a different artist had taken residence each day for 24 hours, living and working and doing whatever they felt like. Marcia Dukes was next.

I asked Dukes what her plan was. She set down the ironing board and giant Furby and scanned the tops of the walls (which are more than 15 feet tall). “I’m going to paint a tightrope,” she said, not mentioning how the Furby would be incorporated or what the ironing board was for.

At a coffee shop earlier in the day, Naaman Cordova-Muenzberg, one of the organizers, explained the impetus behind MONTH. “We had this idea to get a bunch of different people — community organizers, painters, musicians, hula-hoopers… just doing what they do.”
Cordova-Muenzberg conceived of the idea with Jillian Foster, his partner in Black Rabbit Magic, as a way to “highlight art that builds community.” He classifies MONTH as social sculpture, an idea based on the art and theories of Joseph Beuys, who believed that everyone has a hand in building our public aesthetics — whether they consider themselves artists or not. Beuys, working mostly from the ’60s until his death in 1986, also believed that the most effective social revolutions are artistic ones.

For Cordova-Muenzberg and Foster, MONTH’s local revolution is two-fold, a step away from the commodification of art and a step toward a mindfulness about the objects we create (whether they’re sculptures or toasters). What began as a bunch of people doing individual things would become “this growing, cohesive mass.”

In the week The Inlander kept tabs, that’s just what happened. Kind of.

Like that time Tiffany Patterson spent her residence painting the walls with birch trees while a coterie of friends built a papier-maché forest in the middle of the room with show posters and sewing patterns. (“My goal is to make it feel like one piece,” she said).

Or the time some random guy walked by and asked Marcia Dukes if he could paint alongside her. The man turned out to be a Christian tagger, scrawling graffiti — crucifixes and repentance warnings — up and down the walls.

What became clear, during the week, was that what ended up on the wall, to a degree, was only the byproduct of the bigger experiment. In Cordova-Muenzberg’s words, “I don’t think the end product is as important as the community it has created within that particular space for that month.”

Indeed, the art that’s on everyone’s lips all week has left no traces on the walls or ceiling, though there may be some residual avian droppings. Bruce Hormann, of Object Space (1818 E. Sprague), spent his 24 hours on a performance cycle called “Happiness and Torture,” which included hours and hours of Hormann strapped to a table — the victim of a simulated water-boarding — while ducks and geese roamed freely around the space.

“It’s horrifying … and then you see the ducks. And …” Cordova-Muenzberg says, pausing. “You want to laugh. You don’t know if it’s funny. You don’t know what to feel.” Most importantly, “you only experience it once.”

The semi-spontaneous creation, evolution and (this Saturday) destruction of an entire artistic community is valuable for the art of people like Foster, who want to understand how we live and work in the world.

On our final visit, Foster sat on the floor making a stuffed animal out of burlap, bovine jaw bones and the skull of some sort of canine, while Lisa Whiteman, wearing a bird costume made of cardboard and feathers, scrambled eggs on a skillet. Everyone was dressed in childlike garb and had placed pastel-colored stickers on their cheeks.

This was near the end of Foster’s time in the space. She said she spent most of it “curating,” putting things in a kind of order that felt cohesive and aesthetically pleasing. It’s what always happens when artists take their creative chaos and organize it into a gallery show. It’s something we do instinctively, she feels, though the motives aren’t always clear. It felt jarring and invasive in MONTH because the act of creation and the show displaying it are one and the same.

In the middle of Foster’s rumination, the William Tell Overture came on the record player and everyone stopped to dance around, galloping like they were riding horses.

Which displays in a way better than words can that the opposite of Foster’s observation is true as well. The creative chaos of exuberant art can and usually will destroy all attempts to constrain it with words, or inside galleries, or by any means at all.

MONTH will exist at Kolva Sullivan Gallery, 115 S. Adams St., until Saturday, March 27, at roughly 9 pm. Free. There will be an artist in residence at all times. From 5-9 pm that day, the space will host a closing party that could very well last into the night and may include some fort-building. Call 496-4796.