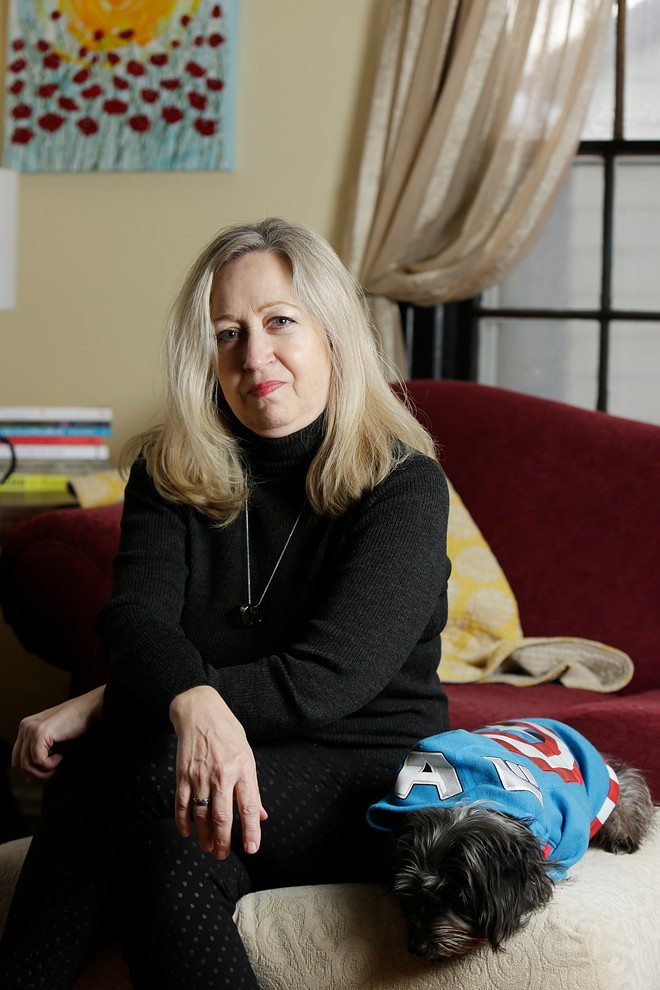 When Lori Decicio went to bed on Nov. 9, 2020, the last thing she heard was her son laughing at the TV in the living room.

The next morning, she went into the kitchen to make coffee. As she walked by the living room, she saw her son, Nathan Snow, slumped over on the couch, lifeless.

She screamed and she wailed, as if, in her words, she'd been "skinned alive" in that moment. A friend rushed over to attempt CPR. Paramedics then arrived and pronounced Nate dead. Police knocked on the door, and her dog bit one of the officers, and Decicio allowed herself to think briefly that Nate would find that hilarious.

It took weeks before she knew how Nate was killed. His phone showed that he had bought oxycontin the night he died — a surprise to Decicio. Then she remembered her friend, whose son died of fentanyl.

"And I thought, could it be fentanyl?" Decicio says. "And it was."

The Spokane County Medical Examiner told Decicio that her son took a pill with enough fentanyl to kill six people.

As the scourge of fentanyl continues to invade the Pacific Northwest, these tragic, sudden losses are becoming more common, leaving loved ones struggling to comprehend the unforgiving power of an opioid far more potent than heroin.

More than a year later, Decicio still struggles to grasp how one simple mistake — buying an oxy pill that was actually fentanyl — took her son away so quickly: One day, Nathan Snow was a restaurant cook eager for a few days off work. The next, he was a casualty of the growing fentanyl crisis.

"Nate made that phone call. I hate that. I hate that he did that. He was just an average guy, in the grind of the restaurant world, and he ordered oxycontin," Decicio says. "He definitely didn't want to die. He didn't order death that night."

In the months before he died, Nate had moved in with Decicio temporarily. He was a cook at a national chain restaurant. But COVID had made his income unsteady, so he gave up his apartment temporarily.

"He asked me if he could stay with me for a while until he got on his feet again," she recalls. "I said, 'Absolutely.'"

As she grieves today, those days feel like a gift, one that was cruelly taken away before Decicio could cherish it. In those months, it was as if a new dynamic was blossoming — no longer just mother and son, but two adults who enjoyed each other's company. They laughed a lot. They bickered over the dishes. They had deep conversations on the deck with their dog.

"It just brought me so much joy to hang out with him," she says. "It was kind of rare quality time, and I loved it. We both knew it was temporary."

Nate grew up in Spokane, graduating from Lewis and Clark High School in 2005. Decicio says he was never going to have a conventional job. He didn't go to college. But he loved to cook.

His first job was at Frank's Diner, where he worked for five years. Later, he worked in Sun Valley, where Decicio brags that he made friends with famous actors like Woody Harrelson and Jamie Lee Curtis before coming back to Spokane.

In November, Nate had four days off work. He looked forward to the break, calling himself "vacation Nate," Decicio says. He and his mom were planning a big seafood feast the next day. They talked about when they'd get up and go to the grocery store — Nate preferred it to be later — and Decicio went to bed. That was the last conversation they ever had.

There was a text on his phone from that night, presumably moments before his death, sent by a coworker from the restaurant where Nate worked (Decicio has asked that the Inlander not name the restaurant). Decicio provided the Inlander with screenshots of the texts.

"Pullin up," the coworker wrote, just after midnight.

She had the pills that would kill Nate.

Since that day, Decicio has tried to make sense of her son's death. First, she sought justice. She feels the people responsible for delivering fentanyl to her son should be held accountable, she says. Fentanyl often comes in the form of a blue "M-30" pill that's made to look exactly like oxycodone, an opioid that's far less potent than fentanyl. That's what Nate thought he was getting, Decicio says.

Spokane Police investigated and have made no arrests so far, though Cpl. Nick Briggs, public information officer, says the case remains an open investigation and detectives have been in contact with the U.S. Drug Enforcement Administration and local prosecutors.

Fentanyl has made its way into Spokane largely because of Mexican drug cartels. In 2020, Nate was one of 28 people who died of a drug overdose involving fentanyl — more than a 250 percent increase from the year before, according to the medical examiner's office. And in 2021, preliminary data from the state health department indicates Spokane fentanyl deaths already surpassed the previous year's total within the first six months.

Unable to find justice for her son's death, Decicio has turned to the restaurant industry, asking for restaurant managers to do something if they know employees are exchanging drugs with one another.

Nate, his mother stresses, was not a drug addict. But she knows the reality of recreational drug use in the restaurant industry. Restaurant workers may be at the most risk for illicit drug use compared to workers in other industries, with nearly 20 percent reporting recent drug use, according to the federal Substance Abuse and Mental Health Services Administration. And that becomes much more dangerous with fentanyl around.

"I'm putting a plea out for other restaurant managers to care. Now that fentanyl is in the picture, recreational drug use can be deadly," she says.

David Blaine, chef and owner of the former Central Food, agrees that restaurants can be more aware of employee mental health and substance abuse issues. Some factors that may contribute to those issues are baked into the industry, such as long, late hours and cash tips.

"It's kind of a recipe for disaster in that you stuff their pockets with cash — it's a cash-dominated industry — and then they get off work at 11 at night, make drinks, hang out with friends. There's just a lot of opportunity with that structure to develop bad habits," Blaine says.

Beyond eliminating cash tips, however, Blaine says there should be room for compassion and support in the restaurant industry. Coworkers should support one another and be mindful of when someone is struggling.

Decicio hopes that her son's death may at least inspire restaurant managers to talk to the crew about the dangers of drug use and fentanyl, adding that there are resources to help like I Got Your Back, which works to destigmatize mental health issues in the hospitality industry, and Big Table, which aims to help struggling restaurant workers.

"I would say to a manager, 'Be a leader. Be willing to have that hard conversation based in reality. Like, you're my crew, fentanyl is killing people,'" Decicio says. "So let's talk about it."

Maybe, Decicio thinks, these cultural changes can prevent someone else from going through the grief she's gone through.

It's all part of her goal to find some sort of silver lining in her son's death. She's even taken a grief educator certification course, hoping to help people enduring grief both professionally and privately. She had to become a student of grief to move forward, she says.

"I always said Nate was my greatest teacher," she says. "And what I think is very cool coming out the other side of this is that he still is."

As she tells the Inlander about all that she's doing in memory of her son, moments they shared together replay in her mind. She describes the moments of happiness he brought her in between her own moments of sadness. Each time, it seems to strengthen her resolve to make a difference in any way she can.

"I'm all about making meaning, which is why I'm sitting here," Decicio says. "I'm creating meaning." ♦

Beware what might be in your cannabis — and your news