Gerrymandering. Is there anything it can't do?

It can create political dynasties or end them. It can transform red to blue and blue to red. It can put an ally in a place where they can't be beaten; it can cage an enemy in a place they can't possibly win.

And it can draw some really goofy maps that look like weird animals.


The moment you mention gerrymandering, a politics nerd will appear — seemingly out of nowhere — and start regaling you with tales of etymology.

They'll tell you at length, whether you want to hear it or not, how Massachusetts Gov. Elbridge Gerry — who went on to become a vice president, if you haven't heard — drew way back in 1812 a skewed district in Boston that his foes mocked as resembling a "salamander."


"Look at the 3rd Legislative District and look at where [Democratic Rep. Marcus] Riccelli lives," French said. "And if you don't think that looks like the broken leg of a cat, trying to make sure he's in that district? That's what I'm talking about. Because he lives up on Five Mile."

Back in 2017, Riccelli, with a bipartisan group of other legislators, passed a bill mandating that Spokane County had to move from three county commissioners to five. And crucially, instead of a system where candidates competed in the general election county-wide, they'd all be elected by district.

And nobody fought harder against the change than French. Riccelli lives in a red precinct on Five Mile Praire, but French lives in a blue precinct in Eagle Ridge in Latah Valley in southwest Spokane. French's current county commissioner district is the most liberal.

But French scoffed at those who argued that his opposition to the change was purely self-interested.


"The assumption is that, you know, it's going to impact me, we don't know that because the districting committee has even been formed yet," he said last year. "You take the 3rd Legislative District out of my county commissioner district, and I'm fat, dumb and happy. This actually benefits me more than that it does anybody else."

But today, the redistricting committee has been formed. Composed of two Democrats and two Republicans, each of them have designed their own maps for consideration. The boundaries they've drawn will have consequences for incumbents like French and potential commissioner candidates like Riccelli and also could result in radically different politicians controlling the direction of the county.

The job of the committee was to divide up communities into populations of similar size, and they had to try to keep together communities of interest — "people in a specific geographic area who share social and economic interests." Whenever practical, the mapmakers had to stick to existing voter precincts. And finally, they weren't supposed to design maps that used population data to "favor or disfavor" any racial group or political party.

But, what, exactly does it mean for a map to favor or disfavor one political party or another? Spokane is a solidly red county. It’s been more than a decade since a Democrat held a county commissioner seat. French beat Robbi Anthony by 13 points in 2018. County Commissioner Josh Kerns beat Councilwoman Candace Mumm by over 8 points in 2016.


Still, let's settle on a basic principle: A fair map would typically give you three Republican commissioners and two Democrats — and maybe an outside shot for the Democrats to take a third in a great year.

So the Inlander used a record request to snag the mapping data that the committee was using, and built an approximation of each of the four committee members’ proposed maps using the existing county voter precincts. Then we fed the data from the 2020 presidential race into them, and created two different ways to look at each proposed redistricting designer: One method looks at how Trump-friendly or Biden-friendly each proposed district was in last year's election. The more red the district, the stronger it went for Trump, while the deeper blue districts had huge victories for Joe Biden. It also shows you where potential commissioner candidates are living, giving you a sense of whether they would stand a chance of winning if they decide to run.

The second method highlights the politics of individual precincts, showing how the shape of different district designs can create radically different results. It also shows how the proposed borders can split up similar cities from each other.

Daniel Walters data visualization
Even though Map A would only net Democrats one seat in most years, it's still better for them than the status quo. Democrats haven't won a commissioner seat in over a decade.
Cartographer: Robin Ball, retired co-owner of Sharp Shooting Indoor Range & Gun Shop (Republican)

Let’s start with the reddest map.

Gerrymandering works by "cracking and packing." First, you pack a small number of districts to the brim with the other guy's voters, the sort of districts where the other team wins by 20 or 30 points. Then you crack the remaining districts, spreading out your voters, ensuring they win those districts by a narrower, but still comfortable margin, say, 6-10 percentage points.

And this first map gives a great object lesson on how that works: One that draws one central Spokane district so deep blue — which Biden won by 27 points — that Republicans have enough remaining to hold all four other districts.

Democrats Marcus Riccelli and Candace Mumm, for example, are trapped in a district that went for Trump by 12 points.

Still, District 5, which includes Cheney and part of the South Hill, looks to be more competitive, and this map does a great job at keeping similar small cities together: Spokane Valley and Liberty Lake hang out in one district, while Airway Heights and Cheney are paired up in another.

For now, the committee has shelved this map, and is focusing on debating the merits of the other three.

District 2 looks like: The head of a mighty llama, spitting out the Spokane River. 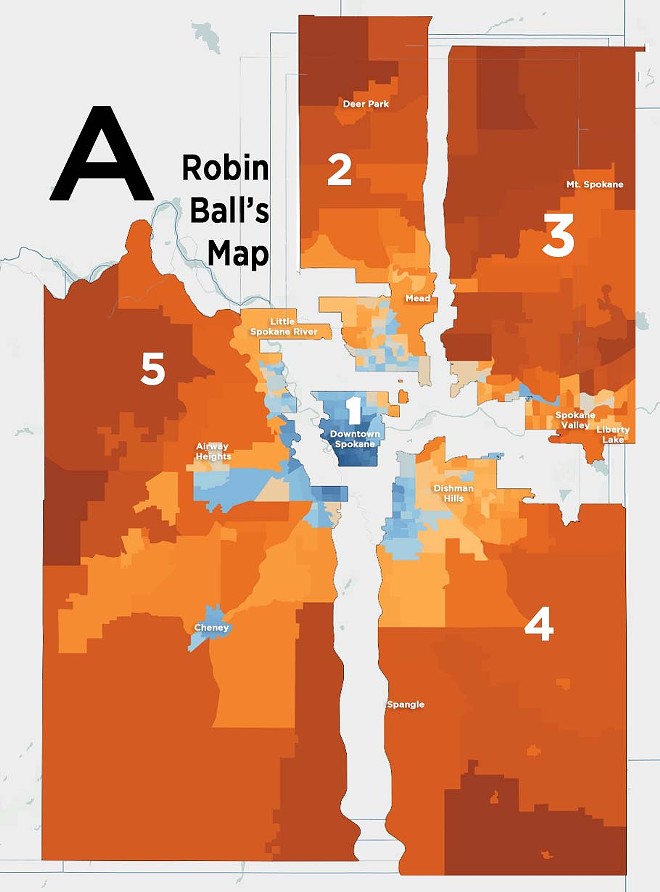 Daniel Walters data visualization
Map A does well at keeping most similar smaller cities in the same district, though it strips out the outer edges of the city of Spokane.

Daniel Walters data visualization
Depending on which election you look at, this district is either the most competitive or least competitive maps of any proposed.
Cartographer: Natasha Hill, local business and family law attorney (Democrat)

Hill’s map uses a similar strategy as Ball's but for opposite ends: She carves out two rural districts that went for Trump by more than 20 points, then she splits downtown Spokane into thirds, creating three solid Biden-heavy districts.

Not only that but her District 3, which stretches from Cheney to Millwood, puts Al French — the sitting county commissioner who fought the hardest against the move to five commissioners — in a district that went for Biden by around 12 percent.

It’s only Hill’s decision to cut a precinct in two that prevents County Commissioner Mary Kuney from being stuck in the same situation, halting the blue district’s border mere blocks away from Kuney’s Dishman Hills home.

District 4, meanwhile, is a sprawling district that includes the west and the south of Spokane County. Millwood, Liberty Lake, and Spokane Valley are split between three different districts. So are Medical Lake, Airway Heights, and Cheney.

This is one reason why which election you look at matters. If you look at Trump's comparatively narrow loss to Biden, not a single race on this map is actually competitive. But if you look at Al French's most recent victory against Anthony as your metric, then a 13-point victory suddenly becomes three too-close-to-call barn burners.

Facing a relative political unknown, Republicans would lose District 2 by 2 percentage points, and French would be within a point of losing his home district. And against someone living in District 3 with more name recognition, like Councilwoman Lori Kinnear, he'd be in serious trouble.

On the other hand, if this is a district where Republicans are expected to win countywide by 8 to 13 points every year, should there really be three competitive districts in a five-commissioner county?

District 2 looks like: A Welsh Corgi clad in the winged robes of an angel.

McClatchey’s is the map that hews entirely to the existing voter precincts, meaning it’s easier to calculate exactly what the political outcome would be: Two very strong Trump districts, two solid Biden districts — and one Trump-leaning toss-up district.

McClatchey's map is even more ruthless toward French than Hill's map. Biden won District 3 by 18 points, and even Anthony beat French by nearly 5 points. Incidentally, McClatchey's longtime colleague Ben Stuckart is also living in the district.

Give him this though: He didn't include his wife, Lisa Brown, in the most competitive district. While Trump still lost District 4 by 8 points last year, French narrowly won it in 2018.

Still, that means that if Brown — or, for that matter, Riccelli — wants to run for county commissioner in 2022, the Republican opponent is in for a hell of a fight.

As far as keeping communities of interest together, McClatchey's map breaks up the Spokane Valley, Millwood, Liberty Lake trio and separates Cheney from Medical Lake and Airway Heights.

District 2 looks like: Abraham Lincoln chilling in a jacuzzi. 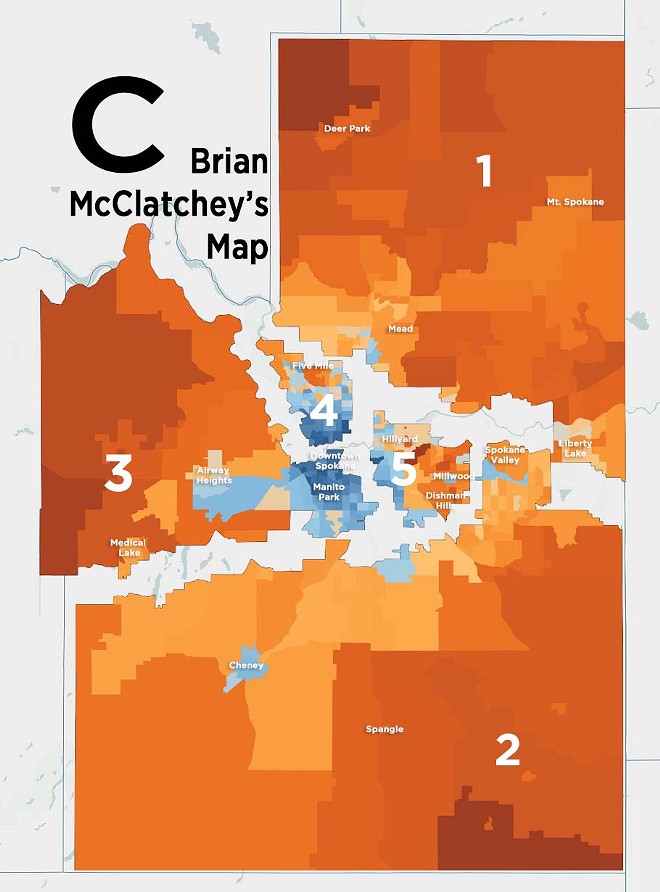 Daniel Walters data visualization
McDevitt's map prevents a rematch between Rep. Rob Chase and Commissioner Mary Kuney — but Chase ally Matt Shea would still have to defeat Kuney to get a seat on the commission.

McDevitt's map, meanwhile, was particularly bad about sticking to existing voting precincts, so it's best not to try to make claims down to the exact decimal point.

A decent year for Republicans and McDevitt’s map could produce a 4-1 Republican commissioner board. By contrast, it would take a truly spectacular year for Democrats — enough to beat French in a Trump +9 district — to have a majority Democratic board using McDevitt’s design.

Living in a district that went for Biden by 4 or 5 points, Riccelli and Candace Mumm would have decent a shot at becoming county commissioner, but it wouldn't exactly be a cakewalk. They'd have to fight for it. The far easier path would be for Ben Stuckart and Lisa Brown. Even in the 2018 commissioner race, Republicans lost that district by 4 points.


District 2 looks like: A bouffant hairdo that, when combined with District 1, is the spitting image of Jay Leno as a prancing goat.

Daniel Walters data visualization
Don't get too weirded out about the "tail" sticking out from District 1 — it's nothing suspicious. It's the location of Felt's Field, and the district simply follows the boundaries of the Spokane River and the borders of the city of Spokane. The old Lewis and Clark school district boundaries looked similar.


The committee will need to settle on a map a majority of the members can live with by Oct. 23. If they can't, it's up to the state's own redistricting committee to take a crack at it. In the meantime, you'll have a chance to weigh in at a public hearing tonight at the Moran Prairie Public Library from 5:30-7:30 pm. Or, if you'd prefer, here's a Zoom link. Use the passcode "518970."