Achy Feet Get a Workout 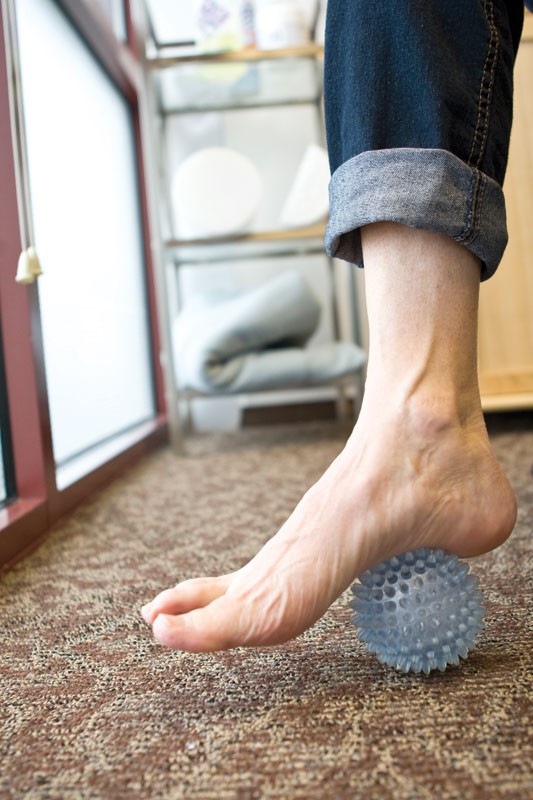 Stephen Schlange
When Vi Hunter hurt her foot, she found out its a common injury. One therapy method has Hunter use a spikey doggy ball to get back on her feet.

Vi Hunter had an achy foot. During the 5k Camp Sekani Trail run, she recalls how she developed arch pain. “I remember exactly when it happened. I was coming down a steep trail and I felt the bottom of my foot strain, up by my heel. I told my son and he looked on the Internet for how to treat it and suggested I use a frozen water bottle and roll my foot back and forth over it.”

She followed the advice for a week or two, but things didn’t get much better. She was even told it might take a year for her foot to get back to normal. “I don’t have a year that I want to give up waiting for this to get better. I am not that young anymore!” she says.

Hunter had a common condition called plantar fasciitis. The plantar fascia is a broad piece of tough connective tissue that runs from the heel to the front of the foot. When it gets inflamed, symptoms include pain on the inside of the heel and sometimes the arch, and pain especially first thing in the morning. “I could hardly walk on that foot when I first got out of bed,” Hunter says.

Gale Anderson, director of physical therapy at Therapeutic Associates-Mount Spokane Physical Therapy, agrees that the most common symptom among patients is heel pain upon getting out of bed, or similar situations in which the patient goes from rest to activity. Most of his patients experience pain for quite some time, and for many, it develops into a chronic condition. He often finds an earlier injury may be at fault.

“A common one is an ankle sprain years before that leads to a loss of motion at the ankle,” he says. “That causes the middle of the foot to bend repetitively, and that over time overloads the fascia.”

In other words, the foot takes on all the bending because the ankle is too tight. Anderson also says problems don’t always end at the ankle. A weak hip can cause the knee to drop into a “knockkneed” position, which can then cause the foot to collapse.

One of the big culprits in plantar fasciitis is worn-out shoes.

“If you have good biomechanics, then you can go to 500 miles (in one pair of shoes),” says Anderson. “As soon as I see biomechanical faults, such as fallen arches, I begin to subtract mileage from the 500 down to 400. … As soon as you start to feel something, you don’t get to ignore it, you need to get new shoes.”

As for Hunter, Anderson put her foot through rigorous treatment.

“I am not being nice to this. I am being vigorous with this,” he says. “If you ask people what bothers their fascia, they won’t name an activity. They tell you it bothers them most after they are inactive.”

So, to stress the fascia, Anderson had Hunter wear a splint at night to hold the fascia in a stretched position. During the day, she was to spend some time rolling her foot over a golf ball or a doggy ball with bumps on it. Instead of ice, he used heat and had her stretch, stretch, stretch. She stretched her calf, her toes, and the plantar fascia.

He also used a deep-heating device, massage and a technique that Hunter called “torture” while adding, “It really worked.” The technique is known as “tool-assisted deep soft tissue work.” Anderson used a tool to work the tissues, breaking up scarring and promoting healing.

After eight or nine visits over the course of a few weeks, Hunter was back to her interval running regimen. Anderson says while some people eventually overcome plantar fasciitis on their own, getting treatment sooner can dramatically speed recovery and get them back to their favorite activities.

Marie Cole is a physical therapist and instructor in the PT assistant program at Spokane Falls Community College.