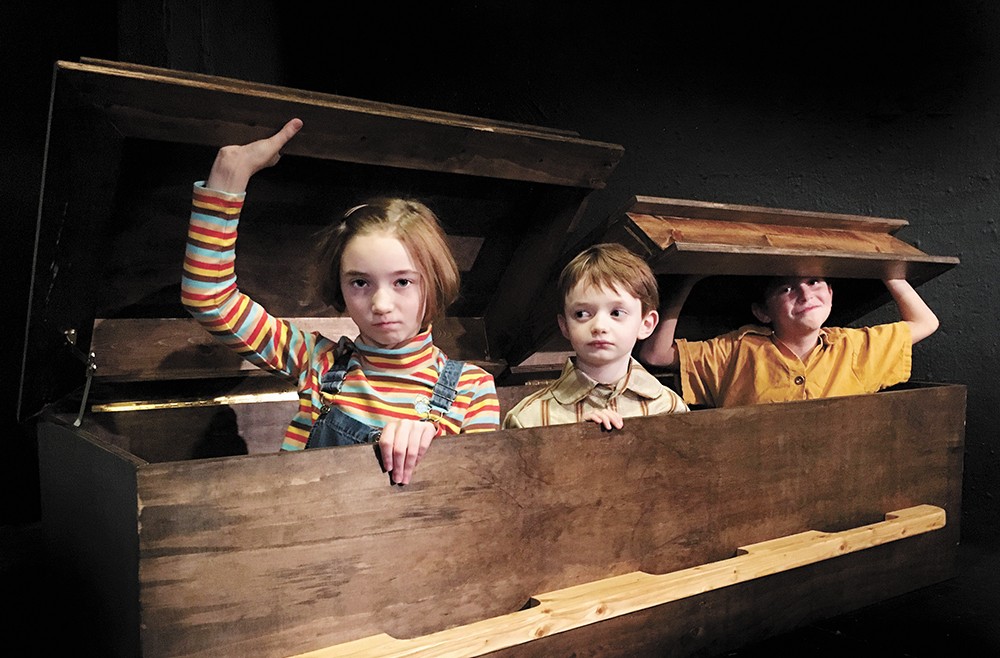 Published in 2006, Alison Bechdel's graphic memoir Fun Home chronicled her coming of age, her coming out as a lesbian and her coming to terms with the tumultuous relationship she had with her father. Until his death at the age of 44 from what was suspected to be suicide, he played an outsized role in her life — as a closeted gay man and a frustrated domestic tyrant whom Bechdel viewed as a kind of existential counterpoint.

Fun Home resonated with readers as a work of nuance, honesty and intelligence. Within just a few years, playwright Lisa Kron and composer Jeanine Tesori set about adapting it to the stage, which was no small task, given that Bechdel's illustrated tale is nonlinear and revisits the same episodes from different perspectives. By most metrics, they succeeded. Fun Home ended up garnering as much acclaim on the stage as it did on the page.

Lake City Playhouse in Coeur d'Alene is currently putting on a new production of Kron and Tesori's Fun Home. The fact that it marks the regional premiere of a recent Broadway hit is enough to make the show noteworthy, but director Brooke Wood views it as a larger milestone on account of its content as well as its unconventional approach to storytelling. Fun Home was the first Broadway musical to feature a lesbian protagonist. And, like the original graphic memoir, the live stage adaptation doesn't follow a tidy, sequential through-line.

"We had applied for this last year because I fell in love with the music," Wood says. "We knew that it would be a challenge on our stage in the sense that the original is done in the round, which made the time-hopping a little bit easier for people."

To translate Fun Home's fragmented chronology to Lake City's proscenium stage, Wood has the adult Alison root things in a particular timeframe by paralleling other characters' actions. In one scene, when she pulls an item out of a box of trinkets, her father Bruce picks up a similar object at the opposite end of the stage. They also share props. "So if she's thinking about, for instance, a tree that they had planted as a family, she actually puts the pot down for him to plant the tree in. The magic of lighting is going to be helpful as well."

As part of its narrative design, Fun Home uses what Wood describes as the "three Alisons." Each represents Bechdel at a different age and a different phase in her life. Ann Benson, a veteran mezzo-soprano of the Inland Northwest's operatic stage, is playing the eldest of the trio. She considers her own role to be the audience's "guide to this nonlinear story."

"I'm the 43-year-old Alison, and then there's a 19-year-old Alison and a 9-year-old Alison. On the one hand, maybe it takes a minute for audiences to get it. But once you get that, you don't need a screen card to come up and go, '20 Years Earlier.' And the Alison that I play, I do provide some narration and some transition. It's very clever because it doesn't feel pedantic. The show is very well written."

"The writer actually uses a lot of the same words for each of the three of us. It's really interesting, and I don't even know if you would pick up on it if you hadn't read the script 500 times like I have. But the way Alison talks is the same in all three eras. And we trade music a lot. Many of the things that I sing, one of the two of them will sing later in a different song and vice versa."

Dialogue and costuming aside, Wood has encouraged the three actresses to "sit down and come up with something that Alison does" — a physical gesture, for instance — that links her different selves.

But even though Fun Home is primarily Alison's story, it isn't exclusively about her. It's also an extended meditation on her father Bruce (played by Josh Koester): who he was behind his public persona, why he behaved the way he did and how those qualities profoundly affected those around him.

"There are a lot of moments between him and Alison as a young child," Wood says, "but it's more her realizing that he wasn't this monster as much as she may have remembered. He was a very tormented man because he was closeted and not allowed to be who he was supposed to be. The point of this show is not to capitalize on the fact that he had these demons. It's to talk about why he had these demons and why we can't go back."

Benson says the heartbreaking and heartwarming duets she shares with Koester toward the end of the show function as a turning point and a takeaway in Fun Home. They signal the kind of reconciliation and mutual understanding that's possible between those who once viewed themselves as adversaries.

"By the end of the show, she realizes that his life was incomplete. That pain crippled him in a way and had a ripple effect on his family. Along with making her life prickly and full of obstacles, he also made her very strong and very smart. And he gave her quite an eye for beauty," she says.

"They had a complicated and beautiful relationship, and that's ultimately what this show is about." ♦