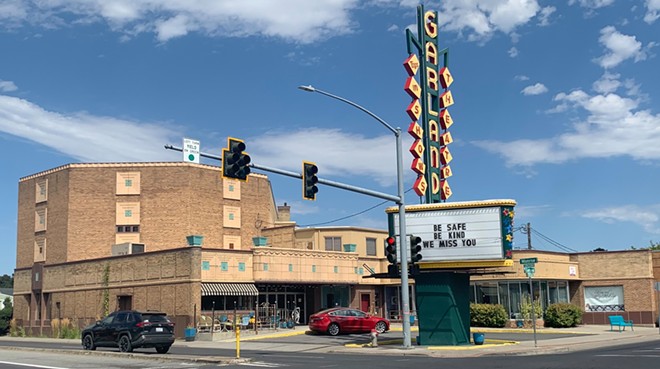 Courtesy Garland Theater
The historic cinema's marquee displayed this message for most of the past year and a half while closed.
When staff at the Garland Theater were updating the venue's iconic marquee at the corner of Garland and Monroe earlier this week, passing drivers enthusiastically reacted to the sight, a sure sign of its reopening.

"People were driving by and cheering and honking," says the theater's manager, Jasmine Barnes. "It hadn't been touched all this last year. I got a little teary eyed."

After being completely closed since March 2020, about 16 months, the 1945-built, single-screen discount movie theater is ready to welcome back patrons this Friday, July 23.

Showing are Disney's Raya and the Last Dragon, The Boss Baby: Family Business and The Conjuring: The Devil Made Me Do It. With summer releases back on big screens after a year of streaming or postponed releases, moviegoers can expect plenty more blockbusters on the way, like F9 The Fast Saga, A Quiet Place Part II and more.

"One month ago, if we'd reopened, there would have been no movies to show," Barnes says. "I think opening two months after AMC was best for us. Still, of course there's the issue with streaming, but there's something special about the in-person theater experience, so I'm not too concerned about that."


Tickets to all Garland shows remain $5, and that price hasn't changed for more than a decade, Barnes says.

Over the past few weeks, Barnes has been back at the helm of the theater — which is still owned by its longtime local operator Katherine Fritchie — hiring and training staff and getting things prepped up for Friday's reopening. Nine former Garland employees came back to their positions, while six other spots were quickly filled after receiving interest from about 50 applicants, Barnes says.

"We had no issue staffing back up, which was baffling," she notes. "We have a full bar and theater staff, and they're all super great. We're just opening back up the way we always had it, keeping it classic."

Thanks to the theater's receipt of a Paycheck Protection Program loan last summer, staff were able to deep clean, repair and repaint the building's 75-year-old interior. More recently, the Garland received a $459,000 grant through the Small Business Administration's Shuttered Venue Operator's Grant fund which helped cover losses from the past year.

While popcorn, concessions and a house-made snack food menu are returning to the theater lobby, craft cocktails, beer and wine are also back at the Garland's tiny connected bar Bon Bon.

Classic and rotating seasonal craft cocktails can be enjoyed before or after a show, and beer and wine — Barnes plans to improve the theater's wine list after a stint working at Nectar Wine & Beer in Kendall Yards while the theater was closed — are still allowed to be taken into a movie.

Bon Bon's popular happy hour is also back, although its featured craft cocktails are increasing a bit in price, from $5 to $7.

"I haven't seen a cocktail anywhere for under $8," Barnes says. "The thing about the theater is we want to be cheaper than competitors but we still want to provide a good, quality product."

Happy hour at Bon Bon is Monday through Thursday from 4-7 pm, Friday and Saturday from 10 pm to close, and all day Sunday. During the first few weeks of its reopening, the bar's hours will fluctuate until all staff are trained and settled.

For those who plan to head to the Garland during its big reopening weekend, Barnes reminds customers to be patient, as she expects it to be very busy. Plus, half the venue's staff are also new and still being trained.

"Someone said they were going to drive over from Seattle for opening weekend, and people have said they'll line up outside Bon Bon to be first to get a drink," Barnes says. "The main comment I've seen though, is 'Thank god, we thought you were going to be closed forever.' I think that was a big fear for a lot of people, that we weren't going to survive."