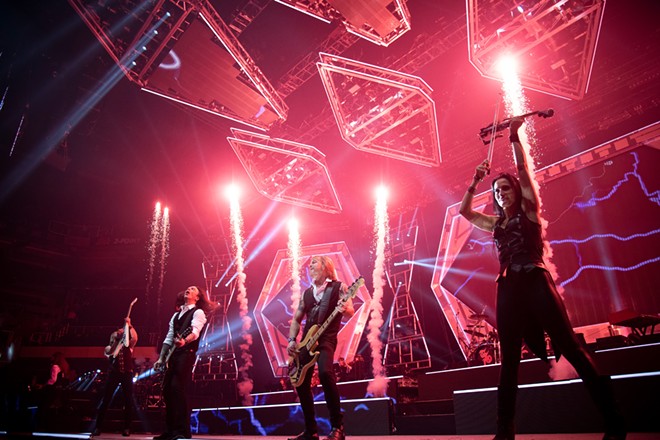 Who's ready to hear some fresh new Christmas songs? Just kidding! It's holiday concert season, sillies. Here are some opportunities to hear all the familiar faves.

Long before the kiddos are shredding wrapping paper on Christmas morning, Trans-Siberian Orchestra kicks off the holiday concert season with the group's typical arena rock holiday shredding. The tour serves as a celebration marking the 25th anniversary of the symphonic metal band's debut LP, Christmas Eve and Other Stories, which doubles as the act's best-selling album at over 3 million units sold. Trans-Siberian Orchestra also doesn't skimp on the eye-popping visuals, so there's sure to be plenty of reason to headbang beyond staying warm in the winter cold. Spokane Arena, $50-$90, 7:30 pm, spokanearena.com

Coeur d'Alene Symphony's principal horn player Casey Traver takes the spotlight in this collection of holiday works that doesn't dwell too much on the expected standards. Selections for the night, titled "Sounding the Horn: Illuminated Carols," include music from The Polar Express, Holst's "In the Bleak Midwinter" and Windel's "A Chanukah Overture." But fear not, traditionalists, there's also a holiday sing-a-long. Schuler Performing Arts Center, $20, 7:30 pm, cdasymphony.org

Part of the appeal of holiday music is how easy it is for everyone to grasp and sing, so the complexity and unpredictability of jazz always feels like giving the standards a fresh coat of paint. Some of the area's best jazz musicians unite for border-crossing concerts featuring big band renditions of the timeless tunes, accompaniment from vocalists Kate Skinner and Horace Alexander Young, and selections from Duke Ellington's take on Tchaikovsky's Nutcracker. Pullman High School, $25, 7:30 pm, wa-idsymphony.org


DEC. 7
MAT AND SAVANNA SHAW: THE JOY OF CHRISTMAS

While pandemic times were awful for 99 percent of musicians, they were actually a boon for the father-daughter vocal duo of Mat and Savanna Shaw. The Utah-based Mormon familial group became YouTube stars during the quarantine era based on "daddy daughter duets" of famous songs sung with an air of serious discipline. The group's studio album debut Picture This debuted at No. 1 on Billboard's Emerging Artists Chart, and they've followed it up recently with the release of The Joy of Christmas, which balances religious Christmas hymns with tunes like "Mr. Grinch." Expect a mix of the silly and the stoic when the pair's tour of the album arrives in Spokane. Knitting Factory, $28-$55, 8 pm, sp.knittingfactory.com

There's something about a chorus of voices echoing throughout a massive space that screams Christmastime. After a year away, Chorale Coeur d'Alene reinvigorates the holiday season with a program featuring chants, Finnish folk tunes, "Gloria," and — of course — a family carol sing-a-long. Trinity Lutheran Church, $30, Fri at 7 pm; Sat at 2 pm and 7 pm, choralecda.com

It's always a festive time when the Spokane Symphony busts out the standards for its annual holiday pops concert, giving those beloved faves a lush, room-filling sound. This year's special guest is the folk-pop duo the Sweeplings. The concert is something of a hometown spotlight for the Sweeplings' Cami Bradley, the Spokanite singer who was a 2013 finalist on America Got Talent. It should be a treat to see how the group's minimalist harmonizing blends with the symphonic power. Martin Woldson Theater at The Fox, $43-$92, Sat at 8 pm and Sun at 2 pm, spokanesymphony.org

A Spokane tradition, the Symphony always rings in each new year with this Beethoven epic masterwork. Well, almost every year. Because of 2020's pandemic postponement, this will be music director James Lowe's first time conducting at the year-end bash. Martin Woldson Theater at The Fox, $18-$62, 7:30 pm, spokanesymphony.org ♦