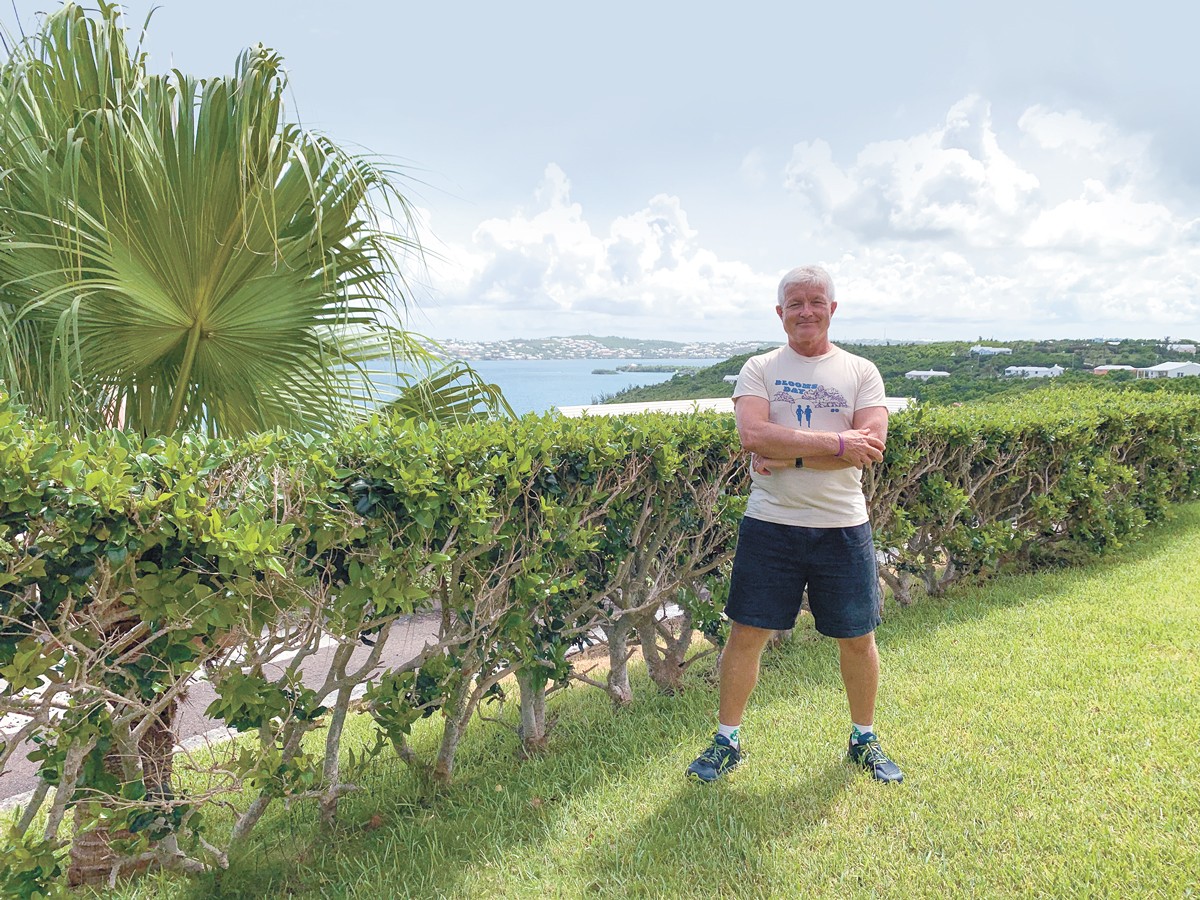 Rory Gorman in his 1980 Bloomsday finisher shirt overlooking Harrington Sound in Bermuda, where he will run Bloomsday this year.

It started off as an accident. But now it's a tradition.

Bloomsday was a rite of passage for new Spokanites, I was told. I had signed up for my first race just a couple months after moving to Spokane. The night before, I went to see a show at the now-defunct Bartlett and maybe I had one-too-many drinks. Oops. But I was still determined to run, so I dragged myself out of bed and took a brisk, slightly hungover, walk to the starting line. I had so much fun that I planned to do it again, and I didn't plan on drinking heavily the night before. But I did. So my second Bloomsday was also spent hungover, slogging up Doomsday Hill in the spring heat. Oops again.

Now my third Bloomsday is here, and although I'm not in Spokane, I'll still be climbing out of bed early in the morning to run 7.46 miles, this time in San Diego. Probably hungover.

I'm not the only one running. After the race was made "virtual" due to COVID-19, nearly 25,000 participants signed up to race from all around the world. (Bloomies have until Sept. 27 to run and submit their finishing times, a time frame that was expanded due to the smoke in the Spokane region.) Though participation has seen a decline since its high point in 1996 (61,298), first-year Bloomsday Director Jon Neill was surprised by this year's numbers.

"... Taiwan, Denmark, Netherlands, China, Japan, Italy..." Neill lists off the locations of some of this year's participants, from just about every continent. "It's exceeded our expectations on the numbers."

The coronavirus shutdowns weren't what Neill had in mind his first year, but he's been rolling with the punches.

"I think the biggest lesson we learned was to be flexible. To be adaptive to what we were greeted with," he says. "There was a point where every week brought a new challenge with planning."

The Bloomsday team and its volunteers realized they would need to construct a race unlike any other previous year, he says. "Once we began to hone in on that sort of attitude, things became a lot more clear for us."

Race entries spiked in the last two weeks before the deadline by about 5,000-6,000 entries, Neill says. The team decided to leave registration open until Sept. 9 and received another 1,500 entries, he says. Race officials have since made online registration available through Sept. 27.

Neill attributes the late surge to this year's novelty. "I think there's a number of people who look at it and say, 'I want to be a part of that.'

We checked in with a few of this year's participants to ask them what made them sign up for the virtual event and where they'll be running. Responses have been lightly edited for length and clarity.

RORY GORMAN
Hamilton Parish, Bermuda
Rory Gorman finished his first and only Bloomsday in 1980 at age 21 during a trip from his native home of County Tipperary, Ireland. Since then, he's moved to Bermuda. But the Lilac City made an impression on Gorman 40 years ago, and 2020 was supposed to be the year the 62-year-old made the pilgrimage back to the Inland Northwest. Of course, COVID changed everything. (He and his wife contracted the virus early on, he says.) Although he won't be able to visit Spokane, Gorman will carry on the spirit by donning his 1980 Bloomsday finisher T-shirt and walking the virtual race.

INLANDER: What were some highlights from your Bloomsday in 1980?

GORMAN: I really remember the usual shuffle as the crowd thins out a little. It was probably the biggest crowd I had ever seen, certainly in the streets of a city. I do remember — that hill, what's it called? — Doomsday.

It was really nostalgia. I'm somebody who doesn't let go easily of old friends or memories. I was a competitive cyclist in Ireland. I became a triathlete out here. I can trace that pretty much to Spokane. That kind of got me going.

Where will you be running this year?

It's a marine lake flushed by the tide, Harrington Sound. It's 7.95 miles. There are a few hills, but they are probably not the length of Doomsday Hill. Bermuda is very hilly, but small hills.

LAURA DAVIES
Wellington, New Zealand
Laura Davies and her husband, David, moved to Spokane in 2014 with their children, but moved to New Zealand in 2018 when he had a job offer with a film company there. An avid runner, Davies says she had participated in Bloomsday a few times and worked at the annual Bloomsday convention. The decision to participate virtually was a no-brainer, she says.

I walked it with my daughter [in 2015], and then next year I ran it. I really wanted to finish in an hour and I got an hour and a minute and it almost killed me. Everyone talks about Doomsday but there's like three hills before that. That's what makes Doomsday so bad.

What made you register this year?

I was really sad to miss it the last couple years, so when I saw it was virtual, I jumped on it. I didn't have the option to do it any other way. If one of the biggest events of a city is a running race, that speaks to me. We fell in love with Spokane. It's just such an amazing race.

So where will you be running in New Zealand?

Miramar Peninsula in Wellington, [along] Scorching Bay. It's coastal everywhere.

The furthest you can go from the coast in New Zealand is 80 miles. That's the one thing about living here, is that it's kind of breathtaking. There are some pretty places here.

ABE HMIEL
Manhattan, New York
Before he went to school at WSU's Pullman campus to study physics, Abe Hmiel had already earned a degree at the State University of New York's College of Nanoscale Science and Engineering. Now working as a data scientist and software engineer for a health care company, Hmiel, 35, says this year's Bloomsday will be his fourth race, having run in 2015, 2016 and 2018.

What made you register for this year's virtual run?

For me, well, it turned out that I was planning to visit my partner in Pullman that weekend. I can work from their apartment so it's not hard taking time off. We were planning to run it on the revised date anyway. The day after I booked my flight, it was canceled.

Where will you be running this year instead?

I know that there's a 7.5-mile loop in Pullman that we can do most of it and call that Bloomsday — around the central to northeast part of the city — it's a road that encircles the college and some more. It's not so easy to find a route like that in New York proper. One thing that always kind of sticks in my mind real well is kind of the patchwork and how idyllic the farms look.

Is there anything you'll miss about running the race in Spokane?

One thing I'll definitely miss is the starting line and the rumbling energy getting going. There won't be any of that for me, but we also might find people in town who are willing to do it. I'll continue running and I'll definitely do Bloomsday again. ♦