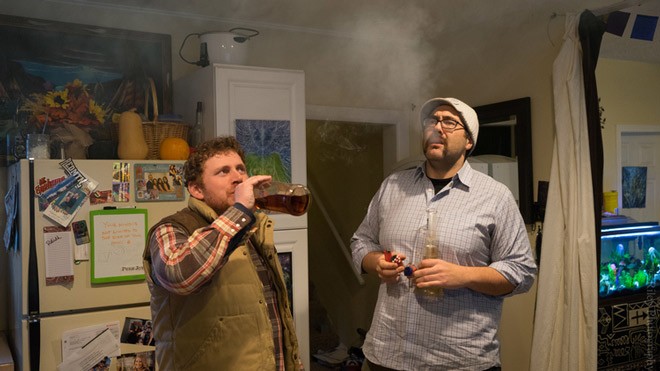 . You're too high to be at a friend-of-a-friend's house party, so you find refuge on the floral couch, circa 1984, in the basement. The couch smells like mothballs and you're in the middle of two guys rambling on about how you shouldn't heckle comedians, about their failed attempts to get laid, about going to musical theater with Grandma.

The conversation is odd and intimate, and it's hard to decipher if the guys are getting funnier or you're just wasted. But you don't care because the couch is comfy, you're too high to move and you're starting to like the guys. You might just love them.

Local comedians Josh Teaford and Casey Strain have managed to create this sort of scenario with their new podcast Weed and Whiskey. The podcast is sponsored by Nicco Glass — a custom glass pipe studio in Spokane — and features commentary, guest interviews and reviews on everything from Blue Dream to Crown Royal, intermixed with discussions about Ernest Hemingway drinking in the Florida Keys and putting your genitals in a vacuum cleaner.

The podcasts, which can be found on their website, vary in length from 11 minutes to just over an hour. The conversations are highlighted by the tinkle of ice cubes in a glass, the click of a lighter and bong bubbles, Teaford's cat, farts and dead space. Teaford jokes about filling up his bong with cheap whiskey and coffee ice cubes, while Strain strictly talks whiskey.

Indica vs Sativa: "I prefer to smoke indicas. I like that couchlock. I want to know I'm stoned. ... When you smoke a sativa and try to watch cartoons, it's a real challenge. ... My feet start tapping like, cha, cha, cha, cha... which is generally not how I wanna feel when I'm watching cartoons."

Blue Dream: "While delicious, it has no bouquet. It smells like alfalfa. It makes me nostalgic and reminds me of weed in the early 2000s, when everything tasted like alfalfa or hay."

What type of weed strain Casey should smoke: "Is Casey the kind of guy that likes to get black-out drunk and watch cartoons or go dancing all night?" ♦ 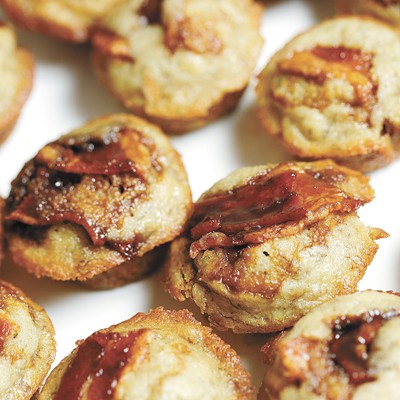 No, marijuana didn't give Washington state a 'violent crime problem'