Daniel Walters photo
"We expect all contractors to follow their local codes," a spokesman for GAF, the roofing materials company that gave Perrenoud their "Master Elite-certification," tells the Inlander.

Perrenoud Roofing had intentionally skipped out on more than a thousand of the city-mandated roofing inspections their clients paid for — without telling them. But owner Nathan Perrenoud had two main defenses when the Inlander asked him about it.

First, he said he was doing his clients a favor by not leaving the roof exposed to the elements while they waited for a city inspector.

And second: Because Spokane hadn't officially established a penalty for refusing to request their mandated inspection, it wasn't actually against the rules. Sure, there was a $75 fee for reinspections but Perrenoud only paid that when their clients learned their inspections hadn't been done and requested it. (Many tenants had no idea the inspections had never been completed.)


"What am I doing wrong?" Perrenoud asked.

"However, the challenge was there was no penalty associated with that violation, which doesn’t provide an incentive for compliance," city spokeswoman Kirstin Davis wrote in an email.

That sparked furious rounds of lobbying by one frustrated property owner, Danielle Martini — who complained that the city had allowed "this contractor to exploit a loophole in its permit system." The Inlander's reporting showed the scope of the problem was even larger than Martini had seen, and other contractors were also ignoring inspection requirements — if they filed their permits at all.

And now, the Spokane City Council has officially passed new legislation making failure to request an inspection a Class 2 Civil Infraction, giving the rule some teeth. To be clear, these are more baby teeth than T-Rex teeth: the maximum Class 2 Infraction penalty is $131.


"That maximum fine of $131 is sure to whip these contractors into shape (sarcasm)," Martini writes in an email in response to the change. "I would like to have seen a limit to the number of citations, like no more than three in a 12 month period, with a suspension of their license as the actual punishment if they don’t comply."

But the city is also implementing another change that may have even more of an impact: They're going to start notifying the property owner, not just the contractor who requested the permit, that the inspections were never completed. That gives owners a chance to at least call their contractor and ask them why they skipped the required step. The city will also change language on their website and on the permits, to clarify the inspection requirement.

"Is there a situation where an inspector would not be readily available, where this causes a problem where he wouldn't be able to get an inspection on time?" Councilman Jonathan Bingle asked during the meeting.

Council President Breean Beggs said he wasn't aware of a circumstance where that would be an issue.

The Inlander's reporting also suggests that is unlikely to be a problem. The city typically gives a full year to residents to complete their inspections, and is willing to grant extensions upon request. While roofing inspections certainly don't catch every potential issue, they can still flag potential problems that may take 5 to 10 years to turn into expensive disasters. 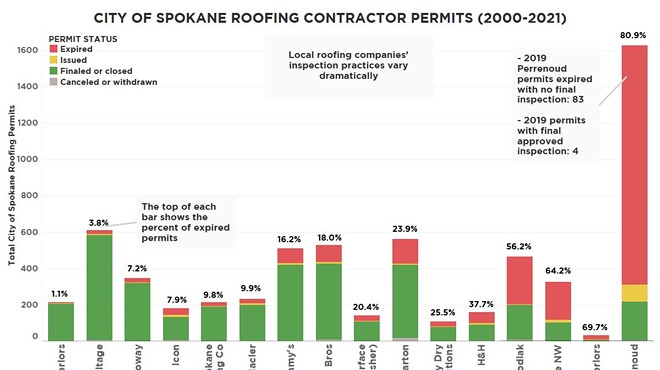 "Thanks to you and the Inlander, they are actually making a change for the better," Martini wrote in her email.

Most of the credit, however, goes to Martini herself. When the Inlander contacted the city, they told the Inlander they were already in the process of making changes due to Martini's complaints.