You've got to let me know: Should I stay or should I go.

In The Old OK Theater in Enterprise, Ore., Matt Mitchell found himself face-to-face with Kent Ueland. It was no shootout at the O.K. Corral, but the intense, eye-to-eye contact provided a similar visualization of the moment. Rather than bullets flying, the air was riddled with the exchange of musical notes.

It was hardly a normal studio recording arrangement for the Spokane-based Trego, but it worked for the band rooted in Americana and folk music. The results of the musical showdown have slowly been rolling out to fans. Though, it's gone much slower than anybody expected when the band finished recording at the OK Theater nearly two years ago — yet another consequence of the COVID-19 pandemic.

The self-titled debut album for Trego will finally be released on Oct. 16, capped by that night's release show at the Lucky You Lounge.

They gathered for five days in November 2019 in Enterprise to cut their first album together.

"Nearly everything for this album was tracked simultaneously, having the space provided by the theater allowed us to do that," Mitchell says. "We were playing off each other. The process of this album is night and day different from other experiences we've had."

Ueland's drum kit was in the middle of the theater facing the band as they played and sang on stage. "We recorded everything live except for horns because there would be too much bleed, and we added a few vocal harmonies," Mitchell says.

"I could physically see Kent bring his stick down, and I could pick my guitar at exactly the same time," Mitchell adds. "That's in contrast to either trying to keep up or getting ahead of a click track while overdubbing. It's energy too — we're feeding off each other in the moment."

A Matt Mitchell performance rarely goes by without a few mentions of musician Bart Budwig, who actually lives in a small apartment in the back of The Old OK. As the recording engineer, Budwig oversaw the process of creating the album. They recorded 16 tracks in Enterprise, 11 of which makeup Trego.

Recording the new album was the culmination of a transition from the band Folkinception to Trego, a re-branding that took place in March 2018. After the five days of recording, Mitchell and the band planned to perform regionally to help raise the funds to finish the album. They opened for Budwig in January 2020 at John's Alley in Moscow, Idaho. Shortly after, the pandemic hit and shut down the band.

"That was our only show in 2020, then I moved onto our bus and was gone on the road for a year and a half," says Mitchell, who previously worked for an advertising agency and owns a 1992 Toyota Coaster bus that he and his wife travel in. "We rented out our house and went to Mexico. When COVID hit we went to Arizona and laid low for a while. I didn't really know what the plan was with the band at that point." 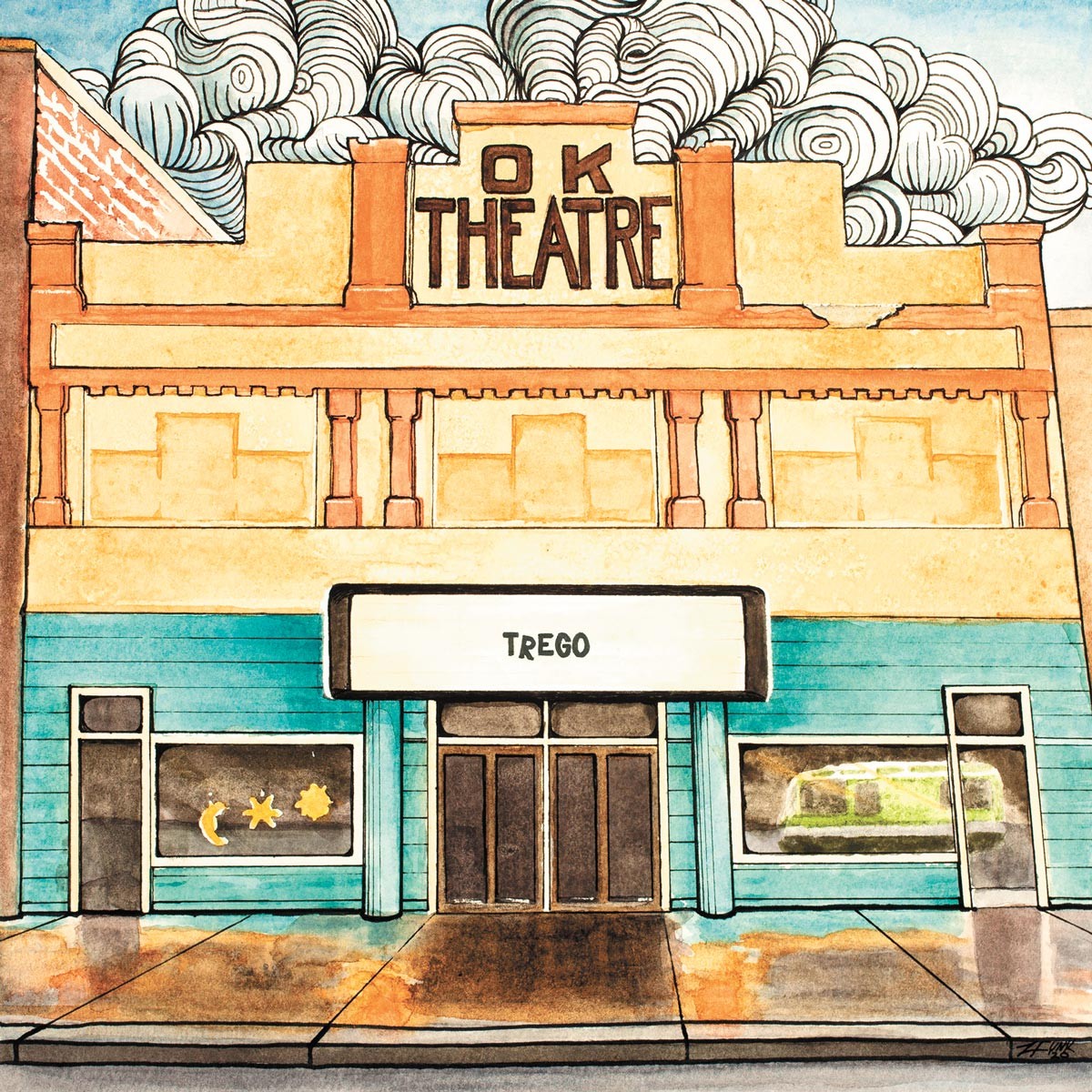 Meanwhile the tracks for the album sat on a computer hard drive waiting for final mixing, mastering and production. No gigs meant no money to finish the record. "It was wait and see. I didn't want to release it during lockdown and not be able to celebrate it," Mitchell says. Eventually, a friend who's a fan coaxed him to do a Kickstarter campaign to raise funds. The album's final touches were fully funded within a week.

What Mitchell, a 2002 graduate of Lewis & Clark High School, has been through in recent years helped shape the music on the album.

The first single from the album was "August," a song that captures the emotions of fire season in the Inland Northwest. He even put the song to video provided by a journalist who was on assignment, covering this year's massive Dixie Fire in California.

"I like Kent's voice and mine together on this song," Mitchell says. "I feel like my voice is a little too pure, and he has that dirt-bag edge that I like. You blend the two and it's beautiful."

The second single, "Scarred Heart," came out on Sept. 17. It was written while Mitchell's brother-in-law was in an intensive care unit after a horrible accident in December 2018. "He was working for the railroad and was told the tracks were clear, but they weren't. He lost multiple internal organs, broken ribs, a collapsed lung and multiple other injuries in the horrific calamity."

"The song is about a very intense, dark experience," Mitchell says. "But it's kind of a Highway 61, Bob Dylan-style rock and roll tune."

Fans will recognize one or two songs on the new album from previous Folkinception or Matt Mitchell Music Company shows and recordings. Included is "Victoria" from the 2017 Folkinception Great Northern album.

"I wanted to capture it in a different light," Mitchell says. "Some of the songs are older, and I thought we hadn't recorded them properly yet."

Mitchell says the entire band is excited to play all 11 tracks at Lucky You for fans to hear for themselves. He expects it to be an emotional night of music.

"I cope with my emotions through my music. Sometimes it's telling a story unrelated about me. I lost two friends this past spring, and a lot of my new tunes are influenced by that experience. It's been a year," he says. "It's great to be lauded and applauded, but if somebody is relating to our music, a song becomes part of their experience. That's the whole point."

After the album release show, Mitchell doesn't know exactly where Trego is headed. But he does know the album, pandemic break, and his inner passion for music have made him yearn more than ever to pursue his dream of playing music for all who will listen.

He recalls a recorded session during the pandemic at the Lucky You in September 2020 when local musicians were finally able to hear one another perform live again. Playing via Zoom and other online forms was becoming blasé.

"There was some crying that night. It was the very first time anyone had heard live music since the start of the pandemic. The moment we started playing we understood what live music meant to us. You forget how powerful it is." ♦

Be sure to check with venues about vaccination/COVID test requirements.