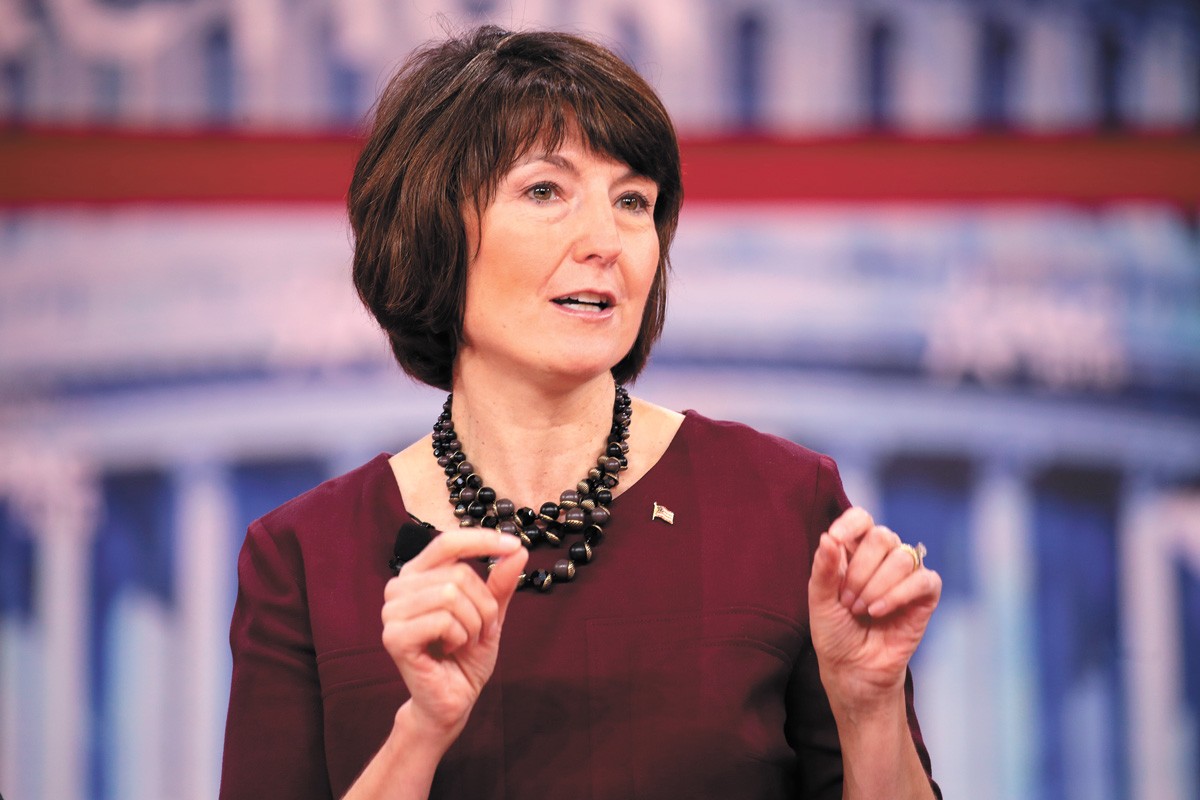 The congresswoman, considered a rock-ribbed Republican, comes from a reliably conservative district while serving as the party's third-ranking leader in the House.

But despite all that, in the wake of a siege on the Capitol by Trump supporters trying to overturn the election, Rep. Liz Cheney, R-Wyoming, voted to impeach the president last week.

So there were brief moments when some political observers speculated that the person who previously held Cheney's duties as the House Republican Conference chair — Rep. Cathy McMorris Rodgers — might follow suit. The two other Republican members of Washington state had voted to impeach, including Jaime Herrera Beutler, McMorris Rodgers' former legislative aide and senior adviser.

But not McMorris Rodgers.

While she wrote in a statement that "President Trump showed a complete lack of leadership in the face of an attack on the U.S. government," she concluded that his words were still constitutionally protected speech and questioned whether the swift impeachment process was motivated by "nothing more than politics."

Yet unlike most defenses of Donald Trump issued by Republicans last week, it included something unique: a personal confession. McMorris Rodgers suggested that she had played some part in the "crisis of contempt in America" that led to "the destruction and violence we saw last week and throughout the last year."

While she accused the left of trying to "silence" conservatives, she acknowledged that Republicans like her had "excused and defended" Trump's behavior.

"For Trump supporters like me, it meant turning a blind eye to arrogant, prideful, and bullying behavior," McMorris Rodgers wrote. "We all need to take some responsibility, tone down the rhetoric, stop silencing anyone and everyone who might disagree with us, and do better."

McMorris Rodgers' office didn't respond to an interview request from the Inlander. But to her supporters like former Spokane County GOP state committeewoman Beva Miles, the statement was a testament to the congresswoman's humility and introspection.

"I see her acknowledging that she stands with the rest of us," Miles says. "She's standing equal and taking equal blame."

"She's not on the side of democracy," Riccelli says "And future generations will judge her harshly."

Either way, her statement is an artifact representing the contradiction that McMorris Rodgers has been trapped in during the Trump years. She kept calling for politics to be more civil. But the rhetoric of the president she supported was calling for something closer to civil war.

THE TEARS AFTER TEAR GAS

In her own impeachment comments, meanwhile, Herrera Beutler detailed how the president had thrown a match onto a tinderbox, inflaming a mob that beat police officers, shattered Capitol windows and raided congressional offices.


"During the president's rally on January 6, he repeated phrases like 'fight like hell,' and 'we're going to have to fight much harder,'" she tweeted. "Many coming to the rally did intend to fight, with physical violence. Leading up to the rally, specific threats were numerous. Hundreds of TikTok videos promoted violence. Thousands... used hashtags promoting a second civil war."

The morning after the riot, the sun was shining down on a nearly empty National Mall. The tear gas had dissipated. The gallows and noose had been dismantled. The rioters were gone — four of them dead — and the chants of "Hang Mike Pence" were no longer echoing through the halls of Congress.

And McMorris Rodgers, says Miles, "was alone in the Capitol."

"No one on the mall; no one out there at all," says Miles, who exchanged texts with McMorris Rodgers that day. "Totally beautiful, totally peaceful. And she sat down and cried."

"Today, I find myself weeping for my country," McMorris Rodgers wrote in a text message, according to Miles.

Miles describes McMorris Rodgers as someone with a deep, "almost palpable" sense of empathy. So when the country is wounded, Miles says, she feels that wound as well.

"She's brokenhearted," Miles says, "about the corruption she sees, about the brokenness of our government, about the distance between the two parties."

From the very beginning of the Trump administration, McMorris Rodgers had touted values like "civility" and "unity," and spoke of bridging that divide.

In a profile with Christianity Today last October, she proudly recounted how, after she was booed at a Martin Luther King Jr. Day event in 2017, she moved to hold "Unity Dinners" where a diverse group would share "struggles and heartache and loss in their lives."

But Trump, meanwhile, kept speaking in terms of "losers," "suckers," "enemies of the people" and "shithole countries."

At times, McMorris Rodgers did critique Trump. She objected to Trump's family separation policy and slashing of refugee numbers, and she decried his mockery of disabled people and the video where he bragged about grabbing women "by the pussy." She voted against Trump's emergency declaration to fund the border wall and, like most Republicans, defied his demand for Congress to approve $2,000 COVID-19 stimulus checks.

Yet for the most part, McMorris Rodgers was a loyal Trump defender to the end. In the same impeachment statement in which she decried Trump's behavior during the riot, she praised the president for having "supported the rule of law."

The mob at the Capitol had been united around a single incendiary claim, a lie that had penetrated deep within the rank and file of the Republican Party: that the election had been stolen through a vast and sweeping conspiracy of fraud.

It was a claim that had been extensively debunked, decried and dismissed by Republican election officials, Trump-appointed judges and even Trump's own attorney general, Bill Barr. But McMorris Rodgers didn't try to debunk the conspiracy theory.

Instead, like many Republicans, she signed on to support a futile Texas lawsuit that attempted to overturn the election, arguing that "President Trump has every right to pursue legal recourse in response to claims of voter fraud and election impropriety."

"It's not like she just stood by," Riccelli says. "She fanned the flames of the fire. She poured gasoline on it."

The day before the Capitol riot, McMorris Rodgers had told the Spokesman-Review, she planned to object to the Electoral College count as an explicit opportunity to "amplify the voices of millions of Americans who do not have trust and confidence in our election process."

She cited a debunked claim from some Pennsylvania state Republicans that there had been over 200,000 more votes than voters, calling the alleged disparity "extremely concerning" and that voters "deserve answers on this discrepancy."

Yet voters — or anyone with access to Google — already had answers. A week before McMorris Rodgers' comments, the Pennsylvania Department of State had explained in an exasperated response that the "so-called analysis" had apparently been relying on an incomplete database that was missing data from several major counties.

The day of the Capitol siege, Trump used the myth from Pennsylvania as one of many ways to whip up the crowd into a fury before the riot.

"Pennsylvania was defrauded!" he shouted.

For her part, McMorris Rodgers was outraged by the riot, calling it "disgraceful and un-American," and she was one of the few members of Congress to change her mind about the Electoral College vote as a result.

"I have decided I will vote to uphold the Electoral College results, and I encourage Donald Trump to condemn and put an end to this madness," she wrote in a statement.

McMorris Rodgers' last-minute reversal, however, was the sort of half measure that satisfied few constituents.


"I didn't agree with her vote. I thought she should have stood and voted against [the certification]," says Miles. "But I understand that she was placed in a horrible position."

According to a Washington Post/ABC News poll, over half of Republicans think the Republican leaders who tried to overturn the election didn't go far enough.

Meanwhile, her reversal didn't stop Evan McMullin, McMorris Rodgers' former chief policy director in the House Republican Conference, from accusing the congresswoman of being "one of Trump's earliest enablers in Congress."

The congresswoman, he charged in a Twitter message to the Seattle Times, had aggressively pressured "Republican leaders to support [Trump] even after the danger he posed was clear," and "pursued political opportunity for herself in his rise despite that danger."

Haley Byrd Wilt, a congressional reporter for The Dispatch, a conservative online magazine, says that while McMorris Rodgers' reversal "goes to show how phony the whole effort was to begin with," it could put McMorris Rodgers in a slightly better position to reach across the aisle than many of her colleagues.

Still, Byrd Wilt says, with trust within Congress nearly at rock-bottom levels, it would take a lot of work to rebuild those relationships, with some Democrats blaming Republicans for putting their lives in danger.

"A lot of Democrats genuinely fear some of their Republicans colleagues," Byrd Wilt says.

Two and a half years ago, McMorris Rodgers was celebrating a new sense of hope she credited to Republican leadership, saying at a press conference that "people are dreaming again and they are optimistic about the future."

But during this season, in the aftermath of the siege on the Capitol, after Republicans lost control of the House, the Senate and the presidency, that sort of optimism has been replaced by something closer to despair.

"The undergirding structures of our country are crumbling — FBI, Department of Justice, intelligence community, courts, Congress, etc.," McMorris Rodgers wrote in a text message to Miles the day after the riot.

"John Adams said that our government was for 'a moral and righteous' people," she continued. "We have lost our way, with corruption, abuse of power and position, and lawlessness."

It's one of those comments that, depending on how you squint, could be read as echoing Trump's incendiary rhetoric — or condemning it. ♦