After the Tsunami, Japan’s Sea Creatures Crossed an Ocean 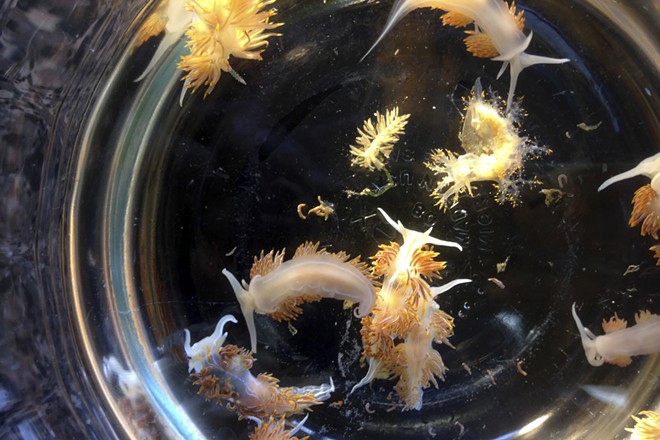 John W. Chapman via The New York Times
In an undated handout photo, Sea slugs brought to Oregon by a Japanese derelict vessel from the Iwate Prefecture. Hundreds of species — mussels, crabs and others — traveled thousands of miles on debris to American shores after the 2011 tsunami in Japan.
By MARTIN FACKLER
© 2017 New York Times News Service

TOKYO — The towering tsunami that devastated Japan six years ago also unleashed a very different sort of threat onto the distant coastline of North America: a massive invasion of marine life from across the Pacific Ocean.

Hundreds of species from the coastal waters of Japan — mostly invertebrates such as mussels, sea anemones and crabs — were carried across the Pacific on huge amounts of floating debris generated by the disaster, according to a study published Thursday in Science. Less than a year and a half after the enormous earthquake and tsunami on March 11, 2011, left more than 18,000 people dead or missing in Japan, the first pieces of wreckage began washing up on the shores of Canada and the United States.

To the surprise of scientists, the debris was covered with sea creatures that had survived crossings that in some cases had taken years.

The study’s authors say it is too early to tell how many of these tiny invaders have gained a foothold in North American waters, where they could challenge or even displace native species. While such “rafting” of animals across oceans happened in the past, the authors say the Japanese tsunami is unprecedented because of the sheer number of organisms that it sent across the world’s largest ocean.

And this points to one of the main findings of the study: that this mass migration was the result of not just the huge natural disaster, but changes in human behavior. Such large numbers of marine animals were able to cross the Pacific because they rode on debris — made of materials such as plastic and fiberglass — that proved durable enough to drift thousands of miles.

This flotsam ranged in size from coolers and motorcycle helmets to entire fishing boats and even larger objects, teeming with living sea animals that were native to the coastal waters of Japan, but foreign to North America.

The washed up objects were found to carry 289 invasive species from the western Pacific. While most were invertebrates, a few vertebrates also survived the long journey, including a small number of emaciated fish that were trapped inside the water-filled hulls of half-sunken fishing boats. Since the authors and volunteers were only able to inspect a fraction of these objects, Carlton said he believes hundreds more species likely made the crossing. 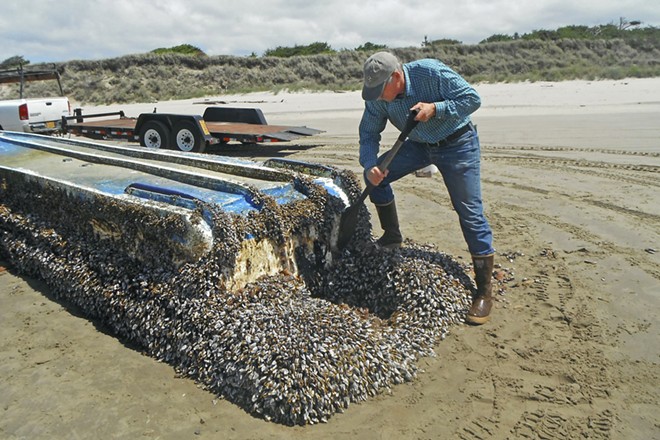 Russ Lewis via The New York Times
In an undated handout photo, John Chapman inspects a derelict vessel from Japan that washed ashore on Long Beach, Wash. Hundreds of species — mussels, crabs and others — traveled thousands of miles on debris to American shores after the 2011 tsunami in Japan.