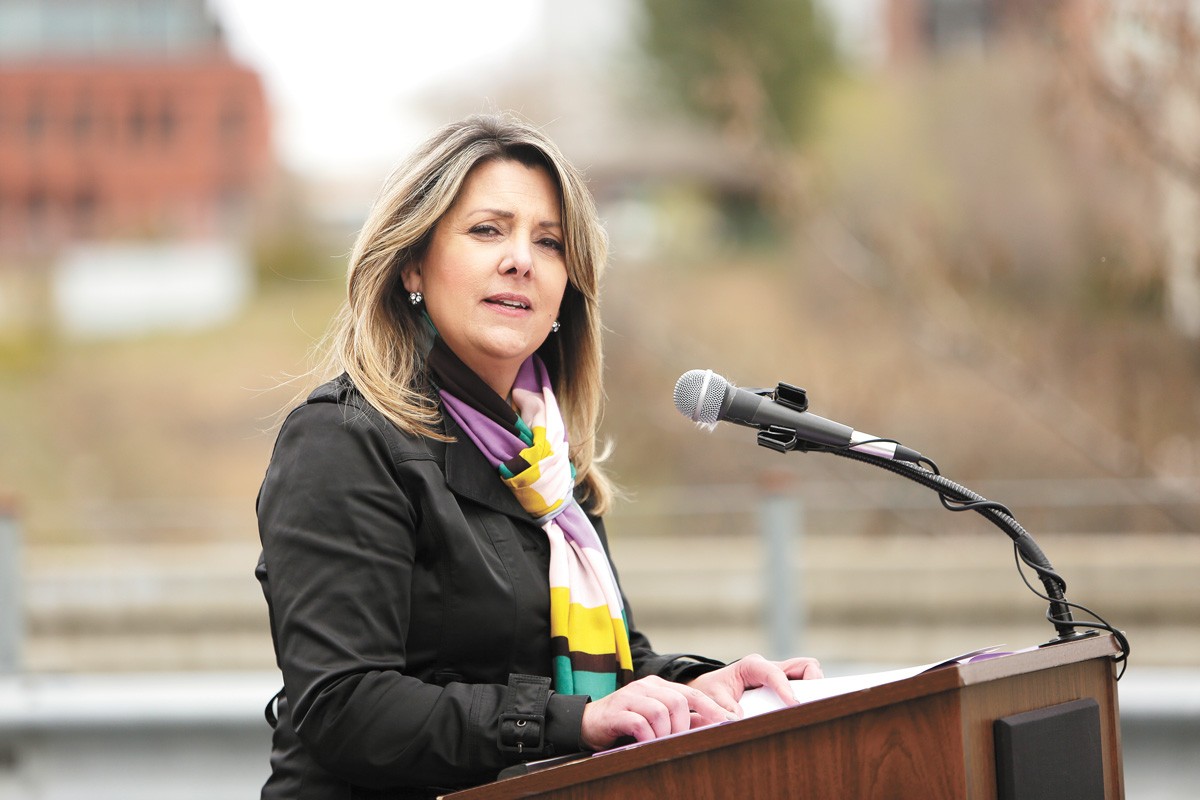 When Spokane Mayor Nadine Woodward kicked off her first year in office, she praised CEOs who "observed and learned the culture of a place before they started instituting changes" and promised she would do the same.

Woodward kept most of former Mayor David Condon's team on staff and brought on an experienced city administrator, Wes Crago, to be her second in command.

"If there's going to be changes made, they'll be something everybody collaborates on, they'd be telegraphed well ahead of time," he told the Inlander in January. "I don't like government surprising anyone."

And for 10 months, as Crago helped lead City Hall through responding to a once-in-a-century pandemic and reacting to protests demanding criminal justice reform, the Woodward administration hewed to that "no surprises" mantra.

That changed late last month when Crago abruptly resigned. The City Council didn't see it coming and still hasn't been told what happened.

The city is still in the middle of a pandemic. It still has to find a way to compromise on a long-overdue police contract and ongoing battles over police reform. The preliminary budget Woodward presented last week defers some of the toughest decisions for later.

But after months of being mired in coronavirus battles, Woodward is ready to start reshaping City Hall according to her vision. But instead of slowing down as the result of the loss of her No. 2, Woodward is talking about making more changes faster.

"Now that we've been in this time of perpetual pause — in between the phases of reopening — it's given me time to reflect," Woodward tells the Inlander. "It's revealed some areas where I think we can do a better job. Now is the time to start initiating and realigning the organization."

THE ADMINISTRATOR AND THE AMBASSADOR
Back in late February, Woodward and Crago stood together at a press conference announcing an independent investigation into concerns raised about the Community Health and Human Services department, both framing it as part of their commitment to be candid with the public.

"The community expects the city to be transparent," Woodward said then.

When Crago himself resigned last month, however, there was no press conference, no press release and no forthcoming explanation.

A public record request for a resignation letter only turned up a late-night email sent on Sept. 23 in which Crago thanked Human Resources Director Amber Richards for "being such a pro in a difficult situation today" and wrote that he would like to "take that opportunity to resign." He also asked that a reference to his "heart being with smaller with towns" be included in his farewell. 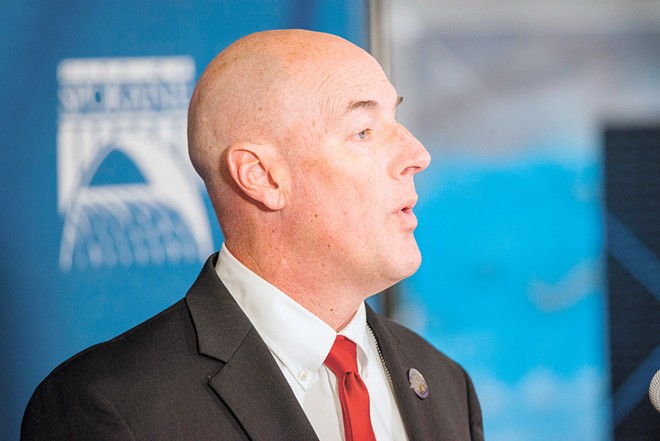 In a Facebook post, Crago described his resignation as "a gut-wrenching decision; painful and disconcerting" but ultimately the right move. He declined to elaborate on what happened.

"We had a conversation," Woodward tells the Inlander in a phone interview. "And he decided to resign at that meeting."

But when the Inlander asked her directly if she'd asked him to resign, she dodged the question the same way that city spokesman Brian Coddington did repeatedly last month.

"He just decided to resign," Woodward says. "That's all I can say."

She hasn't been any more forthcoming with City Council members.

"No one has shared anything with me," says Council President Breean Beggs.

Woodward, however, knows first hand how newsworthy the truth behind high-profile city resignations are. Exactly five years and one day before Crago's resignation — when Woodward was a TV anchor at KXLY — she called the sudden resignation of Spokane's police chief after "less than three years on the job" a "bombshell announcement." Journalists would later uncover public records showing that the mayor's staff had given misleading statements related to the resignation, and Mayor Condon found himself entangled in the fallout for nearly a year.

And while a city administrator isn't as visible as a police chief, it's one of the most influential positions in City Hall. In fact, as the city plans for a national search for the next city administrator, Woodward indicates that Crago's replacement might often end up running much of City Hall.

"I'm looking for somebody who obviously is a strong leader who is able to oversee operations of City Hall, so I can be the type of mayor that I want to be," Woodward says.

Where Condon was known as a behind-the-scenes, charts-and-graphs technocrat, Woodward imagines herself as an "ambassador for the city."

Woodward, after all, came in with very little management experience, but had three decades of TV experience interacting with the public.

"I want to be out in the community and visiting schools and talking to constituents and holding forums and talking to businesses. ... And I'm hoping that as soon as we're on the other side of COVID, I can start doing that."

That doesn't mean it would all be ribbon-cuttings, she stresses. She says she still has plenty of initiatives that she wants to concentrate on, including around economic development, public safety and homelessness.

So on the one hand, Woodward says "you can't be completely removed from what goes on in City Hall," but also says, "I don't want to be stuck in City Hall on the seventh floor in meetings all day."

ON SHUFFLE
The resignation — whether voluntary or involuntary — of Crago only came after weeks of the mayor meeting with 15 high-level senior staffers, particularly those involved in the city's emergency response to COVID.

"I really wanted to take the time to do just a one-and-one and just get some reflection from them," Woodward says. "Now that many of us were back to City Hall, we can assess how the year has gone by."

She says that experience showed what the city was capable of, but also flaws in the existing structure. Without a "real line of succession" to hand off decisions to, she says, leaders were sometimes overloaded. Communications could suffer.

In the same message announcing Crago's resignation, Woodward also teased a new leadership structure, one that would name specific staffers to problem-solve priorities in specific areas — like public safety, infrastructure and the budget — and be in charge of sharing information about them with the rest of City Hall and the City Council.

"It's so easy to get stuck in your area, your division, your silo and not know what's going on across all divisions in City Hall," Woodward says.

She has her eye on updating the city's strategic plan — the document that charts out an agreed-upon course with the council. Beggs, the council president, praises Woodward for improved communications. But that doesn't eliminate major disagreements.

Last week, her administration submitted the preliminary budget to the council. At first glance, it appears to avoid any major layoffs, despite the anticipation of the pandemic sapping away city tax revenue. It even funds a new economic development division.

But it does that, says Beggs, with "a lot of red ink" and new uncertainties.

Right up front, Woodward's budget plans to spend $5 million from reserves — a little over 10 percent of the city's total reserves.

"That's why you have reserves, right?" Woodward says. "For a rainy day? And if this isn't an example of a rainy day, I don't know what is."

Beggs acknowledges the huge financial challenge this year. But he says the problems with the budget go deeper than that.

There's nothing, for example, allocated for the city's potential contribution to warming shelters, which could cost $2 million or $3 million from reserves, Beggs says.

"We didn't want to put any dollar figures right now, because we're still working on how we're going to fund that," Woodward says.

"That's not what the voters wanted," Beggs says. "They paid extra property taxes to have extra officers and firefighters. They're not getting that right now."

The budget also doesn't fund many of the council's priorities, he says.

"It's challenging because it puts the council in the position of being the bad folks that make cuts," Beggs says.

On top of all that, there's another looming unknown: The Spokane Police Guild contract. Earlier this year, the council gave the Woodward administration its biggest rebuke so far by unanimously rejecting the proposed contract, arguing that it was a step backward for police accountability.

Those contract talks are continuing. But if the contract manages to pass, suddenly the city could need to shell out anywhere from $8 million to $10 million for over three years of deferred police salary wages.

That may not even be the most controversial police battle the city will contend with this year. As Beggs — an attorney who's previously sued Spokane over police brutality — pursues a sweeping police reform agenda, he and Woodward are trying to ask the community what they want by holding face-to-face talks.

They'll put 15 leaders — representing the mayor's office, the City Council, cops and activists — in a room with a facilitator and see what they can learn.

Woodward says she's proud of what her administration has accomplished so far, including opening up a new police precinct. But her ambitions go a lot further and she wants to pursue them at full speed.

"You only have a short amount of time to be able to accomplish your goals in this office. That's the way it's set up," Woodward says. "I feel like I've already lost some time." ♦