Ain't Afraid of No Feminism 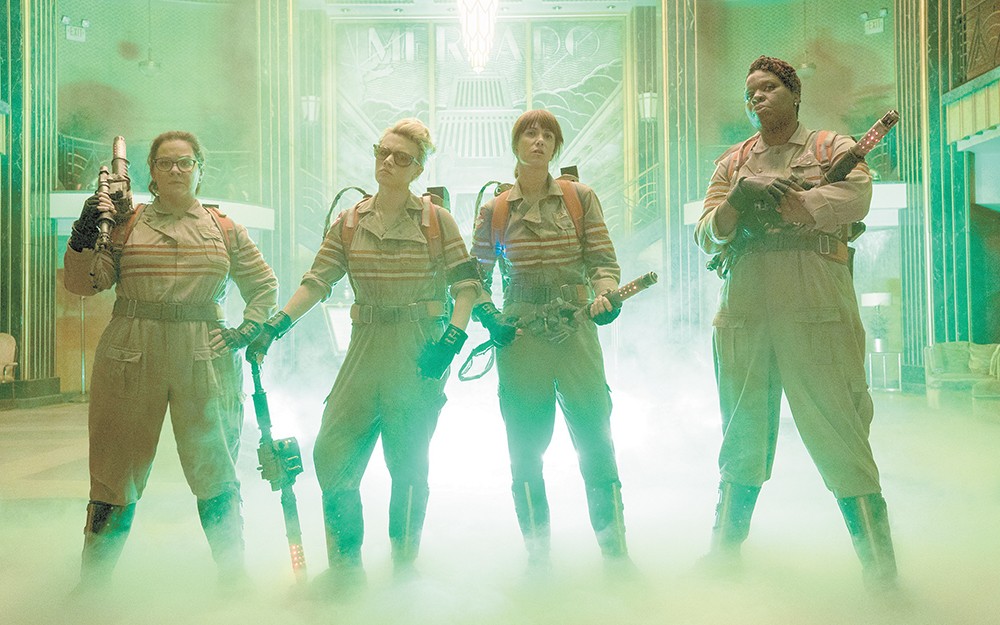 My reaction to the idea of an all-female Ghostbusters reboot?

I'm desperate for movies about women doing all sorts of things — including silly stuff like engaging in experimental particle physics, playing around with total protonic reversal and saving New York City — but I'd also like women to get their own stories and the opportunity to create their own iconic characters.

I knew that even if this remake turned out to be completely amazing, any success would come with an asterisk. There would always been the "real" Ghostbusters — the original 1984 movie — and the "girl" Ghostbusters. Women deserve better than to be constantly tagged as the lesser, the other, the not-quite-as-good.

I still believe all of that. But I'm getting to have my feminist cake and eat it too, because Saturday Night Live badass Kate McKinnon has gone and created an instantly iconic new character in gleefully reckless physicist and tinkerer Jillian Holtzmann, simultaneously a snappy dresser, a devil-may-care snarkster, a master of the mysteries of the universe, and a creator of cool crap that goes "boom!" Holtzmann is clearly the analogue here for Harold Ramis' Egon Spengler from the original movie, but she's nothing like him. She's nothing like any female character The Movies have ever seen. She's powerful in a way that has nothing to do with her appeal to men, all too frequently the only power women onscreen are allowed to deploy. She's brainy comic mayhem, a touch of Back to the Future's Doc Brown and a whole lotta the Doctor (Doctor Who, that is). She's the authority of science combined with the freedom of no f---s given, and she's not the sort of woman we typically see women granted the cultural permission to be.

This new Ghostbusters would be worth hailing for Holtzmann alone... but happily, there's much more to cheer. The snappy script by director Paul Feig and Katie Dippold zings from the movie's opening moments with cunning, snappy verve, often out of left field: pay close attention to the commentary offered in the opening scene by the tour guide of an historic NYC mansion that soon turns up haunted. The plot follows a similar track to that of the original, with Columbia University physics professor Erin Gilbert (Kristen Wiig) and the more paranormally inclined academic Abby Yates (Melissa McCarthy) teaming up, along with Holtzmann, to hunt down the ghosts suddenly showing up all over town.

Both actors have toned down their sometimes overamped comic personas here, making it less easy to determine which characters from the original films Gilbert and Yates are shadows of: simultaneously, they're neither and both Dan Aykroyd's Ray Stantz and Bill Murray's Peter Venkman. As with the authentically fresh Holtzmann, they aren't attempting to imitate anyone, which distinguishes this movie from the spate of far more reprocessed reboots, remakes and do-overs we've been subjected to of late.

Unlike the original — in which ghosts started appearing at precisely, by pure coincidence, the same moment when a new business came into existence to deal with them — there's actually a reason baked into the story about why ghosts are now popping up, prompting the formation of Gilbert's and Yates' project, which isn't an entrepreneurial effort but a scientific research endeavor to capture and study them. Baked into that reason is the feminism of this new Ghostbusters. (Sorry, boys who are afraid of girls: this is an unabashedly feminist movie. But it's still super fun, promise!)

There are a few not-really-throwaway lines of dialogue about nasty comments the women receive online, as in a response to videos of ghosts they post on YouTube; these comments are nearly identical to some of those that the mere idea of this movie itself has generated.

Far more incisive is the villain of the piece, a literally basement-dwelling creep (Neil Casey) who justifies the very bad things he does as his way of striking back at bullies. Contrast this with Gilbert's and Yates' tales of being denigrated for their deliciously dorky oddness. Guy treated badly wants to end the world; gals treated badly turn their pain into something positive, and find themselves in a position to save the world. ♦