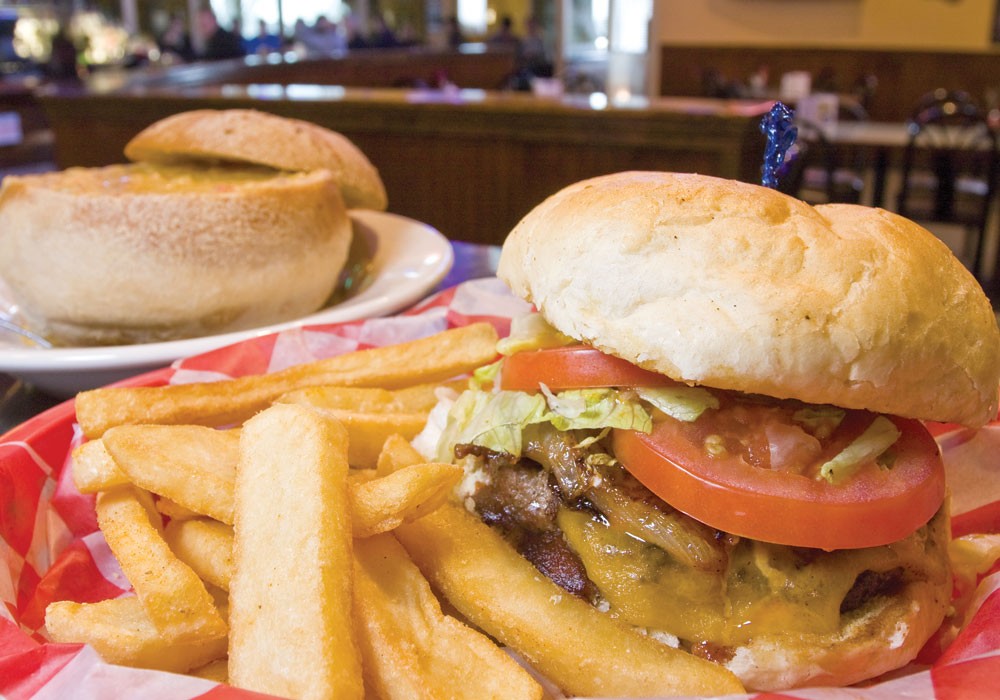 Earn your ticket to fame for chowin’ down. At Scrud's Gourmet Pub, eat the five-pound Bodacious Burger Challenge ($25) in an hour or less and earn your spot on the “Wall of Fame.” And the meal is free! Survive the Dig Your Own Grave Challenge ($15) to consume eight blistering wings — so hot that you’re asked to sign a waiver first — in 20 minutes or less to make the “Wall of Flame.”

If you haven’t a taste for stardom but still want a tasty meal, Scrud’s satisfies like a classic American diner. Most burgers are a third-pound and flame-broiled, like the Classic ($7) with lettuce, tomato, onion and pickle. The one-pound Scrud burger, stuffed with bacon and cheese, is topped with a garlic-onion-mushroom sauce and both cheddar and provolone ($11). Chicken sandwiches are grilled or fried ($8), with a few dolled-up versions, like the Chicken Cordon Bleu with ham, Swiss and bacon ($9.50). All buns are scratch-made daily. Wings range from Wimpy to Inthane ($8.50), and all include freshcut fries. Wash it all down with bottomless fountain sodas ($1.50) or vintage bottle sodas (the way God intended us to drink soda) like Moxie, Nu Grape, Bubble Up, Kiss, Nesbitt’s Peach, Strawberry and Orange ($3).

The cook at Scrud’s is none other than Scrud himself — Bret Lyman, whose childhood nickname stuck to eventually inspire the restaurant’s name too. The Coeur d’Alene Scrud’s is the second of its kind for Bret and wife Emily, who opened the flagship Scrud’s two years ago in Wyoming before relocating north to the Panhandle.

Burger and a Brew

The idea was born on New Year’s Eve 2009, on a drive to Seattle, when Perry Vinson and girlfriend Jen Whitney discussed transforming the failing Homeplate Bar and Grill in Liberty Lake into a fun and profitable restaurant. Almost two years later, with a larger remodeled kitchen, four menus, increased staff, a new name and Hollywood-themed décor, True Legends Bar and Grill is a thriving, family-friendly sports restaurant.

Though customers can seat themselves within comfortable proximity to a number of televisions, the largest flat screen, at 230 inches, is located in the central bar area.

In the large, high-ceilinged dining area, the TVs do not reach conversation-disturbing decibels, which allowed my companion and I to discuss the menu without shouting. We decided to start with their salmon chowder ($8). The heavy cream base is flecked with dill and flaked salmon. Order a cup; an entire bowl may not leave room for your burger or sandwich. Or steak. Or country meatloaf. Or homemade pizza. Or Cobb salad.

Yes, the full menu has many items, but the homemade flatbread pizzas and entertainment-themed burgers and sandwiches (like the Italian Job, the Duke and the Johnny Cash) are the most popular.

Each burger features an Angus beef patty, which can be swapped out for vegetarian options. I tried the beef sliders ($8), while my fellow diner ordered the Duke ($10). The Duke has western fixin’s: caramelized onion, homemade bourbon barbecue sauce, smoked bacon, cheddar, lettuce and tomato. The beef patties were juicy without being greasy and were grilled to perfection. The barbecue sauce had a sweet burn that finished with a mild citrus flavor. And the bacon? Crisp and meaty.

True Legends is a big supporter of local softball and volleyball teams and features local musicians on Tuesdays. While all of this is great, I really just want winter to end so I can go back for a bacon burger and a pitcher on the patio. (Annemarie Frohnhoefer)