Alabama abortion ban is blocked by a federal judge 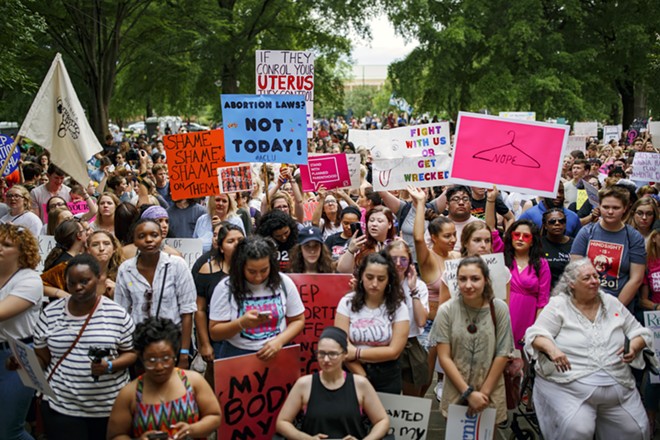 Melissa Golden/The New York Times
Abortion rights protesters gather in Birmingham, Ala., on May 19, 2019, to protest an Alabama state law that would have made it a felony for doctors to provide abortions in almost all circumstances. A federal judge blocked the near-total ban on abortions on Tuesday, Oct. 29, 2019, stopping the legislation from taking effect next month.
By Alan Blinder
The New York Times Company

A federal judge on Tuesday blocked a near-total ban on abortions from taking effect next month in Alabama, ensuring the procedure remains legal and available in the state while the legislation winds its way through the courts.

The ruling against the Alabama law — the most far-reaching measure passed by state lawmakers this year — was an early step in a legal confrontation that abortion opponents orchestrated to try to reach the U.S. Supreme Court.

Several states, including Missouri, Kentucky, Mississippi and Georgia, approved laws that would ban abortions after the heartbeat of what becomes the fetus can be detected, all with the aim of setting the stage for the renewed legal fight over abortion rights. In each of those states, a federal judge has blocked the measures from taking effect.

Judge Myron H. Thompson of the U.S. District Court for the Middle District of Alabama issued the injunction against the Alabama law, which banned abortion at every stage of pregnancy and criminalized the procedure for doctors, who could be charged with felonies and face up to 99 years in prison. It included an exception for cases when the mother’s life is at serious risk, but not for cases of rape or incest.

The Alabama law had been set to take effect on Nov. 15.

The legal challenge was mounted by the ACLU and the Planned Parenthood Federation of America on behalf of Dr. Yashica Robinson, an obstetrician and gynecologist in Huntsville who provides abortions.

Opponents of the law hailed the injunction as a positive development as the case pushes ahead. They also said it comes as a relief to the women who believed the procedure had already been outlawed in their state.