Bardo can't rise above its navel-gazing.

Alejandro González Iñárritu has never been a subtle filmmaker. The Oscar-winning director of Birdman and The Revenant has always made grand, serious statements with his movies, and that doesn't change when the subject of the movie is himself. In Bardo, False Chronicle of a Handful of Truths, Iñárritu interrogates his own life and career via a thinly veiled surrogate, following in the footsteps of master filmmakers from Federico Fellini (8½) to Woody Allen (Stardust Memories) to Bob Fosse (All That Jazz).

When Iñárritu delivers sweeping artistic visions of the state of humanity, they may generally be pompous and insufferable, but at least they're empathetic. In Bardo, he applies all of his stylistic excess and bombast to prop up his own apparent insecurities.

Iñárritu's proxy is Silverio Gama (Daniel Giménez Cacho), a Mexican filmmaker like Iñárritu who has received international acclaim and has been living and working for many years in the U.S. Silverio isn't quite as famous as Iñárritu, and he hasn't won Oscars or worked with movie stars. He started his career as a journalist, and his movies are documentaries or "docufiction," as he refers to them. He's renowned for depicting the lives of the impoverished, but he's become privileged and isolated. He returns to Mexico to accept a prestigious award, but many in his home country, including his former collaborator Luis (Francisco Rubio), see him as a sellout who serves American interests.

At a party celebrating Silverio's career, Luis unloads on him with a barrage of criticisms about his latest movie, ones that of course could all be applied to Bardo itself. But preemptively listing all of his own movie's flaws doesn't absolve Iñárritu for his tedious filmmaking indulgences. As Silverio takes stock of his life and career, feeling empty and unfulfilled, Bardo blurs the lines between fantasy and reality, looping around to certain moments over and over, merging past and present.

Silverio is more of a symbol than a person, as Iñárritu uses him to work out issues of class conflict, creative freedom and national identity. Cacho plays the character as a blank slate, buffeted from one humiliation to another, and it's hard to imagine him as someone with a strong enough perspective to become a revered creator. Everything that Silverio does, from buying pet fish for his son to participating in a contentious interview with Luis, gets weighed down with allegorical meaning.

That makes it tough to engage emotionally with Silverio or his family members, even as they deal with deeply personal trauma. An early scene shows Silverio's wife, Lucia (Griselda Siciliani), giving birth to a son, only to have doctors place him back in the womb, saying that he doesn't want to come out yet. It's an absurdist way to illustrate the death of the couple's infant child, a specter that hangs over the entire family, including their other two children (Iker Sanchez Solano and Ximena Lamadrid) as they grow up.

That's just one narrative thread in this overstuffed film, which is 22 minutes shorter than the version that played at film festivals earlier this year, but still runs more than two and a half hours. Iñárritu seems incapable of staging any small-scale human drama, and nearly every scene features showy visuals, including multiple elaborate long takes that recall the central gimmick of Birdman. The technical wizardry is more distracting than enlightening, drawing attention to itself at the expense of the characters.

Despite his wealth and accolades, Silverio is as miserable and tormented as the characters in Iñárritu's earlier films, including 21 Grams and Babel, and Bardo is similarly grim in its assessment of the human condition. It's the self-important musings of an artist who's overestimated his own significance. ♦

The School for Good and Evil dutifully adapts popular, familiar YA fantasy novels 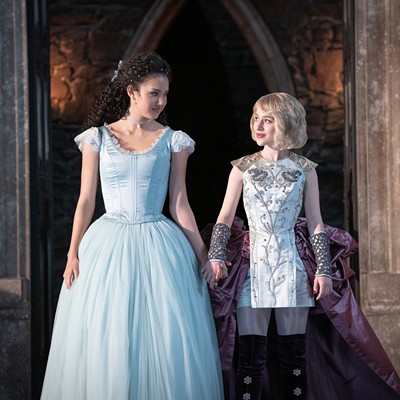