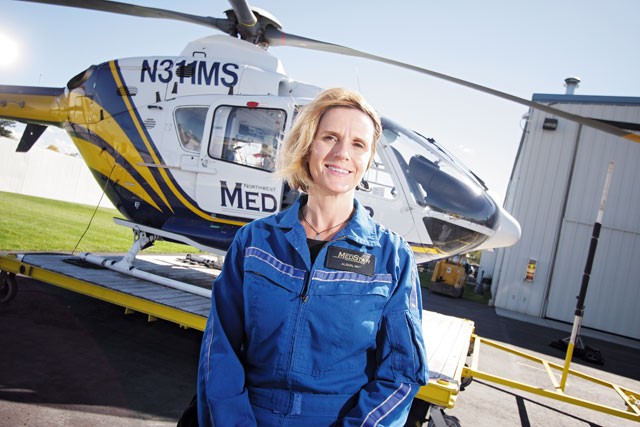 Alison Scott is a frequent flyer, but not to anywhere you’d want to visit. In her job as a registered respiratory therapist with Northwest MedStar, Scott took more than 110 flights in two helicopters and a small, fixed wing airplane last year, helping people survive medical emergencies.

Northwest MedStar is the region’s critical care transport. In 2009, it transported about 3,500 people while operating 24 hours a day, every day of the year.

Scott is always paired with a registered nurse who’s trained in adult or perinatal care. While 90 percent of the flights are inter-hospital transports of seriously ill or injured patients, the other 10 percent are “on-scene” emergencies or assistance with search and rescue missions.

Scott, 46, never knows what’s going to happen when she arrives for work, and that’s fine with her.

“It’s fun because you never know what you’re going to be doing or where you’re going. We go to Seattle all the time. I could end up hiking up part of a mountain, or we may have to land on a highway to help someone,” she says.

On the way to an emergency, she usually sits in the front of the helicopter, with complete confidence in the Metro Aviation pilots who do the flying for Northwest MedStar.

“MedStar has strict safety standards, and we have awesome pilots. If the weather minimums don’t allow us to fly, we don’t go,” Scott explains.

The pilots decide whether to fly based solely on weather conditions. They aren’t given details about emergency calls, so the situations won’t sway their decisions. Heavy rain and dense fog? The rules dictate that flying is not permitted. But what if it’s an accident involving a busload of children? Since that information isn’t shared, the pilot isn’t tempted to risk a flight. The crew may be dispatched to the scene via MedStar’s two ground ambulances instead.

Still, the thought of administering first aid and assisting people with breathing problems while swooping through the air in a helicopter going an average of 140 miles per hour makes most people a little queasy. Not Scott.

“I’ve never gotten sick, but I’ve felt nauseated lots of times if it’s real bouncy,” she says. “It’s loud in there, and sometimes it’s dark, and the moving up and down makes it difficult. Let’s say you’re trying to set up an IV and hit an air pocket, or you’re drawing blood — that movement doesn’t have to be much, and it makes the job challenging.”

What Scott finds most stressful about her job is working in extreme weather: pouring rain, freezing cold and high heat.

One of the most memorable rescues in her six years with Northwest MedStar happened on a hot summer day.

The helicopter flew to an accident in Oregon’s Blue Mountains, landing on the highway. The crew walked a quarter of a mile to the scene carrying their 20-pound gear packs. (Police clear the road for helicopter landings, and Northwest MedStar crewmembers scrupulously follow “scene safety” procedures, like making sure no cars are driving around the police barricades as they exit the helicopter.)

When they arrived on the scene, they found a logging truck had flipped. The driver was trapped inside, on a hillside, with logs everywhere.

Ambulances, paramedics and EMTs arrived first, and were cutting the truck apart to extricate the driver.

“Sometimes they get there first, and they do a phenomenal job of helping people,” says Scott, “But some EMTs aren’t allowed to give medications or start an IV. We got the driver’s arm out of the truck window and started an IV. We gave him pain medication. I administered oxygen and monitored him to make sure he was OK. We’re standing on logs in 103-degree heat, and it took three hours to cut him out of the truck cab,” Scott said.

The most trying part of that rescue was the heat. Year-round, Northwest MedStar crew must wear heavy, fire-resistant Nomex fabric jumpsuits with T-shirts underneath, plus heavy socks and boots. Soon, she was overheating, as was the equipment. “We knew what we were going to do when we got him out: we were going to lay him down on a back-board, and that was burning hot because the sun was beating down on it, and we were trying to shade that as well as keep everyone hydrated,” she says.

Scott wasn’t always involved in emergency rescues. She worked as a respiratory therapist at Sacred Heart Medical Center for 17 years before moving to Northwest MedStar. Scott had the requisite two years of critical care experience to qualify for the flight crew, but she also had to become an EMT and earn Advanced Cardiac Life Support and Pediatric Advanced Lift Support certifications. Ongoing training keeps her skills fresh.

What appeals to Scott most is the autonomy and decision-making required. “You have to have confidence. It’s not like you’re in a hospital with a whole room of people to draw on for information and advice. You have to be more independent in this job because it’s you, your nurse and your protocol book,” she says.

Like the other people in emergency care, Scott admits to being a Type A personality: high energy, compulsively neat, and interested in taking charge.

“I think the majority of us are Type A, because we want things to go well. When I arrive on scene and have a trauma patient, I go through my ABCs [airway, breathing, circulation] and assess the patient, and then I do what needs to be done. You have to focus and take control of the situation and, if you’re calm, everybody else around you will stay calm,” Scott says.

“Wear a life jacket in boats. For motorcyclists, be visible and wear reflective gear. As for ATVs, “Stay off of them!” says Alison Scott, Northwest MedStar respiratory therapist. She adds, “Don’t drive if you start to get sleepy.” Several of the worst accidents Scott has seen in the past year involved drivers who fell asleep at the wheel.