All the Wrong Reasons

Sure, Nickelback's not everyone's cup of tea. But are they really the worst band in the world? 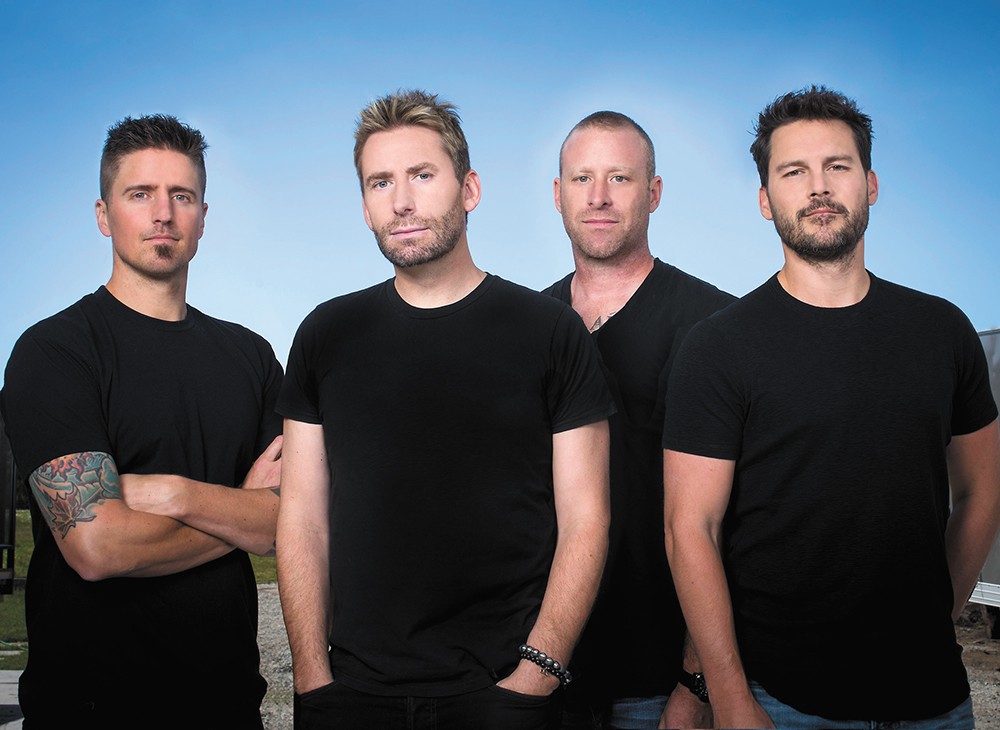 Nickelback: Appropriately despised, or is it overkill?

It's a truth universally acknowledged, one of the great uniting opinions in all of popular culture. Google "worst bands," and Nickelback comes up over and over again, outranking the likes of Creed, Insane Clown Posse and Good Charlotte.

What is it about Nickelback that makes them so hateable? Perhaps it's because they specialize in the kind of flavorless arena rock that sounds like it was shrink-wrapped right off the factory assembly line. Maybe it's because their frequent (and often repellent) references to sex, drugs and rock 'n' roll have all the authenticity of a kid repeating dirty words he's heard before, but doesn't understand.

The fact that frontman Chad Kroeger and company are relatively competent performers makes the music's lack of personality all the more apparent.

Even the band's name is stupid: Nickelback. Say it out loud and it almost sounds like you're choking on saliva.

There have been all kinds of memorable internet gimmicks taking the piss out of the band. Remember that pickle that tried (and succeeded) to get more Facebook fans than Nickelback? Or how about the mash-up that laid multiple Nickelback songs atop one another, proving that the band was shamelessly recycling its own riffs? We all had a good laugh at those.

But what if we're wrong? What if those genial rockers from western Canada aren't really as bad as everybody says?

Consider a routine by comedian Shane Torres that recently went viral. It starts off as a valiant defense of another similarly denigrated cultural figure — celebrity chef Guy Fieri.

"Because he's got flames on his shirt, everyone shits on him like he's a member of Nickelback," Torres says, to uproarious laughter.

That's a good question: How did they become the barometer by which we measure a band's awfulness?

"It's hard not to feel a little bad for Nickelback," Rolling Stone wrote in 2013, when its readers named Nickelback one of the worst bands of the '90s (never mind the fact that most people didn't even hear of them until the early 2000s). "Sure, they aren't the greatest band in the world, but people act like they make Nazi folk music or something."

The band itself doesn't seem to mind the fact that millions of people are scoffing at them. In a 2014 interview with the Canadian Press, Kroeger actually seemed to embrace the divisive nature of his band.

"I don't think that all the haters and the critics know how many [favors] that they've done for us," he said. "Everyone's like, 'I hate them' or 'I love them' — whatever it is, people are talking about us."

Nickelback has been active more than two decades, starting out as a cover band (originally called the Village Idiots) in their Alberta hometown, and they developed a grassroots fan base in the Vancouver hard rock scene before an American talent agent signed them in the late '90s. Their third LP, 2001's Silver Side Up (released on 9/11, it should be noted), was their mainstream breakthrough, and its lead single, the perfectly innocuous "How You Remind Me," skyrocketed to No. 1.

They've only scored a handful of other big singles — including "Photograph," with its hilariously stilted, frequently parodied lyrics — but each of the seven albums they've released since 2001 has cracked the Billboard Top 10. They've sold more than 50 million records worldwide, and they average more than 5 million monthly listeners on Spotify (to put that in perspective, legendary rock bands like Pink Floyd and Led Zeppelin average around 7 million).

And although the Spokane Arena doesn't disclose numbers until after their shows take place, I've been told that tickets for Tuesday's concert are moving quickly, and that anyone interested in attending the show should put their money down now. The idea that there's no such thing as Nickelback fans obviously isn't true.

Of course, popularity doesn't always equate to quality. Plenty of things that attract large groups of people are generally terrible — the Transformers movies, for instance, or going to IKEA on a weekend. But certainly, Nickelback's surprising popularity only makes them a larger target for derision. Do they deserve the scorn that's frequently heaped upon them? I don't think so.

Next time you're at a party and somebody inevitably starts the "Nickelback is the worst band of all time" routine, retort with one of these rock acts, all of which are more deserving of hate, I think, than poor, defenseless Nickelback:

Jared Leto's ego already has its own orbit, and I'd take Nickelback's comparatively down-to-earth approach over his preening rock-star act any day.

Fronted by former American Idol contestant Chris Daughtry, these Nickelback openers are far more bland than the big headliners. They're also prone to drippy sentimentality, which has no place in hard rock.

A Frankenstein's monster of the most execrable facets of country-pop, arena rock and hip-hop, this pretty-boy duo is so focus-grouped to within an inch of its life, it makes Nickelback sound like the height of authenticity.

Wannabe Michigan senator Robert James Ritchie has taken his dirtbag-chic aesthetic further than it should ever have been allowed to go. And every time his saccharine Lynyrd Skynyrd tribute "All Summer Long" comes on the radio, I'm tricked for a second into thinking it's Warren Zevon's far, far superior "Werewolves of London." How cruel.

Yep, they're still active, and yes, they're still unbelievably horrible. Nothing Nickelback has touched approaches the abysmal droning of "Nookie," "Rollin'" or, perhaps worst of all, their sacrilegious cover of George Michael's "Faith."

They were buddies with Limp Bizkit, so they're guilty by association. They're also known for frequently miming during their live performances, which I can't imagine Chad Kroeger would ever do.