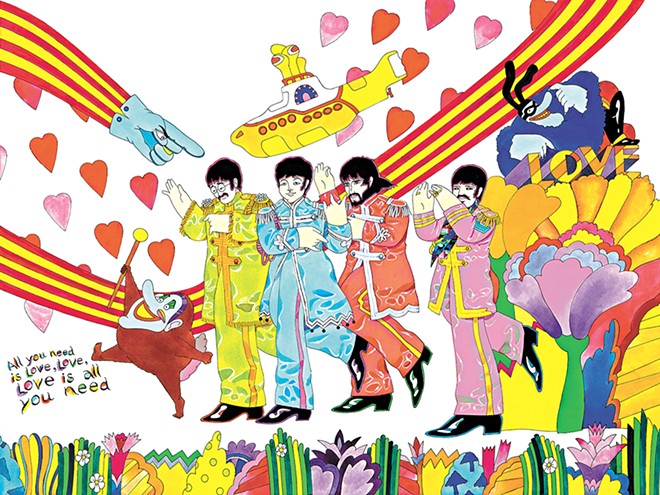 Name a classic Saturday morning cartoon from the past five or so decades,

and chances are good that an artist named Ron Campbell had a hand in bringing it to life on screen.

The Australian-born animator, now retired and living outside of Phoenix, drew panels for favorite series such as The Flintstones, Scooby-Doo, The Smurfs, The Jetsons, Ghostbusters, Winnie the Pooh, Darkwing Duck, Rugrats, and a long list of other titles. Campbell's former studio also created the Emmy-winning PBS children's series Big Blue Marble, and he directed the eponymous cartoon about the Beatles that aired in the U.S. from 1965 to 1969. To avid fans of the Fab Four, however, Campbell's most significant contribution to the art of two-dimensional animation may be his work on the Beatles' 1968 film Yellow Submarine.

"I can't tell you how many people I meet who are obsessed with the Beatles; it's absolutely amazing the effect they've had on people over the years!" Campbell remarks.

For the film that ultimately captured the artistic and cultural zeitgeist of the late 1960s — filled with the Beatles' mid- to late-career music and an endless stream of psychedelic, vividly colorful settings and characters — Campbell illustrated about 12 minutes total. For those who know Yellow Submarine's story, his work contributed to scenes featuring the Chief Blue Meanie and his sycophantic sidekick Max, the time-travel escapades in the "Sea of Time" and many moments that feature the rhyme-speaking Nowhere Man, aka Jeremy Hillary Boob, Ph.D.

Local fans of both classic cartoons and the Fab Four's underseas trip to Pepperland can see a collection of Campbell's art based on the many series he drew for during two pop-up art shows in the Inland Northwest, one in Spokane (May 2-3) and another in Coeur d'Alene (May 5-7). All artwork on display is for sale, and Campbell will paint and draw on site as he meets fans and talks about his illustrious career.

Some of Campbell's work

Though the 77-year-old artist is retired from the professional animation realm,

he now spends some of his days re-creating the many characters he drew for the screen, and travels around the country showcasing his art and meeting fans. Speaking on the phone a few weeks before his two Inland Northwest shows, Campbell reminisces about his storied career as a professional animator.

"When I look back, you know, on my life, I say, 'Hey, I got to work on some pretty nice stuff,' and I'm so proud of that," Campbell says. "But you must also remember that no one man was responsible for anything in the film. A lot of people work on these films. I'm not the only person."

Campbell got his start in animation when the genre had newly arrived in Australia, and began work in the late 1950s on early shows including Beetle Bailey, Krazy Kat and Popeye.

"I think it might have just been my luck of being born when I was, and being in the place that I was," he says, laughing.

But Campbell's love of animated pictures was born before he even understood how the films were made. He remembers going to his local movie theater for the children's programming special on Saturdays, featuring superhero serials, Roy Rogers adventures and cartoons.

"Cartoons, of all the programming on that Saturday afternoon, those were the most fascinating to me," he recalls. "I vividly remember going home one day and saying to my great-grandmother — I'd seen some Tom & Jerry and Heckle and Jeckle — and was saying how wonderful they were, but I couldn't figure out how the animals got up on the screen."

His grandmother set the 7-year-old Campbell straight, saying something like, "No, no, no, Ronnie! They're all drawings!"

This realization hit him like a "childish epiphany," and he remembers thinking, "You mean I can do drawings that come alive?!"

The inspiration sparked during that life-changing moment stuck with the young artist, and he later attended art school. It was his work in the late '50s as part of Australia's "first wave" of television animators, he says, that led to an offer from producer Al Brodax for Campbell to direct the American Beatles cartoon, and subsequently to contribute to Yellow Submarine.

Those projects propelled Campbell down a path that would see him working as a storyboarder for Hanna-Barbera, as a member of the team that created Scooby-Doo, and on to dozens of other classic '70s, '80s and '90s cartoons.

"All my life, the audience were numbers on a page — what were the ratings last night, or Saturday morning; they're just numbers," Campbell reflects. "But now that I'm retired, I have the great pleasure of actually meeting the people those numbers represented. ... I've been absolutely amazed at the affection people have for these stupid drawings. It's the same thing, when I was little and my grandmother told me they were just drawings — they're just drawings, yet people are in love with them." ♦