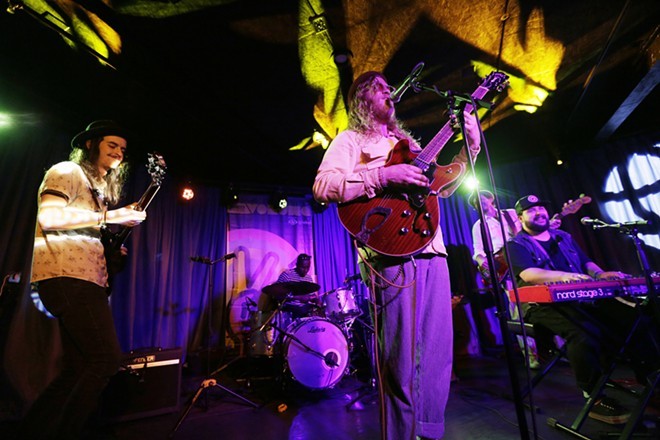 Young Kwak
Allen Stone performs with the Blake Braley Band at this year's Volume Music Festival.
Allen Stone has only played a handful of local shows since he moved back to Spokane, but his next gig is one for a good cause: The R&B crooner is set to headline a Sept. 9 concert at Arbor Crest Wine Cellars (4705 N. Fruit Hill Rd.), and proceeds will benefit the Northwest Parkinson's Foundation.

General admission for the event runs $50, and VIP tickets — which include drink tickets and a meet-and-greet with the musicians — are going for $125. The music starts at 5 pm with back-to-back opening sets by the bluegrass-country outfit Buck99 and jazz group 4'derves.
Stone, originally from Chewelah,  recently wrapped up an extensive nationwide tour, both as a headliner and as support for Train and the Goo Goo Dolls. He spoke to the Inlander last year about his new music and future plans, and also popped up to play along with the Blake Braley Band during our most recent Volume Musical Festival.

You can purchase tickets to the Sept. 9 event here, where you can also pre-pay for the food that will be on site, and make standalone donations to the NW Parkinson's Foundation.