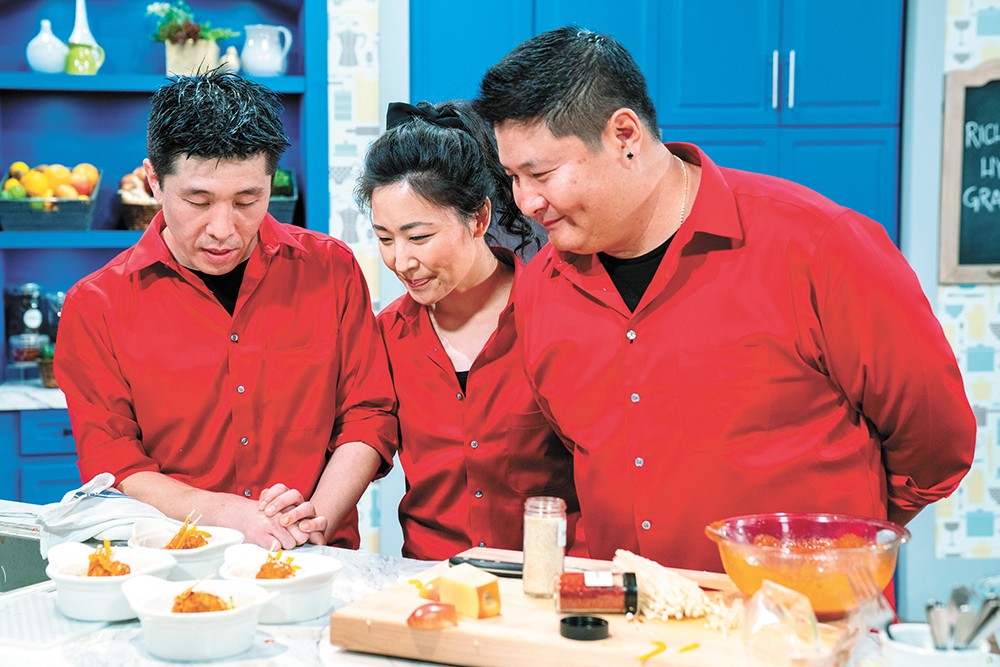 The Inland Northwest continues to be a wellspring of culinary talent for the Food Network, which recently tapped the Son family of Coeur d'Alene's Momo Sushi.Wok.Grill for its new series, Family Food Showdown. When the network called, Grace McNiel thought it was a joke. She runs Momo with husband Scott McNiel and brother Hyun Son, serving pan-Asian food including favorites from the Son family's upbringing, like Korean bibimbap, Thai coconut curry and Chinese kung pao stir-fry. Grace, Hyun and a third brother, Richard Son, who runs a similar Momo restaurant in Colorado, competed on episode three of the show, a potentially hilarious hybrid of Chopped meets Family Feud.

Vying against them were the Lococos, a second-generation restaurant family from Northern California whose specialty is Italian food. When host Valerie Bertinelli challenged the teams to come up with tacos, over-the-top stuffed masterpieces and noodle dishes, the Sons responded with twists to traditional Korean dishes they grew up with: Korean tacos, crispy fish and sashimi with a spicy cold noodle dish called bibing nengmyun.

"When you're forced to work with a pantry and fridge someone else stocked for you and asked to create a phenomenal dish within minutes for a $10,000 cash prize, your adrenaline skyrockets instantly," says Grace. "It was stressful, but there were some deep moments between us that we wouldn't have made the time for in our busy restaurant lives. It was a beautiful experience for us as a family."

The downtown brewery and popular taco spot are teaming up for a special beer dinner on Sunday, April 7, at 6 pm. For $69 (tax and gratuity not included), guests are treated to a six-course meal by Cochinito chef Travis Dickinson, each featuring a specially selected beer pairing from Iron Goat Brewing. Highlights of the menu include a corned beef torta with Oaxaca cheese and Thousand Island-creamed Brussels sprouts, paired with Iron Goat's new seasonal Irish Kate, an imperial red ale. For course five, the brewery's signature Goatmeal Stout is paired with a pancetta porchetta, smoked blackberry mole, sweet grits, chanterelle mushroom and braised leeks. To cap off the meal, a passion fruit and guava sour is served with an almond tres leches, guava caramel, coconut and candied hibiscus. Call Cochinito at 474-9618 for reservations. (CHEY SCOTT) ♦