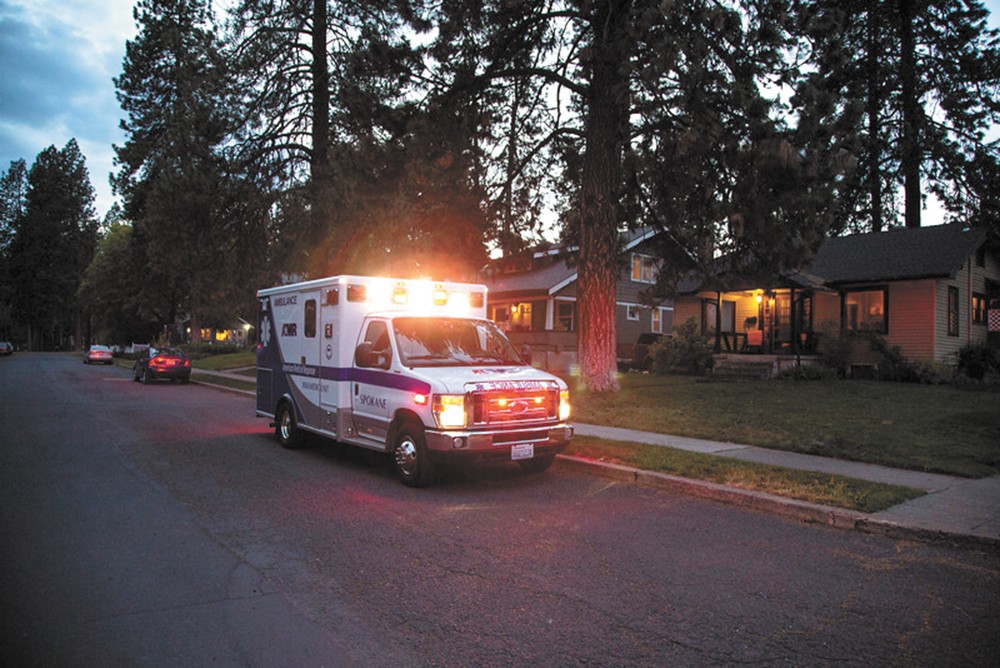 The company's current contract in Spokane is up this fall, so the fire department recently issued a request for bids from ambulance companies across the country. After AMR was the only company to respond and a competitor told the city why it didn't bid, some city councilmembers are calling for a do-over.

According to ambulance company Falck, one short phrase in the request language unfairly kept them out of the process: "within the United States."

"By inserting this wording into the request for bid, you essentially excluded the single most qualified entity in the world," Falck Northwest CEO Michael Collins says in a letter to the city.

Among the many requirements for any company applying to take over ambulance service in Spokane is that it has provided advanced life support service to an American city of at least 150,000. Falck, while a major international provider, doesn't meet that requirement. The company provides basic life support to large American areas like Los Angeles County and advanced care to cities around the globe, but no advanced care to a large American city. Falck's Collins says the company's experience, and $3 billion value, should speak for itself.

"It's about putting the most qualified ... personnel on the scene in the shortest amount of time in the best interest of the patient," he says. "Geography really doesn't play into that."

A city council committee meeting grew tense last week as the fire department defended its process, while some councilmembers said the language — a new addition from the last time this process took place in 2003 — seemed tailor-made to favor AMR.

"One of the biggest criticisms we get as a government is handing out sole-source contracts or contracts that seem to be designed to go to a single source," said Councilman Jon Snyder, chair of the council's Public Safety Committee. "It never looks good; the public is never happy with it."

"[The new language] was not to eliminate," Williams told the council. "It was to protect the community."

And while it may not be ideal, it's not uncommon to see only one bidder, they say. Mike Lopez, a former AMR employee recently hired to oversee emergency medical services for the department, says that on top of infrastructure costs to start operating in a new city, Spokane's high number of Medicaid- and Medicare-eligible patients could drive away possible AMR competitors because of low reimbursement rates.

"Some of the bigger companies probably looked at it and said, 'I don't know that we can make it in that environment,'" Lopez says.

The council ultimately will decide

on whether to approve a new contract with AMR, and some have said they won't do so unless the administration restarts the request-for-bids process.

The clash pits a fire department administration that's worked with AMR for decades and now has hired a former AMR employee against both a labor union that's interested in someday taking ambulance transport back from the private sector and city councilmembers who've seen significant backing from that union in recent elections.

"The only advantage we see in having a private company doing transport is that it's competitive for citizens," says Spokane Firefighters Union President Don Waller. "If you have only one person bidding, you're not getting that."

Add that on top of an already touchy discussion. Beginning in 2005, AMR faced criticism for overcharging citizens and insurance companies by more than $300,000. Two years later, as a class-action lawsuit about the overbilling was ongoing, then-Mayor Dennis Hession's son got a job as a paramedic with AMR. Now, nationwide, ambulance companies face financial woes as some have abruptly shut down operations with little warning to local communities.

"This thing has a troubled history," Snyder tells the Inlander. "When there's history on something like that, sometimes appearance is important."

According to fire department officials, this bid process is nothing newsworthy. In addition to the unique demands of a city, they argue, the requirement for major American experience is essential in the modern era.

"Globalization wasn't discussed in 2003," Schaeffer says. "We didn't have companies from around the globe ... doing business in the U.S., we didn't have the Affordable Care Act, we didn't have all the regulations and rules we have today."

If Falck, the company that criticized the request language, had concerns, fire officials say, the company should have raised them before the process was over.

"It's about fairness to taxpayers," he says, "not locking taxpayers into one provider." ♦

In the background of conflict over ambulance service, the Spokane Firefighters union continues to call into question the hiring of Mike Lopez, who was appointed this spring to oversee city EMS operations. Lopez spent two decades at AMR before his most recent job at the state Department of Health.

Lopez was offered his $80,555-a-year position — Assistant Director of Integrated Medical Services, a new addition to the department when it was reorganized as a division last year — just before a judge ruled in April that such a reorganization was unlawful. (The city has since appealed.)

The union brought the legal challenge to the reorganization and is now accusing the department of failing to get needed city council approval before moving money around to fund Lopez's position. According to city law, departments can transfer money to fund new positions without council approval if the new job is a downgrade from an earlier civil service classification. The city administration says the new position Lopez is filling is a step down from the position it replaced. The union argues that since Lopez's new position is exempt, meaning it's filled entirely outside of civil service, it needed council action.

The union has filed complaints about the process to the state auditor and city prosecutor.