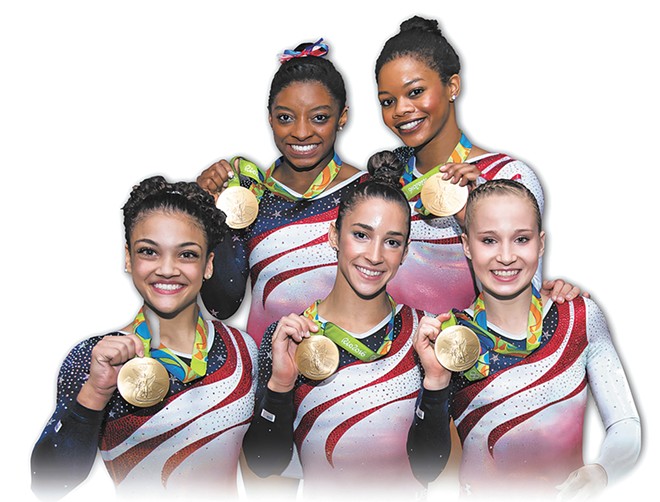 From Rio to Spokane,

next up for the U.S. women's gymnastic team is an energetic tour across the country to show off their gold medal winning skills.

Kicking off on Sept. 15 at the Spokane Arena, the Kellogg's Tour of Gymnastics Champions offers a sampling of the Olympians' high-flying skills in an exhibition-style format reminiscent of Cirque du Soleil's flashy, acrobatic shows.

Because of its format, spectators shouldn't expect to see the formulaic, skills-packed competition routines for each of the sport's apparatus. Instead, for this show gymnasts perform lively, choreographed routines to upbeat music, using the beam, bars, vault, rings and floor, along with aerial hoops, silks and other implements. During some moments, multiple athletes might be on the same apparatus.

"It's so far from being a competition; it's just designed to be a crowd-pleaser," says Steve Penny, president of USA Gymnastics, which serves as the national governing body for the sport.

Scheduled every four years after each Olympic Games, the tour's previous stop in Spokane was back in 2008, and before that in 2004. Penny says that because of the athletes' whirlwind post-Games media tours, they meet to learn and practice their roles just weeks before the show, which will stop in 35 other cities after launching in Spokane.

"They're quick studies — they know what to expect and how to pull routines together," Penny says. "Once they get to rehearsal, they just see what they need to do and pick it up really quick."

After winning a combined total of 13 medals (eight gold) between them, most of the Final Five, as they nicknamed themselves, haven't announced their future plans in the sport. Uneven bars silver medalist Madison Kocian plans to head to UCLA, where she'll compete on the school's Pac-12 gymnastics team. While both Biles and Hernandez are considered "young" team members and could likely each compete in a second Olympics in Tokyo in 2020, neither have announced their future plans on that front, and understandably so. After meeting every expectation that their coaches, fans and they themselves had in Rio, it's time for these gravity-defying women to relax and enjoy the fruits of their labor — starting with the kickoff of the champions tour in Spokane next week. ♦

Stars of the Tour of Gymnastics Champions