Around St. Patrick's Day, the world wises up to Irish music once more 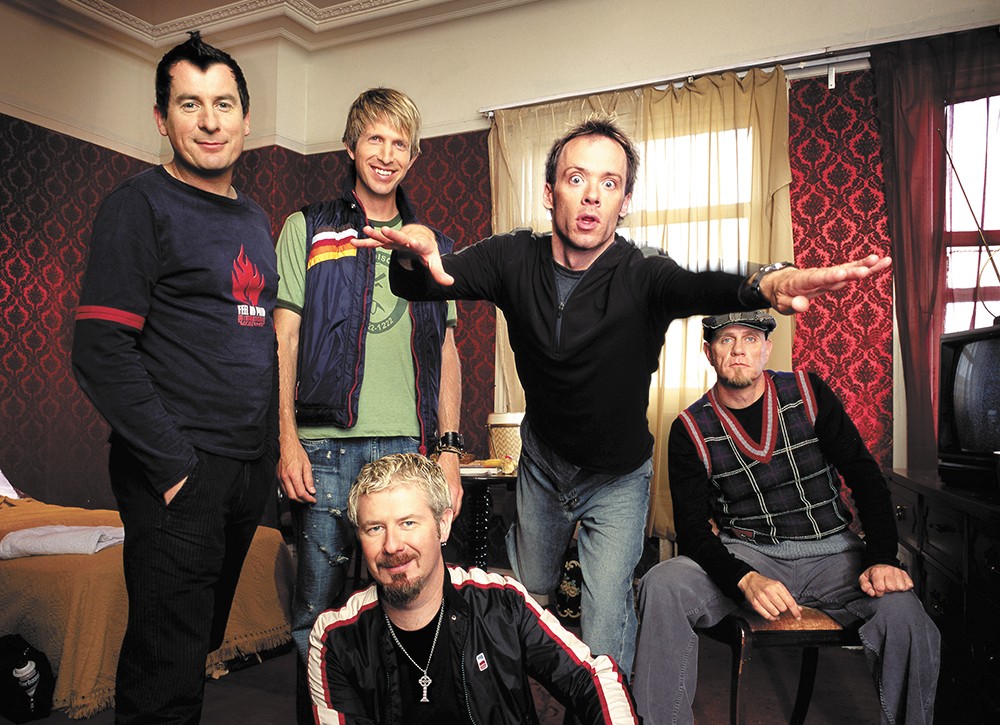 Young Dubliners get wild at the Knitting Factory this weekend.

, the fiddler wails, the banjo player picks seemingly faster and faster. You can barely see the musicians stuffed into the corner of the bar, yet Floating Crowbar provides the perfect Irish songs during last year's Saturday-before-St. Patrick's Day festivities. Every stool and chair is filled with loudmouthed people in orange and green apparel and the Guinness is flowing. Inside Hills' Restaurant, customers can't help but clap along to the captivating folk music, especially when two dark-haired female Irish dancers pound their feet along with the rhythms.

This is the kind of scene local Irish bands — like Floating Crowbar, An Dochas and teen group Broken Whistle — can expect from February through April when they're called upon to play every Irish event around town, as their schedule allows.

National Irish acts cash in on this phenomenon as well. The Knitting Factory has gotten into the Celtic spirit in the past few months, bringing in Dropkick Murphys and Flogging Molly. This weekend, the Young Dubliners plan to ravage the joint with their mix of alt-rock and Irish folk music as part of their pre-St. Patty's Day tour.

It's tough being the only sober people in the room

on St. Patrick's Day, but that's what Young Dubliners lead singer Keith Roberts is used to enduring. His band won't get through the day if they don't keep clear minds.

"Last year, we played L.A. and then immediately flew to Lake Tahoe for a show," recalls Roberts, phoning in from Alaska. "I didn't get back to the hotel to order room service until 2:30 in the morning. That steak tasted so good."

This year, they're "slowing it down," playing just one gig in Tucson, Arizona. It also helps that the holiday falls on a Tuesday, when people tend not to get as wild.

A native of a Dublin suburb, he says it's the Americans who've turned the green holiday into the Irish Car Bomb-fueled shit-show it is now. For him, it was just another day off school to scrounge up some trouble with buddies. When he moved to Los Angeles as a 21-year-old in the late 1980s, he realized the four Irish traditional songs he knew how to play on guitar could pull in serious money around St. Patrick's Day — his first show raking in more than $200 in tips. Soon, after his dream of a journalism career became a nonstarter, the idea for the Young Dubliners (and owning a pub) came to light.

Initially, all Roberts wanted to do was open a bar in Santa Monica where his group could easily play. The band turned out to be more successful than the bar. In the beginning, there were packed-out late-night shows; things were broken and many three-minute pub songs were written. Often, Flogging Molly would open up for them.

Three decades later, Roberts admits they've finally hammered out their blend of contemporary and traditional music — he attributes this to the sound of electric guitar and fiddle playing in unison. This is a big year for the band, as three of them are now in their 50s.

"There's some mental issues with that," Roberts says with a laugh. "But we've stayed in that youthful mind-set."

While touring incessantly can cause fatigue, Roberts says they wouldn't miss playing this time of year for the world. Local Irish acts share that same sentiment.

Rick Rubin has made music

with Floating Crowbar for five years, but he's played Irish music for more than a decade in the area.

"It's fun, it just gets a little wacky," says Rubin of St. Patrick's Day. "You have to remember to be compassionate, that on that day people just want to express themselves."

He recalls one year a teetering audience member told him to smile more while he played on stage. As soon as he gave in with a cheesy grin, she fell over sideways in a drunken stupor.

"Now I can look back and laugh about it," says Rubin, who is of Scotch heritage. "But that was kind of a scary moment. We haven't had any issues at Hills', for which I'm appreciative of."

People are always looking for an excuse to party, but the holiday can be a family-friendly experience too, with many Irish celebrations and Catholic gatherings occurring around this time of year.

"There's a lot of people around here who are very proudly Irish," Rubin says. "This is the perfect time for them — and people who aren't Irish, for that matter — to get in touch with that heritage by listening to this beautiful type of music." ♦