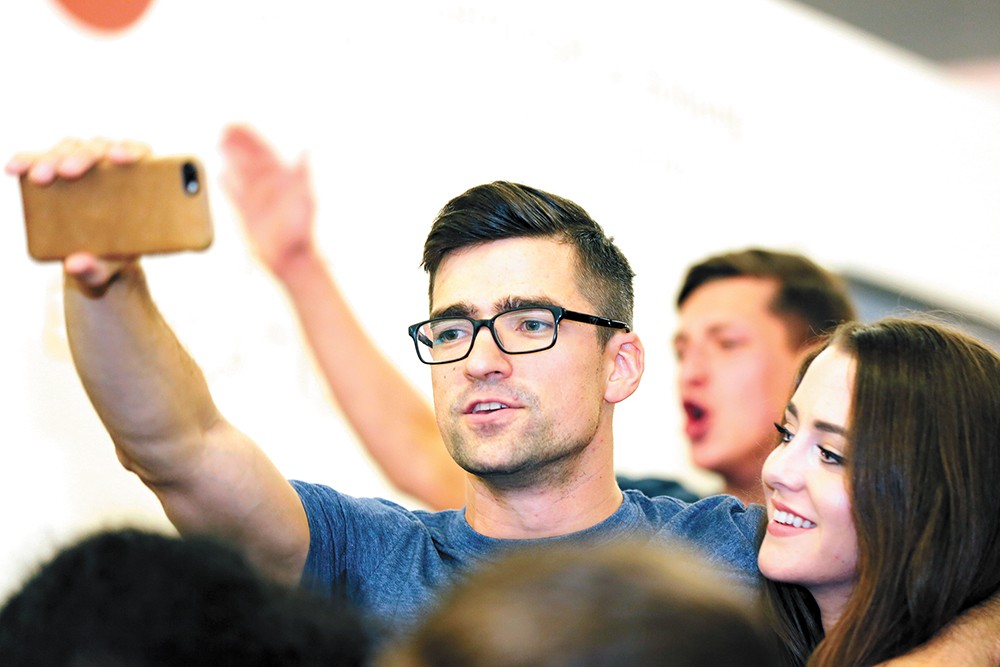 Until recently, Brittany Pettibone was best known as one of the "leading authorities" on Pizzagate — the debunked conspiracy theory that went viral in 2016 claiming that high-profile Democrats were running a satantic child sex trafficking ring out of — yes — a pizzeria in Washington, D.C.

"I've become known for [being] one of the many people investigating Pizzagate," Pettibone, then 24, told an alt-right podcast host in late 2016. "Many people have a reason to believe that [the pizza shop] is potentially a front for a child trafficking pedophile ring."

The conspiracy that she helped peddle eventually resulted in violence: A Pizzagate believer fired a rifle inside the pizzeria while investigating the nonexistent racket. Pettibone, meanwhile, would go on to generate a sizeable following as an alt-right figure on YouTube.

Three years later, Pettibone, who now lives in Post Falls, appeared before the Kootenai County Republican Central Committee on April 25 to make her case that her Austrian fiance, Martin Sellner, is being unfairly persecuted by federal officials when they blocked him from travelling to the U.S., where he intends to marry Pettibone.

Sellner, 30, a former neo-Nazi and current right-wing anti-immgration activist in Europe, is being investigated by Austrian authorities for ties to the mass murderer who recently shot up two mosques in Christchurch, New Zealand. (Sellner reportedly received a roughly $1,700 donation from the shooter and communicated with him via email prior to the massacre, per the Associated Press.)

"It's just a case of political persecution," Pettibone said at the meeting.

The Republican committee — which includes prominent local officials such as Kootenai County Prosecutor Barry McHugh — rallied behind her cause and approved a resolution calling on the federal government to allow Sellner into the U.S. But the action quickly garnered local and national media coverage and prompted criticism from regional Democrats and some Republicans who argue that the vote serves as an endorsement of bigoted and fringe right-wing thinking.

"As a political organization, if you come forward in support of an individual, by default, you are claiming to support what that individual stands for," says Laura Tenneson, a precinct chair with the Kootenai County Democrats. "It's racism in disguise."

"I know a lot of Republicans who are upset about it," says Deborah Rose, a member of the Kootenai County Republican Central Committee who abstained from the vote on the resolution. "Martin Sellner is a self-proclaimed ex-neo-Nazi and I'm not so sure that that mentality isn't still influencing his decisions today."

Critics point to the political views and activities of Sellner and Pettibone as cause for outrage. Sellner is a key figure in Generation Identity, an aggressive pan-European activist group of millennials that advocates for ethnic homogeneity in European nations, severely limiting immigration — with an emphasis on Muslims — and stopping the supposed "Islamization of Europe." He calls himself an "identitarian" in videos and rejects labels such as white supremacist. He also helped orchestrate the controversial "Defend Europe" action where right-wing activists chartered a boat in the Mediterranean to stalk humanitarian vessels aiding migrants at sea.

Similarly, Pettibone, who described herself as a "Catholic American nationalist" before the Kootenai County Republican Committee, wants a "full stop on mass immigration" because it jeopardizes the "security and identity of a country" and that "it's impossible for immigrants entering in massive numbers to assimilate," per a recent video she posted. Both individuals were refused entry to the United Kingdom last year for their right-wing activism.

While Sellner and Pettibone profess to be nonviolent and not racist, they also endorse the Great Replacement theory, a conspiracy trafficked in right-wing circles that white people face an existential threat due to immigration and white women not producing enough children. (The Christchurch shooter was a believer in the theory, authoring a manifesto titled "The Great Replacement" prior to the massacre.)

Marilyn Mayo, a senior research fellow at the Anti-Defamation League's Center on Extremism, says that Pettibone and Sellner traffic in white nationalist ideas without explicitly coming out and saying so: "They want to stop all nonwhite immigration. They're usually Islamaphobic," she tells the Inlander. "They're very careful about how they voice those ideas."

"'Identitarianism' is another way of promoting white nationalism," she adds. "They're not explicitly white supremacists but they share [many of] the same views."

Chris Fillios, a Republican member of the Kootenai County Board of Commissioners, says that concern with Sellner is warranted.

"If you look at Sellner's activities and a lot of the things he has said and proclaimed, there is reason to be concerned," he says. "The whole white nationalist movement is something that is somewhat on the march globally and also within the U.S."

The U.S. Department of Homeland Security did not respond to a request for comment regarding the status of Sellner's admission to the U.S.

Brent Regan, chair of the Kootenai County Republican Central Committee, writes in a statement to the Inlander that the group was "approached" with a last-minute request to let Pettibone address the committee as a constituent and that the group was concerned with free speech issues: "What we knew at the time was that she was a constituent, a Republican and had an issue with the U.S. government," Regan writes. "The Kootenai County Republican Central Committee firmly believes all citizens have the right to petition their government for redress."

He adds that the committee "condemns all forms of racism and bigotry."

A staffer for Congressman Russ Fulcher (R-Idaho) was also present at the meeting where the committee approved the resolution and offered to provide assistance to Pettibone. In an emailed statement, Alexah Rogge, a spokeswoman for Fulcher, argues that his staff's "natural inclination" is to help constituents in his district. "It is not the policy of our office to investigate the religious, political, or social views of our constituents when they come to us asking for help with a federal agency," she writes. "Congressman Fulcher does not follow the political activities of Ms. Pettibone and does not condone hate of any kind."

Barry McHugh, the Kootenai County prosecutor and a member of the committee who voted for the resolution, writes in an email to the Inlander that the group did not have enough information about Pettibone and Sellner when they cast their votes.

"We also were not made aware of information subsequently reported, and if the committee had been fully informed I believe a different discussion, and perhaps a different vote, would have occurred," he writes. "Because of the incomplete information provided, support for the resolution should not be considered to be tacit approval of their political views."

Tenneson, with Kootenai County Democrats, says that the vote is indicative of the current heavy conservative tilt of county Republicans under Regan's leadership: "We're no longer seeing the voices of the moderate Republicans. We're seeing more extremist views."

Rose, the committee member who abstained from the resolution vote, says that "key members in the committee" share the views of Pettibone and Sellner: "I would say they definitely endorse Pettibone's and Sellner's perspective or objective."

When contacted for comment, Pettibone provided a video responding to the controversy in which she criticized the media for misrepresenting the positions of Sellner, herself and the Kootenai County Republicans: "These deceit peddlers are going to lie about me either way because they have zero concern for the truth."

In his own rebuttal, Regan doubled down. In a May 1 op-ed penned in the Coeur d'Alene Press, he slammed the media for its "rabidly intolerant practice of guilt by proximity" and framed the backlash as a trampling of free speech.

Rose says the tactic is a deflection: "He's trying to divert what the real issue is and attempting to make it a freedom of speech issue but that's not what this is about."

Shawn Keenan, head of the Kootenai County Democrats Club, points to the white supremacist group Aryan Nations history in North Idaho as cause to be alarmed by local Republicans associating with Pettibone and Sellner.