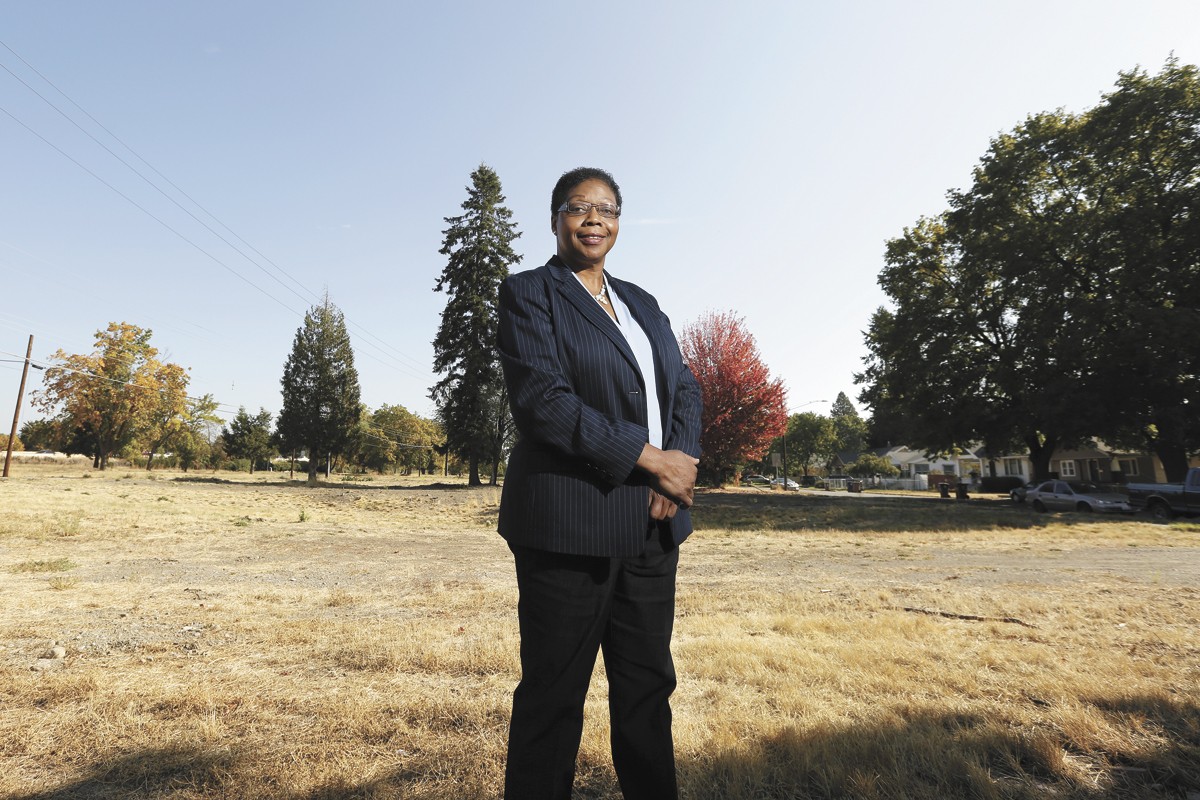 Young Kwak photo
City Councilwoman Betsy Wilkerson would like to see new development in this part of East Central to "increase the vibrancy of this neighborhood."

Spokane City Councilwoman Betsy Wilkerson stands in a 12-acre lot across from Sheridan Elementary school in the East Central neighborhood of Spokane. Other than the constant hum of freeway noise, this is a prime location for development: It's directly across the street from a school, a block or two away from Fred Meyer, and it's immediately accessible to the I-90 interstate freeway.

Indeed, when Wilkerson grew up in East Central, she recalls, there were single-family homes here — affordable and attainable housing owned by blue-collar workers employed at places like Kaiser Aluminum.

"This is one of the few neighborhoods that has paved alleys," Wilkerson says.

The alleys are still here. But the fences and houses have long ago disappeared. Other than the alleys, a few towering trees and brush, these blocks are a wide stretch of nothing in the middle of a city.

Wilkerson wants that to change: She wants to not just bring back the single-family homes, but add multifamily complexes, retail shops and other assets that "increase the vibrancy of this neighborhood."

But right now, these lots can't be developed — at least, not yet. They're owned by the state of Washington. Over the last 15 years, the Washington Department of Transportation has been gobbling up vast tracts of land like these along I-90 in the East Central neighborhood, preparing for a time when the North Spokane Corridor would finally connect with the interstate freeway.

For a decade, the freeway design called for constructing additional roads running parallel to the north and south of I-90, intending to allow North Spokane Corridor traffic to seamlessly merge with the interstate. The combined freeway, on-and-off ramps and side roads would have stretched across 19 lanes of asphalt at some points at East Central.

But that plan was abandoned. It was too expensive. So in 2015, the Department of Transportation changed course, shifting to a more modest and traditional design. That means that, theoretically, the state could release large swaths of East Central land for other uses, like affordable housing or public park spaces.

The department says it's been partnering with local community members — and even Washington State University architectural students — to explore how to use that land.

"That they are willing to acknowledge that they don't need the land and that they're willing to reinvest back in the community is probably the biggest hope I've seen around housing stock in this neighborhood in a long time," Wilkerson says.

But while Councilwoman Lori Kinnear share's Wilkerson's excitement about the potential, she's frustrated by the delay.

Looking at the desperate need for more housing in Spokane, she's "frothing at the mouth about this right now," she says, stressing the difficulty of getting clear answers from the state about when that land will be available.

"Now we just sit and wait? In the meantime, this neighborhood has been decimated," Kinnear says. "We lack buildable land for affordable housing, and here these lots sit and nothing is being done."

ROAD TO RUIN
The last time a new highway came to East Central, it practically destroyed the neighborhood.

Historically, the area had the highest concentration of Black residents in Spokane. That fact didn't just color how the neighborhood was seen; it shaped its fate.

In 1937, the federal government's Home Owners' Loan Corporation, for example, immortalized the views of local real estate agents and banks by giving the East Central area of Spokane just west of Liberty Park an incredibly low "red" rating, penalizing the region for the "melting pot of Spokane" and lamenting that even the nicer areas suffered "proximity to largest negro concentration of the city."

This practice, known as "red-lining," effectively made housing discrimination a federal policy.

"We couldn't buy a house in South Hill because of color," longtime East Central neighborhood resident Tommy Fletcher said in a 2014 recorded oral history interview posted on the Spokane Historical website. "That went on for many years."

So in the late 1950s, when planners had to decide where to plop down the new Interstate 90 freeway, nobody was surprised they ran it right through the middle of East Central.

Homes in its path were demolished. The northern part of the neighborhood was cut off from services. Neighborhood businesses, starved of traffic, shuttered their doors. An enormous chasm divided the community.

The Department of Transportation is well aware of the history. So this time, the agency's community partnership director, Charlene Kay, says the department has sought out leaders in local neighborhoods to sketch out how the North Spokane Corridor might look. It wasn't just about the roads — it was about bike trails, pedestrian crossings and other public spaces.

"We're seeking community input on where to site those locations, and what should happen at the end of those crossings," Kay says. There could be parks, amphitheaters or even outdoor food courts.

Wilkerson gives the state credit for reaching out.

"They came to us at the beginning. I think that's pretty powerful for the neighborhood to be invited in first," Wilkerson says. "I think that just shows their commitment."

But she also believes that the loss of housing in the neighborhood over the years has exacerbated the housing crisis.

And Kinnear suggests that, with the North Spokane Corridor project, the department risks repeating history.

"At this point, nothing is being delayed. I think everything is full speed ahead."

AVAILABILITY PENDING
Still, with the possibility that the community could turn some of the land freed up by the changes to the North Spokane Corridor plan into housing, Kinnear sees a huge opportunity. But she's frustrated that the state hasn't yet determined which portions of the property could be redeveloped.

"Everything is just hanging out there," she says. "We don't have answers and we're not given answers."

The Inlander pressed the Department of Transportation on a simple question: With the changes to the freeway design, how much of the state-owned land in East Central was potentially available for other uses? The department declined to provide an answer.

However, they did give the Inlander a rough map of potentially available properties — including three large areas to the north and east of Fred Meyer and a third strip near Liberty Park. In total, there are nearly 30 acres, over one-third the size of the transformative Kendall Yards development near downtown Spokane.

But the transportation officials caution that some of that land might be used for bicycle and pedestrian trails, stormwater improvements or other changes. Even though parts of the North Spokane Corridor have been under construction since 2001, the project's final design still hasn't been completed. Instead, it's moving forward in stages.

"At this point, nothing is being delayed," says Washington state Senate Majority Leader Andy Billig, D-Spokane. "I think everything is full speed ahead."

But in this climate, uncertainties still abound. Highway projects are primarily funded by gas taxes, Billig says. But in most years, they've also been partially funded by car tab revenues. Thanks to less driving during the pandemic, however, gas tax revenue is down. And if the $30-car-tab Initiative 976 is upheld by the courts, the state would see another transportation revenue stream plummet.

Some transportation projects might be pared back, while others could be delayed.

But even at full-speed, the department won't start advertising for the firm to finalize the design for the East Central portion of the project until 2023, says North Spokane Corridor design project engineer Bob Hilmes.

"After a six-month delay, they'll start working in design for certain areas," Hilmes says. "Once that's done, they'll release those for construction. At that point, we'll have an indication as to what's truly available or not."

But Kinnear still wants more clarity and feels she's not getting it.

"I look at this and I say, 'This is an opportunity,'" Kinnear says. "But we can't do anything unless we get cooperation from the state."

FINAL PROJECT
Randy McGlenn, chair of the East Central Neighborhood Council, supports waiting until the details of the project are nailed down before making any big plans.

"We shouldn't run through that prospect until we really see the project really come to fruition and really start to see it unfold," McGlenn says. "Between now and then, a number of things can change."

While the neighborhood is waiting over the next three years for the details to be finalized, Kay, Transportation's community partnership director, says there's plenty of time to draw up potential plans for the area. It's not just neighborhood activists and council members who are interested, she notes.

Ayad Rahmani, an architectural professor at Washington State University, has tasked his fourth-year architecture students to do just that this semester. His students have spent the last few weeks digging into the tumultuous history of the region, before drawing up plans for the three of the state's "potentially available" East Central properties.

Jhoana Hernandez-Avante, a student in Rahmani's class, talks about her ambition to design a walkable neighborhood where the neighbors can really mingle and get to know each other.

In her mind, that means not just adding denser development, but also adding in retail, community spaces like a library or a Boys and Girls Club. It means solving problems like highway noise by putting up barriers or vegetation.

All this energy gives Councilwoman Wilkerson a sense of optimism. While she shares some of Kinnear's irritation with the slow rate of bureaucracy, she believes the transportation department "sincerely wants to partner with the city and the community to bring this neighborhood back." ♦