Among the numerous earth-forward design features in what Kundig calls the Rimrock House is the location of the house itself, especially how it honors and communes with the surrounding landscape, the critters who inhabit that landscape and the extraordinary humans who hail from the Inland Northwest.

"The property was historically a game trail, leading from the upper forest and cliff through a gap to a path where animals could get down to the [Spokane] river," says Kundig, an owner and principal at the Seattle-based firm of Olson Kundig. "It's been an important passageway for hundreds, maybe thousands, of years, so keeping it as intact as possible was an explicit agenda from day one."

To do that, Kundig designed the 5,200-square-foot home in a "T" shape to complement the natural features of the "rimrock" — defined as a rock wall above a plateau or canyon — overlooking the Spokane River. 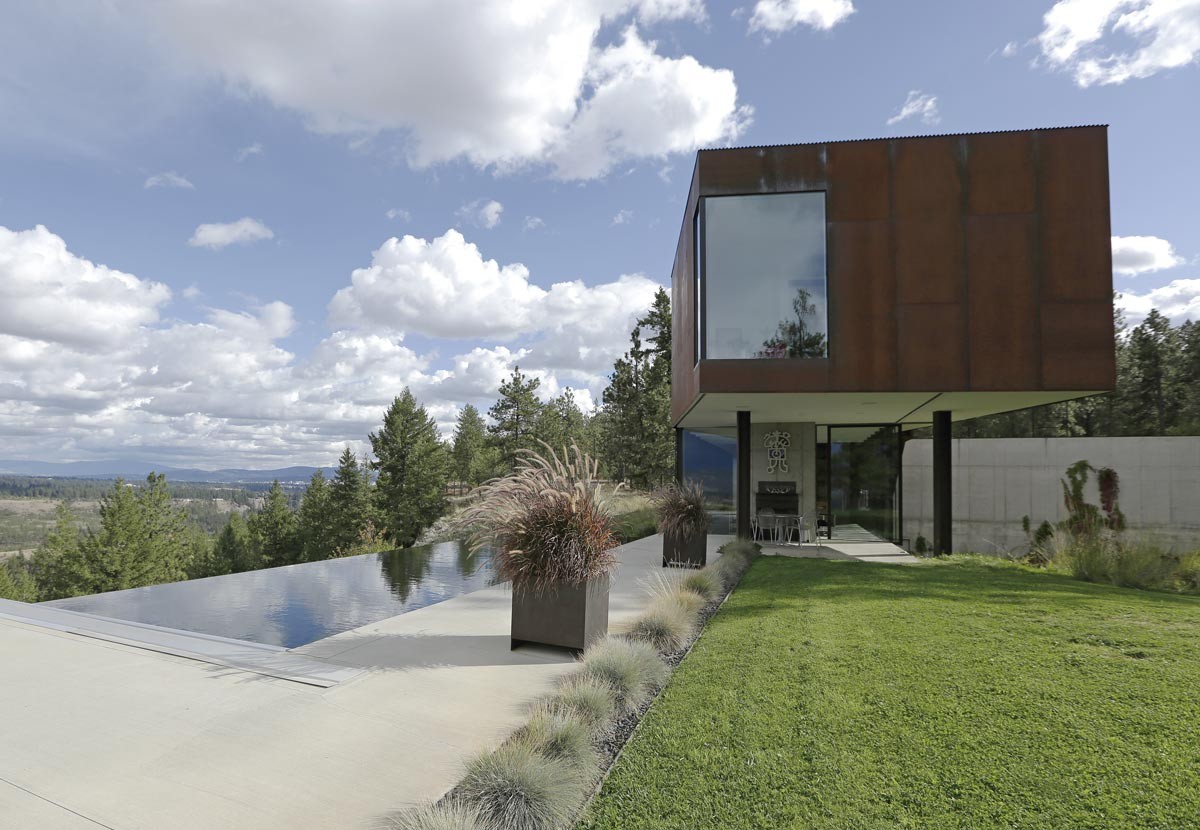 Young Kwak photo
An infinity edge pool reflects clouds floating by along the cliff's edge perch of the Rimrock House.

The portion of the home that contains the three-car garage sits on top of one side of a small, gently-sloping gully on the rim of the cliff while the body of the home adjoins the garage portion, forming the "T" and spanning the same gully. The "gap" allows for wildlife to continue to pass through the area, going under the home, just as they always have. Owner Paul Mack says he and his wife Suzanne have observed cougars hunting deer on the home's 20 acres, and a moose and two calves were once spotted cozied up near the house.

Creating the home was a lengthy process, running to 22 months. "Everything is custom," laughs Paul, "Everything." Just acquiring the property entailed a protracted negotiation process lasting nine months. "Every day I'd come home and Suzanne would say, 'You didn't lose that did you?"

He didn't, and slowly the house took shape. Rimrock features carefully sourced materials, including the 90-95 percent reclaimed steel paneling for the exterior of the home that the Macks sourced locally. The metal, says Kundig, is durable and low maintenance. "Rather than using a material that takes on nature in a sort of defiant way, the metal is more soft, in a sense," he says. "It embraces the way nature changes, in the same way that we age and change." Paul puts it more succinctly, "It rusts," slowly developing a hue that perfectly complements a vast blue sky. Likewise, he says the growth of native vegetation in the years since the home was completed have brought it seemingly closer to the land.

Heading up the walkway through a swirl of silvery grasses, a Harold Balazs steel sculpture perches above a narrow rectangular reflecting pool, greeting visitors to Rimrock and leading the eye to an audaciously bright red front entry door.

Once inside, a perhaps surprisingly modest vestibule is flanked by a set of sliding carved wooden doors, also by Balazs and of reclaimed material, which serve as a fully functioning gateway to the home's secondary bedrooms. Throughout the home, Kundig's and the Macks' affinity for Harold Balazs — both the artist and his work — is on full view, even including a work Balazs created on the lid of a washing machine, a work that appropriately hangs in the laundry room.

"I think some of my favorite features are the ways that the house embraces [Balazs'] art, and the design makes those pieces important within the building," says Kundig, whom Balazs mentored for several summers when he was a young man, inspiring Kundig's approach to materials and instilling in him a sense that art and architecture can be seamless. The two remained close until Balazs died in 2017, with Kundig taking part in the eulogy. 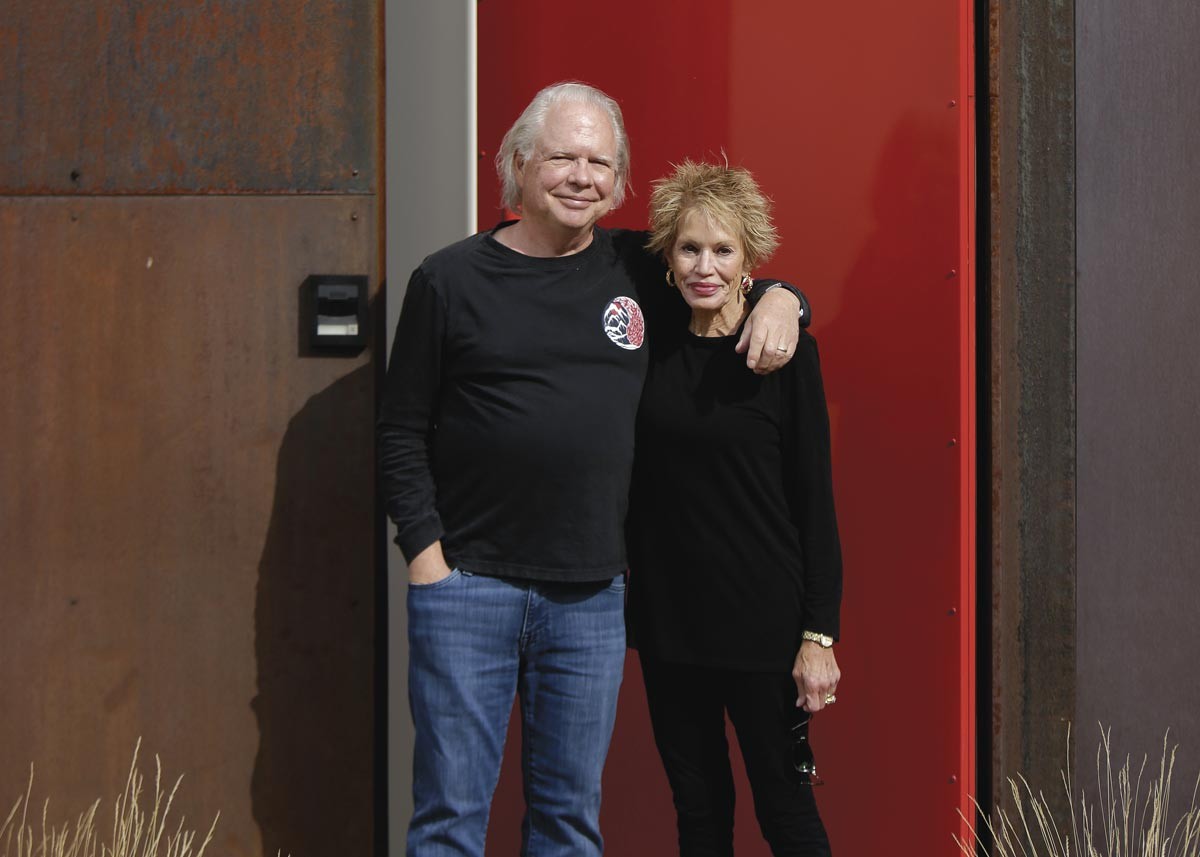 Proceeding down the sedate entry corridor leads to a carefully crafted dramatic reveal in the form of a flood of light in the home's living area. Expansive, 270 degree territorial views through the room's floor-to-ceiling windows include the Spokane River winding far below to one side and the home's natural treed landscape on the other.

But inside the home, the views are equally rewarding. Over the fireplace, a Robert Motherwell print, which Paul says is one of his favorite pieces of art, anchors the space. A glass display case tucked in among the kitchen's walnut cabinetry reveals three colorful Dale Chihuly bowls. Paul's love of Oaxacan art is also frequently on display, with colorfully painted wooden figures tucked into display cases throughout the home. Hmong tapestry art thoughtfully adorns a bed in a guest room, while a nearby quilt stand features a quilt created by Mack's great-grandmother. Upstairs, the primary bedroom features water colors by Paul's mother.

Kundig's attachment to Rimrock is also personal on many levels. "The clients came to me specifically because they saw me as a local boy who did all right," says Kundig, whose accolades include an Academy Award in Architecture from the American Academy of Arts and Letters, a National Design Award in Architecture from the Cooper Hewitt Smithsonian Design Museum, and election to the National Academy as an Academician. He recently completed the acclaimed Burke Museum on the University of Washington campus.

Kundig's regional experience informs several components of the design. "I understand how to live in that environment and how to be thoughtful about that kind of extreme climate – both opening up to it and providing protection from it," says Kundig. "In terms of snow specifically, the way the home hovers above the landscape also prevents snow drifts from collecting directly against the windows, which in turn allows us to have full-height glass to take in those big views," he says. 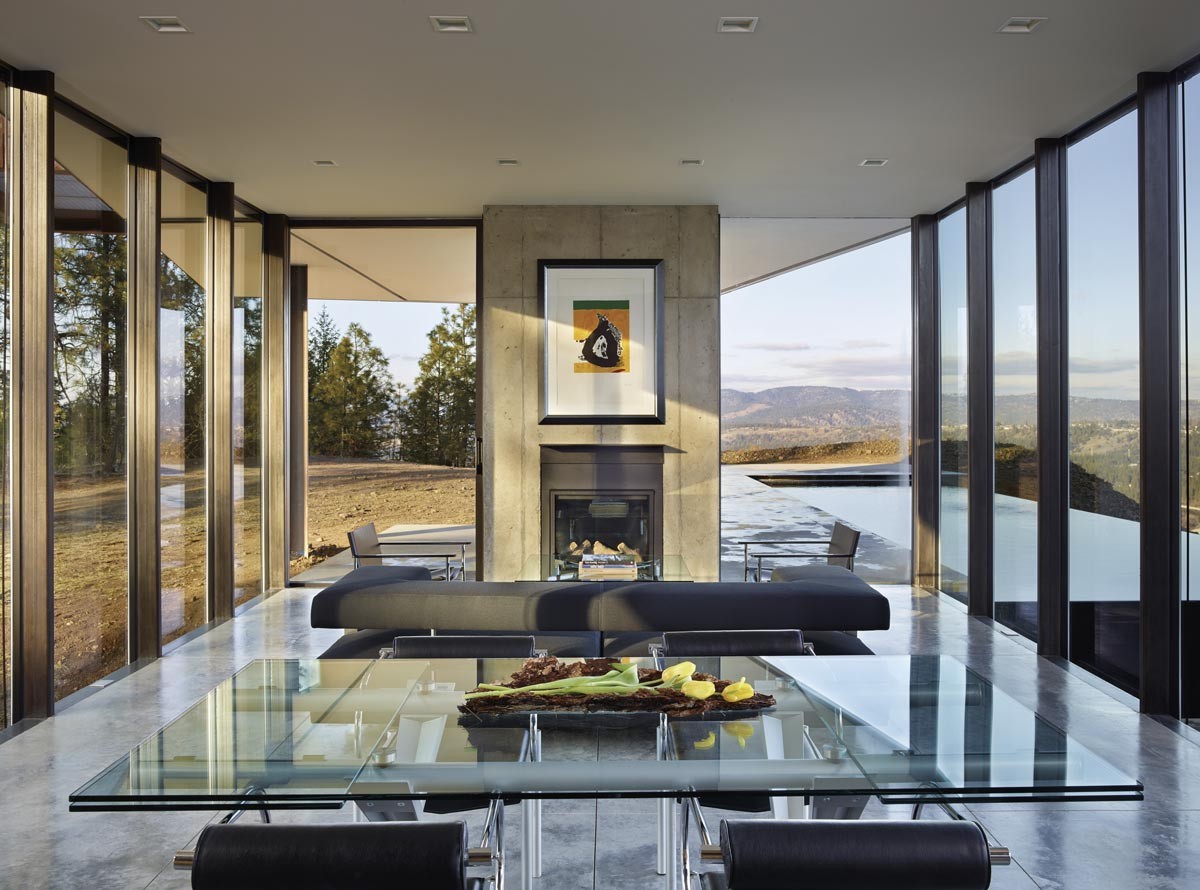 Benjamin Benschneider photo
After proceeding through the vestibule (below), vast views in the home's main living area are dramatically revealed.

Additional environmentally friendly features include automated shades on the exteriors of all windows, which allow the owners to tame the intense sun, thus reducing the energy needed to cool the interior. Those shades also have a side benefit in the main living area that's suspended over the wildlife pathway, notes Paul. Even while lowered, the shades still afford clear visibility of the wildlife crossing, but since the animals can no longer see in, they aren't startled by human movement in the house.

A geothermal heating system built into the concrete keeps the house warm, while a rainwater collection system funnels roof water slowly back into the water system, minimizing erosion.

Overall, the impact of Rimrock is meant to be less, not more, but by taking a minimalist approach, it is more. And it reminds of how famed architect Frank Lloyd Wright designed an iconic Pennsylvania home known as "Fallingwater" to blend harmoniously into the sloping hillside punctuated by rocks, trees and a natural waterfall.

"I wanted to celebrate the landscape as something bigger than us, certainly more beautiful than anything we could design," says Kundig. "The design strives to be somewhat silent to the landscape – from the colors and natural weathering of the materials to the proportions – and to blend respectfully."