An Eye Out For Trouble 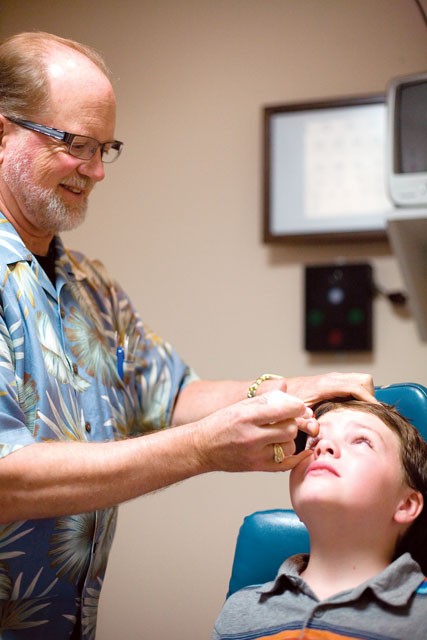 Kim Miller’s business is eyes. In her jobs coordinating surgeries and public relations for Spokane Eye Clinic, she knows the components of an eyeball. She knows how its muscles form, how the light refracts, what happens when eyes form incorrectly and what doctors can do to fix them.

Naturally, she was proactive about her kids’ eye health, having their vision tested as babies and toddlers. Everything checked out OK. But earlier this year, her son Benjamin was struggling in kindergarten.

“His teacher said he was all of a sudden ‘pulling back’ — not participating in story time. But she’d get with him one-on-one, and he had the comprehension,” explains Miller. “Turns out he just couldn’t see the pictures.”

Ben was diagnosed with amblyopia — inaccurate vision caused by a disconnection between the eyes and the brain.

“I was speechless,” Miller remembers. “My husband and I both work in the field, and there wasn’t anything that we could pick up? We were feeling guilty for missing something, but on the other hand relieved and lucky we had caught it during that window of opportunity where we can still have a positive effect.”

Because so many changes occur in a child’s eyes from month to month and year to year, health experts say early intervention is vital. That’s why schools hold vision screening each year starting in kindergarten and the American Academy of Pediatrics recommends doctors include eye tests in all well-child visits.

“Part of the urgency is that kids who have been through all the screenings and prescribed visits can still have a serious problem that has been missed,” explains Ben’s ophthalmologist, Dr. Jeffrey Snow, who recommends that parents stay aware of changing habits at home as well as school. “Squinting or rubbing eyes, tipping their heads, or avoiding reading are all indications that there could be an eye problem.”

Eye growth is “fairly well ingrained by age 6 or 7, but you can still correct it,” says Dr. Snow. Treating amblyopia, for example, can be accomplished with glasses and eye-patching, if a professional discovers the abnormality early enough. “It gets dicey between ages 7 and 9, and after age 9 or 10, eyes don’t respond to treatment.”

“Eye-patching,” a common treatment for amblyopia, involves covering the stronger eye to force the brain to use the weaker eye to see. The ultimate goal is to create “binocular” vision, where both eyes are working together.

“Ben had to do patching six to eight hours every day for six weeks,” says Miller. She did what she could to make it fun. “We had pirate night, where we all wore a patch to dinner. We brought the whole family into it.”

Plus, Ben’s dad is an optician, and he got to help design his own glasses. “We made it a cool thing, and it got to the point where he understood if he didn’t wear his patch and his glasses, he wouldn’t see any better.”

Because vision testing is not mandated in Washington, not all pediatricians offer it as part of routine exams. You can request it, however. Dr. Cicely White says she starts screening by 3 or 4 years old, if the young patient will cooperate.  She says her test is pretty low-tech: a Snellen eye chart in the hallway that children need to read from 10 feet away before age 6, and from 15 feet away thereafter.

Dr. White’s approach to referral is low-tech, too. “If the vision differs between the eyes on two lines, I send them to an optometrist, and if eye movement is abnormal, I will refer them to an ophthalmologist.”

If a pediatrician is the first line of defense, grade schools are the second. Kathy Reed-McKay, Spokane Public Schools’ health services director, says trained parent volunteers conduct initial vision screening (in grades K-5 and grade 7) before November each year. Those students who fail the first screening are screened again by registered nurses. After two “failed” screenings, the district mails a referral for a professional eye exam to parents.

Dr. Snow says the school screenings are effective at catching about 95 percent of amblyopia or strabismus (commonly known as “crossed eyes”). So how do the others get missed?

“Children hate to fail,” says Snow. “There’s a temptation to do well, so they peek around and see with their good eye… Even working in our office with young patients all the time, we’ll have a kid who’ll fool us.”

Dr. White says she’s on the lookout for these “resilient” patients, and she considers vision a key part of children’s overall health.

“It’s so important to have early intervention,” she reinforces. “We see complications in learning and development — the problems we perceive to be educational are really seeing issues.”

Just ask Benjamin Miller, who — after just seven months of glasses — is already “seeing four lines better” than in December. His mom explains that, with glasses, he can now see at about 20/40. Pretty good, considering that if they’d missed his cues, Ben may have lost the use of his weak eye.

“I just don’t think people understand,” warns Miller, “that if you miss that opportunity, there is vision that can’t be regained.”