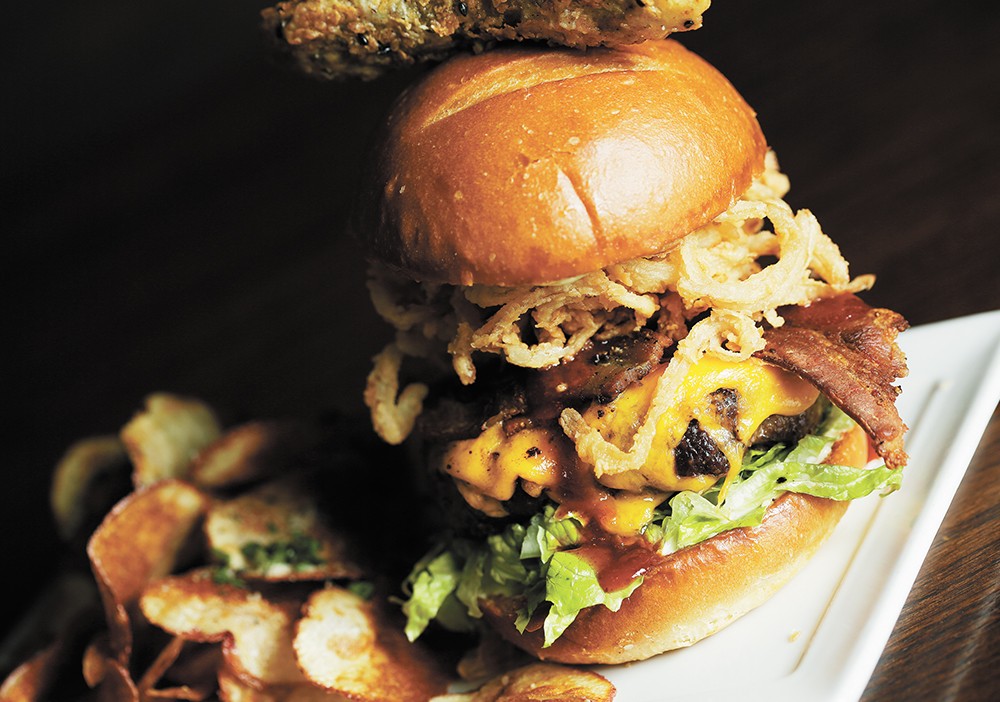 Young Kwak
Downriver Grill serves a different "Burger of the Moment" on Wednesdays.

On Monday nights, the diminutive small-plates restaurant and craft-cocktail bar on the corner of Monroe and Mallon turns into a fast-food-inspired diner, with burgers and sandwiches all modeled after familiar favorites from some of the country's biggest drive-thru chains. Though items on the weekly menu often rotate, chef-owner Tony Brown says one mainstay features "two all-beef patties, special sauce, pickles and onions on a sesame seed bun." McRuins' format is walk-up counter ordering, so seat yourself when you get in. There's also super cheap canned beer ($1 cans of Olympia), and plenty of tasty, house-made dipping sauces.

Also on Mondays, fans of Prohibition Gastropub chef-owner John Leonetti's burgers — the patties are infused with coffee grounds, which keeps them juicy no matter how they're cooked, and are often topped with his signature candied bacon — can enjoy special one-offs during Burger and Pint Night. Recent specials include a German-inspired burger with stone-ground mustard aioli, and a spaghetti-themed burger. Each week's burger includes a pint of beer from Prohibition's featured brewery of the month (January is New Belgium; February is Georgetown; diners also get to keep their pint glass). Find a preview of the week's specials on Facebook and/or Instagram.

No matter how far afield you are, a trip up north to 1898 Public House — especially on Tuesday nights — at the Kalispel Golf and Country Club, near Mead, is worth the journey. Tuesday's Burgers and Brews night features two weekly specials to choose from — always at least one Angus beef patty, and something else from the kitchen of Executive Chef Tyler Schwenk, like fried chicken or a veggie-friendly sandwich. Choose from anything on tap to fill your included, 20-ounce glass of beer, along with 1898's many options for french fries, from traditional cut to waffle and sweet potato. A monthly menu of Burgers and Brews upcoming, weekly line-ups can be found at kalispelgolf.com/dining; also check Facebook and Instagram for previews.

The upper South Hill neighborhood pub and grill offers a variety of rotating specials on various days of the week, but Burger and Beer night happens every Tuesday, from lunch through to closing. This weekly special includes any burger on Morty's regular menu — including its "Bourbon Street BBQ," teriyaki and mushroom bacon Swiss burgers — along with the diner's choice of a pint of beer (micro or domestic) currently on tap.

"Burger of the Moment" Night

With all-day happy hour every Wednesday, in addition to the day's featured burger special, this Audubon neighborhood favorite is usually busy (reservations are available; walk-ins also welcome). Unfamiliar diners should understand why as they scroll through Downriver's Facebook feed, showcasing past weeks' "Burger of the Moment," like a Korean barbecue-style one with pickled onions and Thai chili aioli, and one topped with smoked white cheddar, pomegranate barbecue sauce and crispy fried onions. All burgers come with a side of house truffle chips.

Wednesday nights in the lounge at Churchill's have become a well-known favorite for local burger lovers who also love a good bargain. To make the patties for these deeply discounted yet high-quality burgers, the steakhouse kitchen grinds down miscut, slightly underweight, or otherwise "imperfect" USDA prime steaks that can't be served in the restaurant. Wimpy Wednesday is only offered in the cozy, basement lounge, which does not accept reservations (and is only open to ages 21+), so get there early if you want to grab a spot without a wait.

For nearly five years, guests of this eatery in the heart of downtown Coeur d'Alene have been enjoying discounted burgers and beverages every Thursday night. The first-come, first-served (no reservations; lounge only) special not only includes Seasons' signature Kobe beef burger, but also ground chicken, andouille sausage, salmon, buffalo and falafel patties. Restaurant manager Traci Acireno say Seasons' bargain-burger night is one of the region's originals, and that many of the aforementioned weekly specials arose after theirs became popular, based on her and other staff's understanding. Included with their burger, diners can choose a pint of any draft beer or a glass of the house red or white wine. ♦

More from The Burger Issue

We couldn't review every cheap burger, but these four classics are worth your appetite

Every server should be able to answer the question: What kind of fries do you have?